The long-haul truck driver and the women he killed

Derek Flynn has written a novel about killer truck drivers. But it’s not quite a work of fiction 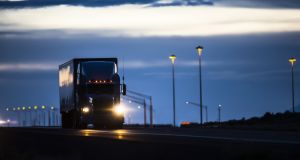 In my new novel, The Dead Girls, ex-cop turned private detective, John Ryan, is hired to find a missing girl. As he investigates her disappearance, he makes a horrifying discovery: hundreds of women who were abducted and murdered over a 30-year-period, their bodies dumped on the side of the highways of America. The number one suspects in many of the cases? Truck drivers. But even though this is a novel, this is not fiction.

When I was about to write my second novel, I read an article that had been written for GQ magazine by Vanessa Veselka, called “The Truck Stop Killer”. In the article, Veselka talked about how in 1985 she had run away from home as a young girl.

Hitchhiking around the US, she had terrifying encounter with a truck driver who pulled a hunting knife on her and told her to get in the back of his cab. She tried to reason with him but to no avail.

Eventually, he told her to run, which she did. She hid in the woods and stayed there until she saw the truck pull away. She never reported it to the police.

Years later, Veselka read a news story about a serial killer who had been a long haul trucker named Robert Ben Rhoades. It brought her back to that terrifying night in 1985. She started to research Rhoades and what she discovered was astonishing.

In 2004, an analyst from the Oklahoma Bureau of Investigation discovered a pattern in the cases of a number of murdered women whose bodies had been found along Interstate 40 which runs through several states in the US.

The analyst contacted local law enforcement in a number of states where the women’s bodies had been found to inform them that there might be a link between the murders. FBI analysts then began investigating to see if there were any other similar patterns among murders committed on the highways. There were.

Over time, the FBI discovered that there were more than 500 murder victims who had been dumped on the highways of America over the course of 30 years. The victims in these cases were usually runaways or women who lived transient lifestyles, and were often involved in substance abuse and prostitution. And the majority of suspects in the murders are long haul truck drivers – truck drivers like Robert Ben Rhoades.

Rhoades was a sadistic serial killer who had converted the sleeping area of the cab in his truck into what was essentially a mobile torture chamber. He would pick up runaways or prostitutes, keep them captive in the back of the cab for weeks on end, torturing and raping them, and finally murder them and dump their bodies on the side of the highway.

He was eventually convicted of three murders and is currently serving two life sentences, although it’s believed he may have killed up to 50 women. But Rhoades is not alone, and the figure of 500 victims may only be the tip of the iceberg.

In the documentary, The Killing Season, filmmakers Rachel Mills & Joshua Zeman spoke to Professor Kenna Quinet, who has written extensively on the subject. “I’ve been quantifying serial murders since the 1980s,” Quintet says. “Since then, I’ve realised that we were undercounting an entire pool of victims which I eventually called the “missing” missing.”

Professor Quintet classifies the “missing” missing as victims who are never actually reported missing, so no one – including police – are ever looking for them.

When asked by the filmmakers how many “missing” missing there are, Quintet replied: “How would we know? How would we know how many missing persons had never been reported as missing? It could be a couple of thousand people a year easily ... over the course of a decade we could be talking about 20,000 people that we have no missing persons report on and we had no idea they were a homicide victim.”

When I read this article, I felt this was an opportunity to write a crime story that also looked at the dispossessed in our society. Young women who are runaways, who are homeless, and who turn to drugs or prostitution, or both, in desperation. And then they are abducted and murdered, their bodies dumped along the highway, and no one knows, or no one cares. They just fall through the cracks.

As one of the commentators says in The Killing Season: “Truck stop prostitution ... that is the lowest rung of prostitution. It’s pretty much the people that are absolutely desperate for money. The girls know that they’re sort of the bait out there for serial killers. They’re the blood in the water that the sharks just can’t resist. And they’re a part of our population that we’ve totally marginalised. If they disappear and you report them missing, and you say she’s a known prostitute, there’s no sense of urgency to find you. And there’s a chance, until someone finds a body, they’re not even looking for that person.”

Derek Flynn’s new novel, The Dead Girls, is on sale now on Amazon, and on his website www.derekflynnbooks.com