VS Naipaul, who chronicled unravelling of British Empire, dies aged 85

Nobel laureate, who was born of Indian ancestry in Trinidad, has left a complex legacy 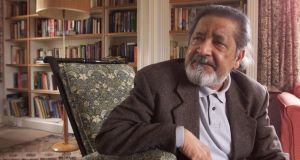 October 2001: VS Naipaul, who was born of Indian ancestry in Trinidad, went to Oxford University on a scholarship and lived the rest of his life in England. As a novelist he exempted neither coloniser nor colonised from his scrutiny. Photograph: Chris Ison/PA Wire

VS Naipaul, the Nobel laureate who documented the migrations of peoples, the unravelling of the British Empire, the ironies of exile and the clash between belief and unbelief in 14 often unsparing novels and as many works of nonfiction, died on Saturday in London. He was 85.

His wife, Nadira Naipaul, told the Associated Press that he was “a giant in all that he achieved and he died surrounded by those he loved having lived a life which was full of wonderful creativity and endeavour”. In many ways embodying the contradictions of the postcolonial world, Naipaul was born of Indian ancestry in Trinidad, went to Oxford University on a scholarship and lived the rest of his life in England, where he forged one of the most illustrious literary careers of the past half century. He was knighted in 1990. Compared in his lifetime to Conrad, Dickens and Tolstoy, he was also a lightning rod for criticism, particularly by those who read his portrayals of Third World disarray as apologies for colonialism.

Yet Naipaul exempted neither coloniser nor colonised from his scrutiny. He wrote of the arrogance and self-aggrandisement of the colonisers, yet exposed the self-deception and ethical ambiguities of the liberation movements that swept across Africa and the Caribbean in their wake. He brought to his work moral urgency and a novelist’s attentiveness to individual lives and triumphs.

Naipaul personified a sense of displacement. Having left behind the circumscribed world of Trinidad, he was never entirely rooted in England. In awarding him the Nobel Prize in literature in 2001, the Swedish Academy described him as “a literary circumnavigator, only ever really at home in himself, in his inimitable voice”. Yet his existential homelessness was as much willed as fated. Although he spent his literary career mining his origins.

Naipaul fiercely resisted the idea of being tethered to a hyphen, or to a particular ethnic or religious identity. He once left a publisher when he saw himself listed in the catalogue as a “West Indian novelist”. A Hindu, though not observant, Naipaul was a staunch defender of western civilisation. His guiding philosophy was universalism. “What do they call it? Multi-culti? It’s all absurd, you know,” he said in 2004. “I think if a man picks himself up and comes to another country he must meet it halfway.” It was the kind of provocative statement that won him both enemies and admirers over the years.

An often difficult man with a fierce temper who dressed sedately in tweed jackets, Naipaul had a face of hawklike severity. “After one look from him, I could skip Yom Kippur,” Saul Bellow once joked. If displeased by questions, Naipaul would sometimes walk out on public appearances and hang up on journalists. Although he could be mischievous and had a deep sense of humour, he was prone to melancholy.

Naipaul practiced yoga until his back grew too weak, and often lamented that writing took a physical toll. He would spend months cogitating at home in London or more often in his book-filled cottage in the Wiltshire countryside, outside Salisbury, which he shared with his first wife and later his second, and with a black-and-white cat named Augustus. He continued to write novels even after declaring the form a 19th-century relic, no longer able to capture the complexities of the contemporary world. Yet his fiction was always in conversation with his nonfiction; each new book built on the ones that came before.

Naipaul wrote relatively slowly, sometimes only a paragraph a day, and was intensely protective of his work. Diana Athill, who edited 19 of his books at the London publisher Andre Deutsch between the 1950s and 1970s, said editing Naipaul involved providing him with much reassurance.

Vidiadhar Surajprasad Naipaul was born August 17th, 1932, in Chaguanas, Trinidad, where his paternal grandfather had emigrated from India in the 1880s as an indentured servant to work on the sugar plantations. His father, Seepersad, was a newspaper reporter for the Trinidad Guardian and an aspiring fiction writer who as a child was luckily allowed to go to school; his older brother was sent to work in the cane fields for 8 cents a day, and his sister remained illiterate. His mother, Droapatie Capildeo, was from a large, prosperous family, and when Naipaul was 6, the family moved in with them in a big house in Port of Spain. The second of seven children, he was particularly close to his older sister, Kamla. His younger and only brother, Shiva, who was also a novelist, died in 1985. – NYT