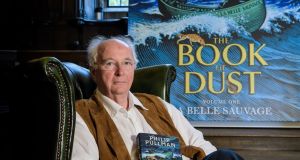 It’s a fair bet that the dreaming spires of Oxford didn’t get much sleep last night as the first book in Philip Pullman’s long-awaited new fantasy trilogy was launched in the author’s home town.

The publication of La Belle Sauvage: The Book of Dust Volume One has been accompanied by the sort of extra-literary hoo-ha which would have another of Oxford’s literary denizens, Inspector Morse, frothing at the mouth. Fans queued up at midnight bookshop openings and scrabbled to get tickets for the first public signing, which will take place at Blackwell’s Bookshop this afternoon.

An audio version, read by the actor Michael Sheen, is to be released simultaneously with the book – and a spanking new two-hour walking tour of the city will guide Pullman tourists around the historic lanes and canals which play a key role in the action.

The celebrations haven’t been confined to Britain. Pullman parties have been going on across Australia, and blanket PR campaigns are under way in India and South Africa. In Dublin, Hodges Figgis are holding a special early-morning opening for launch day on October 19th, which is also the author’s 71st birthday.

Pullman has been working on a follow-up to his epic trilogy His Dark Materials for some time. When he announced in February that he was planning not one book but three – and that it would be neither sequel nor prequel but an “equel”, or companion series – the first volume promptly shot to number one, thanks to pre-orders, on Amazon’s bestseller chart. With the new title appearing just as the pre-Christmas frenzy is about to move into top gear, booksellers are hoping it will provide a sales boost equivalent to that of last year’s Harry Potter And The Cursed Child.

While we should obviously never judge a book by its cover, the wave-tossed blues and greys of La Belle Sauvage’s jacket offer a clue as to the content of the new series. Fans of His Dark Materials – which has sold more than 17 million copies and been translated into 40 languages – will be delighted to learn that the familiar armoured polar bears are back. Ditto the daemons. And the parallel universes. There’s a new central character: 11-year-old Malcolm Polstead, who likes to navigate the River Thames in his canoe, La Belle Sauvage. Through his riverine potterings Malcolm has become friendly with the nuns from Godstow Priory on its banks – who, as the book opens, just happen to be sheltering a baby by the name of Lyra Belacqua.

“I’ve always wanted to tell the story of how Lyra came to be living at Jordan College,” Pullman has explained. “And, in thinking about it, I discovered a long story that began when she was a baby and will end when she’s grown up.”

The Book of Dust will further explore the themes which recur throughout Pullman’s work: the dangers of religious absolutism, and the beauty and mystery of the cosmos. A cosmic particle which is integral to the plot of the earlier books, “dust” refers both to dark matter and to the quotation from the biblical book of Genesis, “Dust thou art, and to dust shalt thou return”.

David Fickling, publisher and editor of David Fickling Books, which is publishing the new series along with Penguin Random House Children’s Books, yesterday compared the first book’s sense of adventure to that of another children’s classic, Treasure Island. “The thing about Treasure Island is, your head comes up, your spirit rises – you know there’s an adventure coming. And that’s exactly the thing about La Belle Sauvage,” he told The Irish Times yesterday.

“Like any great work of art, after you’ve read it you feel enlivened. You want to get out there and discover the world. It is really important to publish something which sparkles, and has great storytelling, and means something. I think he has done a very special thing with this book. For me it’s about life being meaningful in all sorts of different ways. It’s definitely a book against a narrow, single vision. It’s about all the different ways of thinking about the world.”

As for that French title, it may be a Pullmanesque comment on the ongoing epic narrative that is Brexit, which the novelist described in a 2016 Guardian column as a “catastrophe”. According to Fickling La Belle Sauvage can’t be translated without changing the meaning, so it needs to stay as it is. “It’s a pub sign and the name of the young boy’s canoe – which is almost a character in the book itself. It’s a name. A sound. La Belle Sauvage,” he intones, in impressively authentic French.

Fickling has worked with Pullman ever since his second children’s book, The Ruby in the Smoke, came out in 1985. “He burst upon my head, full blown, like a genie out of the heavens, and he hasn’t changed,” he says. “I’d never read anything like him – and I still haven’t. Of course he was completely unknown then, but he is the same Philip. He’s a great man, but he’d hate to hear me say that, so I won’t. He would just call himself a storyteller.”