Eamon de Valera: Unfulfilled academic with an iron will 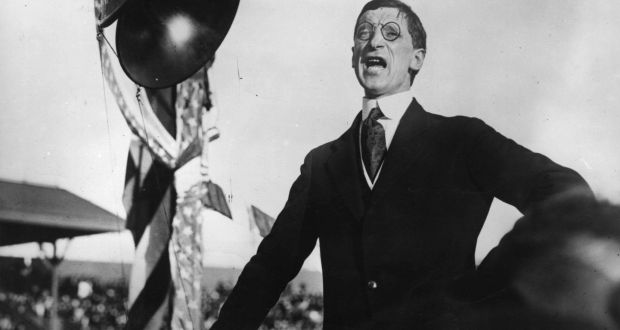 Eamon De Valera addressing a meeting in Los Angeles on his US tour as president of Dáil Éireann in December 1919. Photograph: Hulton Archive

Most Irish biographies start with the premise of seeking to increase appreciation of a half-forgotten figure. An exception to this has, of course, been the case of Eamon de Valera, by far the most written about figure in modern Irish history.

Yet while on the face of it he seems well-known to the public, in truth most views of him rarely go beyond caricature. This is not something which happened by accident. As Diarmaid Ferriter showed in his A Nation Not a Rabble, ‘history wars’ seeking to promote specific narratives of events and personalities in the period 1916-23 began even before the Civil War was over. This has left a lasting trace on how de Valera is seen and discussed.

It is remarkable how many of the core questions and interpretations concerning him established in partisan works of the 1920s and 1930s remain embedded in both popular and, to a lesser extent, academic opinion. It is almost as if the demand on later generations has been that we pick sides rather than adopt new and more challenging perspectives.

It is not controversial to say that de Valera is rarely given the benefit of the doubt on any issue and is often denied the respect which is otherwise common among our democratic parties when talking about important figures in each others’ traditions.

A recent joke at his expense by the Taoiseach when speaking in TCD was a notable example of this – particularly as there were many generous things which could have been said about his relationship with that institution.

De Valera has been presented as a person who, in the phrase which Tim Pat Coogan used to sum up his 1993 charge-sheet dressed as biography, “did little that was useful and much that was harmful”.

Thankfully this has been challenged by much deeper work with, among others, Ferriter and the late Peter Mair and Ronan Fanning showing the almost absurd inadequacy of such a dismissal. As Fanning put it, the real challenge is not to push the case for or against, but to understand the need to reconcile “failures and greatness”.

This is the background to the publication of the first volume of a new de Valera biography by David McCullagh. As well as being one of our most prominent broadcasters, McCullagh is an established historian of Irish politics. His previous books have addressed the career of John A Costello, the first Fine Gael taoiseach, and the governments which he led.

This volume takes de Valera’s story from his birth in New York through to the victory of his Fianna Fáil party in the 1932 election. It is the product of six years of obviously intense research which is striking in its breadth.

As it ends in 1932 it does not cover his time in government, and particularly the achievements of the 1930s and 1940s which Fanning and Mair, in particular, argued represent a period of greatness which stands out in an international context. It is therefore necessarily more personal and dominated by more controversial events.

McCullagh is particularly impressive in showing the extraordinary hurdles which de Valera had to overcome in his first decades. He had a more difficult and modest background than any Irish leader before or since and could have achieved nothing without an iron will.

Sent back from America to Ireland by his widowed mother, he was raised by her family on a tiny, poor farm in Bruree, Co Limerick. He was able to obtain a secondary and then university education through ability alone and had to manage many responsibilities in order to complete them.

De Valera was talented at maths but lacked the opportunity to immerse himself in studies, therefore leaving open the question of how good he was or could have been.

His status as, in the public’s view, the most significant surviving leader of the 1916 Rising began his rapid ascent to the centre of Irish public life – a place where he was to remain longer than any major figure in a 20th-century democracy.

McCullagh gives significant new colour to the well-established progression of events from the Rising, through the War of Independence, his time in America, the Treaty split, defeat of the republican forces, establishment of Fianna Fáil and its rapid rise.

It is interesting how the evidence presented by McCullagh shows a long-term commitment by his opponents to present him as exotic and non-Irish. As de Valera and others withdrew from the Dáil chamber they were met with the roar of Collins: “Foreigners. Americans. English.” As late as 1932, George V is reported as having said that de Valera “was, as far as he could discover, not an Irishman at all”.

This is a rigorous work which is, overall, not sympathetic to its subject. It leaves you hoping that the second volume will be less narrative-based and give the author more space for broader interpretations.

There are three general concerns with the chosen approach.

First is the sense of de Valera being subjected to a level of microscopic examination applied to no other figure – placing him at an obvious disadvantage. Every error, inconsistency, reversal and obfuscation is documented with others being largely seen as innocent acolytes or pure-hearted opponents.

This is surely not McCullagh’s intention, but it is the result of a flowing and accessible style which can be too casually judgemental. The steady accumulation of these judgements presents him as a pedant who never met a joke he couldn’t destroy and was surrounded by a mixture of slavish loyalists and reluctant opponents.

The second concern is that this close personal narrative deprives us of the broader context of de Valera’s times and how he was very much representative of those times both in Ireland and internationally.

For example, McCullagh suggests that his background and unfulfilled academic ambitions caused him to follow an approach of “reinventing himself, first as a gentleman student, then as an Irish language enthusiast, then as a Volunteer, then as a Republican….While this was emotionally satisfying, it might be wondered if it was emotionally healthy.”

This same assessment could be applied to hundreds of thousands of people at that time engaged in social mobility, political and cultural revivalism and rapidly-changing allegiances. Are we to see people whose identities changed because they were inspired by the Gaelic League, Irish Volunteers and republicanism as inherently emotionally unhealthy?

Given that these “reinventions” are found with the majority of our revolutionary generation, could not the same point have been made about de Valera’s opponents?

When you step beyond the purely Irish context you find that cultural and political revolutions are found throughout Europe and especially in the many struggles for creating new states.

Robert Gerwarth of UCD in his recent The Unvanquished: Why the First World War Failed to End has shown us a much more challenging perspective. In reviewing the period 1916-23 he finds remarkable commonalities through Europe in terms of nationalist ideologies, revolutions, civil wars, both state and anti-state paramilitarism, institution building and so on.

While Ireland plays only a small role in his research, Gerwarth’s work is a clarion call to Irish historians to understand how many factors we look at as particularly Irish are actually representative of much wider forces.

The final, and surprising, concern with McCullagh’s valuable book is that it fails to convince on why so many chose to support de Valera and his parties. It is impossible to understand de Valera without accepting that he was incredibly successful in persuading people who had previously opposed him, and who were exposed to substantial propaganda directed against him, to switch their support to him.

His rise to power simply could not have been achieved just with “magnetism” enrapturing his supporters and “parish pump” politics. What about the role of an obviously radical programme? Or the conspicuous governing failures of his opponents?

This is an interpretation which does too little to understand both the independent personalities who followed de Valera and the decision of so many in the public explicitly not to follow Civil War divisions.

Look, for example, at the case of Patrick Lynch. Lynch, a widely respected, independent and accomplished barrister, stood for the Irish Parliamentary Party against de Valera in the 1917 Clare by-election which is viewed as a decisive moment in cementing the new direction of public opinion.

Twenty years later Lynch was to be found, still widely respected, independent and accomplished, as a member of Fianna Fáil, serving as attorney general under de Valera and involved in the drafting and implementation of our country’s republican Constitution. It would be nice to know more about what inspired this decision to work for de Valera.

Only when the second volume is published will we see the fullness of McCullagh’s research and hopefully he will give himself the space to address the fullness of such a complex and compelling figure.

Micheál Martin is the leader of Fianna Fáil