Violence on the basis of difference is still a real challenge for both parts of this island. A new book documents victims’ experiences and government responses 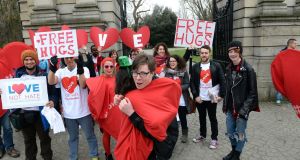 A protest in Dublin last year calling for legislation against hate crime in the Republic. Photograph: Cyril Byrne

Northern Ireland and the Republic occupy different positions with respect to criminal justice responses to hate crime. Northern Ireland has introduced legislation which provides for an aggravation of sentence where hostility towards the victim’s race, ethnicity, religion, disability or sexual orientation is established. This legislation has had a decade to “bed in” and Northern Ireland has moved on to enhancing its implementation.

In the same time period, the Republic in contrast began to scale back on its structures to address discrimination and ensure equality, with radical cuts to anti-discrimination action plans and equality bodies. Thankfully the scale back now appears to be in the process of being repaired. An energetic Human Rights and Equality Commission has been established with many initiatives under way, and recent State migrant integration and disability strategies have been developed. That said, there is only brief reference in recent strategies to hate crime, and government action to date to progress hate crime legislation has been lamentable, making Ireland one of the only western European countries without standard hate crime legislation.

As a society, Ireland is becoming more open and inclusive. The last couple of years have seen some well publicised advancements. In 2015 the citizens of Ireland came out in force in favour of marriage equality. In the same year, the Government of Ireland passed legislation confirming the right of trans people to have their gender identity legally recognised. Last year the then Taoiseach formally recognised the Traveller community as an ethnic minority group.

The structures of the State are incrementally coming to terms with a more cosmopolitan population, as the population itself demonstrates growing expressionof difference. But there are other sides to contemporary Ireland. There remains a minority of peoplewho not only harbour prejudice towards diversity, but feel that they have the right to act on the basis of that prejudice, using violence, hostility and aggression as a means to push those among us who don’t conform to their personal standards of acceptability, to the outer margins of society. When people commit criminal acts against individuals because of their identity, it is a hate crime.

Contributors to our recently published collection, Critical Perspectives on Hate Crime: Contributions from the Island of Ireland, address the manner in which hate crime presents itself in the “Republic of opportunities”. The young learning disabled man who was kicked to the ground, and told by his attackers that they were going to set him on fire and rape him. The man with a Yes Equality badge who was punched in the head. The taxi drivers who have been assaulted while doing their job because of the colour of their skin. In all these cases, the attacker used language during the course of the offence which made it clear to their victim that they did not consider them welcome in our society.

Hate crime does not just happen in the streets. A Traveller family had racist terms spray-painted on their windows. A Black family had similarly racist slogans painted all over the front of her house. For such families the violence rarely takes the form of a single incident, but is usually part of a pattern of intimidation, which denies them a sense of safety even in their own homes. The impact that these types of crimes have on their victims is significant. In many cases these families leave their home to escape the constant sense of threat. Their children carry with them the effects, not merely of the acts of vandalism or property damage, but perhaps equally impactfully, the rejection – of their identity, of their belonging.

The violent targeting of difference often forces its victims out of the public sphere – off public transport, off the streets – and compels a retreat out of society to spaces they perceive as safe. Many victims talk about trying to change who they are, and trying to hide their difference, to reduce the risk of future attack. Families of learning disabled people, who have struggled for so long to empower their loved one to have autonomy and liberty, feel forced to retract that freedom in order to ensure their safety.

The contributors to this book have documented the experiences of individuals and communities in Ireland who have been victims of hate crime, the work of the advocacy groups who support them, and the State’s response to the phenomenon. The book presents contributions from academics, activists, policy makers and practitioners, and perspectives from a range of disciplines including sociology, law, social policy, criminology and equality studies.

The range of identity groups whose experiences the book addresses includes racialised minorities; disabled people; Traveller and Roma communities; lesbian, gay and bisexual people; the trans community; sex workers; and communities affected by sectarianism. The evidence presented makes it clear that violence on the basis of difference continues to be a real challenge for both parts of this island in the 21st century. While prejudice can manifest in a local dialect, patterns of nonsectarian hate crime victimisation north and south of the border share commonalities which reflect the current globalised stratification of social statuses.

In 2016, An Garda Síochána recorded a hate crime nearly every day. Research suggests that these figures are unrepresentative of the true prevalence of hate crime, and that the real statistics are likely to be much higher. For some communities, hate crime becomes something they expect to happen, something that, instead of reporting to the Garda, they just brush off. It is exhausting. It is normalised. It is unacceptable.
Critical Perspectives on Hate Crime: Contributions from the Island of Ireland , edited by Amanda Haynes, Jennifer Schweppe and Seamus Taylor, is published by Palgrave Macmillan and is launched tonight at 6.30pm at the Royal Irish Academy, 19 Dawson Street, Dublin, with guest speaker Emily Logan, Chief Commissioner of the Irish Human Rights and Equality Commission