The SoCoDu rugby-loving idiot savant does not translate internationally. That’s a good thing 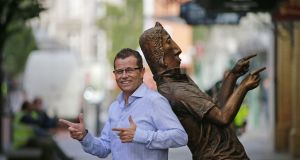 People of Ireland, let us come together today to praise Ross O’Carroll-Kelly. Schmidt Happens, Paul Howard’s latest outing for the beloved SoCoDu idiot savant, hits bookshops on August 29th, representing an extraordinary run of sustained comedic excellence. Over the course of 21 years, 18 novels, three plays and God knows how many newspaper columns, Howard has explored nearly every nook and cranny of our absurd consumerist era as filtered through the eyes of his latterday chino-clad Candide.

If you were to ask what should go into a time capsule to explain post-millennial Ireland to future generations, I’d nominate the complete works of Ross O’Carroll-Kelly as the first item in the box.

But there’s something else about Howard’s brilliant creation that’s particularly worth noting and, I think, celebrating, even though many may see it as a sign of failure. Ross doesn’t travel particularly well. He hasn’t transferred to the West End. The New York Times bestseller lists will not be troubled by Schmidt Happens’s presence. We have yet to see him in a cinema or on Channel 4 (although never say never).

Why is this a good thing? First, it proves that it’s possible to create entertaining, high-quality satire that achieves commercial success purely on the basis of its popularity in Ireland. International sales are fantastic, of course, particularly for whoever gets the royalties, but anything that helps rebut the national inferiority complex that sees acclaim abroad as the proof of true quality is to be celebrated.

Also, it demonstrates that we need to maintain a space for stuff that nobody except us will ever completely get. This is not a given; it can be easier in some cases than in others. It’s not an accident that Ross was born on the pages of a newspaper (the much-missed Sunday Tribune), where the target audience is exclusively local. In other creative areas, the needs of the international marketplace must be considered from the beginning. It’s hard to imagine a scenario where Ross comes into being if the final editorial decision came from London, for example.

A long time ago – so long ago that I’m hoping the confidentiality clause has expired – I found myself on the jury for best Irish film at the Irish Film and Television Awards. My fellow jurors were mostly drawn from the great and good of the international Anglophone moviemaking business. I was absolutely convinced that Lenny Abrahamson’s Adam & Paul was the clear winner. They just didn’t get its blend of hard-edged realism and Dublin absurdism. It didn’t win.

This minor setback hardly hindered Abrahamson on his journey to becoming the country’s most acclaimed filmmaker, but I’ve often thought back to that jury conversation as encapsulating what can happen when culture gets stuck at an international border. My fellow jury members were broad-minded, intelligent, cine-literate people. They weren’t looking for simplistic stereotypical “Irish” stories. They just didn’t see what I and other Irish people saw in Adam & Paul.

As with all cliches, there is truth in the dictum that universal truths may be found in local stories, but sometimes the local just remains local, and that should be fine, too. We should acknowledge that Ross O’Carroll-Kelly is just as much of a comic achievement as Father Ted or Derry Girls or Catastrophe.

Across every art form, international success is still equated too easily with creative validation

Because of the costs of production, film-making in a country of Ireland’s size, unless it’s extremely low-budget, is nearly always subject to the perceived market demands of investors from elsewhere. Newspaper columns, novels and plays, on the other hand, don’t have quite the same pressures to achieve scale through international sales.

But across every art form, international success is still equated too easily with creative validation. This is particularly true when it comes to the sort of popular culture that’s produced outside the officially sanctioned, often State-supported channels of subsidised theatre or literary fiction. In the past, TV drama and comedy was similarly focused, albeit intermittently, on exclusively local audiences. Now all the talk is of international co-productions and sales to the big players in the new global streaming marketplace. With traditional broadcast and print media in retreat, it’s going to get harder and harder for new voices to break through.

All the more reason, then, to love the little goy, even if he’s a narcissistic monster in Dubes.