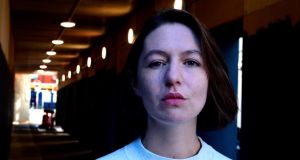 “A startled deer with sensuous lips”: what comes to mind? A hellish phantasm of a doe-human hybrid that will stalk and kill you in a dream tonight? Or Sally Rooney’s face?

Writing in the Swiss newspaper Tages-Anzeiger, Martin Ebel, a 64-year-old literary critic, has provoked anger and internet fun for his review of the Irish writer’s novel Conversations with Friends, which praises her “promising” physical appearance (like a terrifying chimera, apparently).

Using the hashtag #dichterdran – a German pun on “male writer” and “that’s more like it” – readers took to judging male writers on the terms usually reserved for women. One tweet read: “Jean-Paul Sartre could never escape the intellectual shadow of Simone de Beauvoir. Therein lay the tragedy of his existence.” Or: “As the husband of Marilyn Monroe, Arthur Miller had no difficulty finding a publisher.”

Rooney is not the first woman to be diminished by a male journalist who was distracted from her professional abilities by her real-life circumstances, such as having a banging bod, or being stabbed by the right man – as seen in the case of the late Adele Morales, an artist and one of Norman Mailer’s unfortunate wives, whose New York Times obituary ran under the headline “Wife Mailer Stabbed Dies at 90”. Also consider the Australian newspaper’s obit of the nation’s then-bestselling author, Colleen McCullough, which started: “Plain of feature, and certainly overweight, she was, nevertheless, a woman of wit and warmth.”

Creepiness tends to flare up while in the presence of female celebrities. Take the Esquire profile of Megan Fox that called her “a screensaver on a teenage boy’s laptop, a middle-aged lawyer’s shower fantasy, a sexual prop used to sell movies and jeans” – as if they were entirely above asking her to pose in her pants on the cover (they weren’t).

A male journalist writing in Vogue waxed lyrical about feeling “protective” of the “doll-like” Selena Gomez and her “tiny waist”.

Another Esquire profile gave us an extended ode to Lana Del Rey’s lips: “She looks like the spawn of a postoperative Nicole Kidman; and her lips – not just plumped, Bratz-style, but flat, as if she’s pressing them against a window.”

Or a Vanity Fair profile of Margot Robbie that described her as “beautiful, not in that otherworldly, catwalk way but in a minor knock-around key, a blue mood, a slow dance”. (In a blue mood, Robbie called it “really weird”.)

From a 1960 profile of Brigitte Bardot that called her a “sassy kitten” to a 1995 Rolling Stone profile of Alicia Silverstone, who was then “a kittenish 18-year-old movie star whom lots of men want to sleep with”, we have learnt one thing: keep these men away from cats.

Why so many male writers elect to write so superficially about women remains a mystery. (I never see praise for Martin Amis’s fantastic arse, more’s the pity.) Perhaps beauty is the trait men feel most qualified in recognising in women, over intelligence, wit and insight. That is a nightmare even a terrifying woman-deer monstrosity can’t beat. – Guardian