It works for me to write as two people: I’ve always had a lot of ideas and I like trying new things 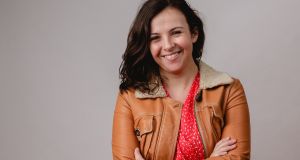 Claire McGowan: luckily my agent was supportive of me writing a funny, light-hearted love story as well as a pitch-dark crime novel.

About five years ago, I found myself with a dark secret. Instead of writing about the murders, lies and traumas I was contracted for, with my Paula Maguire crime series, I was sneaking off behind that book’s back. I was writing about love, flirtation, a turning-30 life crisis. I was making jokes about Beyoncé and online dating. I was writing….a romcom.

Chick lit. Rom com. Commercial women’s fiction. We don’t have a good way to describe this kind of book. When I say I write crime fiction, people get it right away. But when I say I also write another kind of book, under the name Eva Woods, I start to stumble. “It’s like romance,” I might say. “But it deals with serious issues.” Or: “It’s called uplit now.” Turns out no one outside publishing has heard this term, coined to describe a kind of sad-but-happy book in the vein of Eleanor Oliphant Is Completely Fine, or my own How To Be Happy. My agent describes the tone as “laughter through tears”, and the books often cover death, abuse, serious illness, suffering. Despite this they are extremely likely to be given a pastel-coloured cover.

In 2014, the book I was writing was definitely a romcom. Looking back, it was a reaction to my life circumstances at the time. I’d just got divorced, I was worried I’d never meet anyone again, and I was also broke, as you tend to be when you get divorced. I either had to get a job or sell another book quick. Luckily my agent was supportive of me writing a funny, light-hearted love story as well as a pitch-dark crime novel. Not every agent or publisher can see authors in both lights. I was also lucky that my publisher was fine with me writing something else on the side; again not all are, and many writers would love to branch out, but feel constrained by their contracts, or simply by not wanting to rock the boat.

People often ask me why I write under two names, and I usually say it’s for branding, because the books are so very different. But it’s also a chance to start again, to be relaunched almost as a debut, with all the buzz that goes with it. I chose the name Eva Woods, which had been my great-grandmother’s.

My first women’s fiction book, The Thirty List, came out in 2015, and yes, it had a pastel cover. It probably means the most to me of all my books, because with it I literally wrote myself out of financial disaster. After another romcom, I started to write something else on the side again. (What can I say; I have a problem sticking to the same thing.) This was also women’s fiction but much sadder, about an unhappy woman who makes a new, irritatingly positive friend – who happens to be terminally ill. It’s about making the most of life and recovering from trauma, and it struck a chord, selling in almost 20 countries. For the last four years, I’ve been writing two books a year, one crime, and one women’s fiction (or whatever we want to call it). This year I will publish two thrillers, What You Did and The Other Wife, and a women’s fiction title, The Man I Can’t Forget.

It’s actually not unusual to have two or even more strands on the go. Writer CL Taylor was first known for women’s fiction as Cally Taylor, before moving on to thrillers. Tammy Cohen writes thrillers as herself, and historical fiction as Rachel Rhys. Stuart Neville writes procedural crime as himself, and has also branched into US-set thrillers as Haylen Beck. Even John Banville has tried his hand at crime, as Benjamin Black. Kate Harrison has three identities; herself for nonfiction and romcoms, Kate Helm for thrillers, and Eva Carter for book-club fiction. I always say there are fewer writers around than you’d think.

My process for writing both types of book is broadly similar – an extremely rough first draft built up writing 1-2,000 words a day, then edited a lot. However, I’ve learned that women’s fiction needs to have much less plot and more focus on character and tone. With crime, it needs to be pacey and gripping above all else. It works for me to write as two people because I’ve always had a lot of ideas, I write a lot, I like trying new things, and I would hate to only be able to write one type of book forever. I have a vague idea I might try something speculative soon as well, with sci-fi elements. I wonder what pseudonym I would use for that.
Claire McGowan’s new thriller, What You Did, is out now from Thomas & Mercer.