The File ar Fhile Five: Above and Beyond the Irish Question

The series answers a spin-off from ‘Why write in Irish?’ – ‘Why translate into Irish?’ 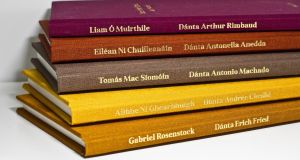 Tomás Mac Síomóin describes how it is by walking that the walker creates a path. The image is a touchstone for a series that makes new inroads into world translation, bringing us above and beyond the Irish question.

Earlier this summer, Cois Life published a series of luxurious limited editions of poetry in translation.

Two of the volumes are from the French, Dánta Arthur Rimbaud translated by the late poet Liam Ó Muirthile and Dánta Andrée Chedid translated by Ailbhe Ní Ghearbhuigh. The series also features translations from Spanish, Italian and German, Dánta Antonio Machado by Tomás Mac Síomóin, Dánta Antonella Anedda by Eiléan Ní Chuilleanáin and Gabriel Rosenstock’s Dánta Erich Fried. The File ar Fhile (Poet by Poet) series answers a spin-off from the well-spun “Why write in Irish?” Book by book and poem by poem, these poet-translators respond to an even harder question – “Why translate into Irish?”

One answer can be found in Gabriel Rosenstock’s volume. In The Paris Review (1992), Italo Calvino’s English-language translator William Weaver complains about Calvino’s weakness for the “wrong” foreign words:

“With the Mr Palomar translation he developed a crush on the word feedback. He kept inserting it in the text and I kept tactfully removing it. I couldn’t make it clear to him that, like charisma and input and bottom line, feedback, however beautiful it may sound to the Italian ear, was not appropriate in an English-language literary work.”

Rosenstock manages to make what feels wrong in English sound right in Irish. In Erich Fried’s Es War, for example, a natural translation for the refrain “Es ist was/ es ist/ sagt die Liebe” might begin “it is what it is”, a phrase so familiar to the speaker of Irish English that it now belongs to the debased language of bureaucrats and bar flies.

Irish is less tied to political cliche and so Gabriel Rosenstock can return “Es ist was/ es ist” to the philosophers and poets. He rejects pithier translations (eg “Tá sé mar atá” or “Sin mar atá”); his slightly longer “Tá sé mar atá sé / a deir an grá” echo in the mind as a welcome Ohrwurm. Rosenstock is a prolific and versatile poet but Fried’s unadorned style seems to particularly suit a new open-and-shut phase in his own writing. “I call that kind of clarity good manners,” he says of Fried. “It is not the reader’s job to solve a poet’s riddles.”

For Eiléan Ní Chuilleanáin, it makes sense to translate the Sardinian poet Antonella Anedda’s work into Irish, another language with its own share of war wounds. Like Rosenstock, Ní Chuilleanáin also refers to “good manners” in her preface. Because Irish-language literature tends to verbal exuberance, she finds herself treading carefully: “I would have to hold back, not come on too strong: be restrained, courteous.” A poem like Coro Venite pensieri ... displays that tact: “Tá earc luachra ar an eibhear./ Tá a bholg ar crith mar uisce tobair./ Tá scanradh air. Tá sé ar aire.” (C’è un geco sul granito./ Il suo ventre oscilla come acqua di fonte./ È spaventato. È attento.) Her reticence is “the silent, beyond silence listened for” that Séamus Heaney spoke of in Clearances.

There is arguably more room for error in translating longer, less antilirico poetry, and certainly, a great number of the File ar Fhile poems share Anedda’s spare dispassion. Ó Muirthile’s selections from Arthur Rimbaud are one exception. In Paul Valéry’s view, “All known literature is written in the language of common sense – except Rimbaud’s”. For a poet like Ó Muirthile, “poetic rage”, a sure antonym for “common sense”, is part of Rimbaud’s captivation and he finds the original bohemian idea difficult to resist. Why translate Rimbaud to Irish?, he asks in his introduction:

“Because – as the early climbers of Everest used to say – it exists. And to see whether a language essentially classical, some would say almost fossilized, could flex itself to sing and even tame Rimbaud’s poetic rage.”

In his version of Being Beauteous, Ó Muirthile draws on one of the most famous Irish poems of the early 18th century, pitching Aogán Ó Rathaille’s aisling into Rimbaud’s passionate vision. Against the odds, these Gile na Gile gambles pay off. In this poem and in Le Bateau Ivre, especially, the preserved remains and past impressions are transformed into a piece of work that flows so freely that it is hard to remember it is a translation.

Best of all, however, is Ní Ghearbhuigh’s more conversational, “Cá bhfuil tú uaim …”, an idiom which translates as “where are you from me”. There is a lighter note in the Irish here, an “oi!, where did you disappear to?” tone that the almost psalm-like English misses (“Where is the distant voice/ That speaks like my soul?”) In her tightly-written introduction, Ní Ghearbhuigh connects Chedid’s bids for freedom with the work of Caitlín Maude. In fact, Ailbhe Ní Ghearbhuigh and the Egyptian-French poet are an even better fit. In Discordances, with its lovely “fannléas” / “fáinleog” fix for “ténèbres” / “hirondelle”, she can do justice to Chedid’s original while still speaking in her own voice.

Forty years ago, Tomás Mac Síomóin resisted Antonio Machado’s poetry, when he was studying Spanish literature at the Instituto Cervantes. It was only when rereading it a lifetime later, familiar as he was by then with Unamuno and the French Symbolists, that in the shadows of the Sierra Maestre he felt the poetry’s own connecting ranges. When Don Paterson translated Machado to English, he set out to bring into existence, “out of the several Antonio Machados... the poem Machado is for me”. Mac Síomóin does something similar when he recreates the work’s “brí fhileata”, a term which denotes “poetic meaning” but also “poetic strength”. This is achieved in subtle ways. For example, he sometimes – but not always – renders the Duero river masculine.

Cois Life and its editor Caoilfhionn Nic Pháidín are to be applauded for realising this series on the suggestion of Liam Ó Muirthile. The selection and the arrangement are quite simply a delight. In his first poem, Tomás Mac Síomóin describes how it is by walking that the walker creates a path. The image is a touchstone for a series that makes new inroads into world translation, bringing us above and beyond the Irish question.
The File ar Fhile series is published by Cois Life
Aifric Mac Aodha’s latest collection is Foreign News (The Gallery Press, 2017)