A 10-step guide to being an Irish writer

Emigrating, swearing and competitiveness are among author Rosemary Jenkinson’s tips 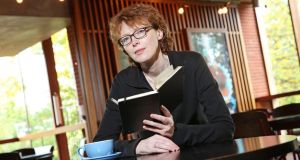 Rosemary Jenkinson: Ireland is an amazing country – sure, how could it not be with Prods and Catholics fighting so fervently over it for centuries?

Emigrate
No self-respecting Irish writer can be truly Irish without undergoing the emigrant experience. Where else could Joyce have recalled “the scrotumtightening sea” of Dublin Bay but from the scrotumloosening warmth of Trieste and Paris? Emigration is so addictive I spent years in the US and eastern Europe, viewing Ireland by long-range telescope, but I also recommend the intimate voyeurism of living next door in England.

Swear copiously and be as scatological as possible
This tactic has been stormingly successful among Irish writers for years, from Brendan Behan to Martin McDonagh, from Lisa McInerney to June Caldwell. If you don’t assault people with language, you’re just not being Irish enough. In Bangor, I once did a reading of a sex story throughout which a Church of Ireland minister sitting in the front row sighed audibly like a Christian martyr – I assume he was more into eschatology than scatology – but if you can’t stand the steam, don’t come into my kitchen. I usually go by George Bernard Shaw’s dictum: “The secret to success is to offend the greatest number of people.” Always remember, a high cunt-count counts!

Write; don’t read
Writing is for writers, reading is for readers. It was the Irish-American writer Mary McCarthy who, looking back on her life, wished she’d written more and read less. Flann O’Brien summed it up even more succinctly: “When I want to read anything, however, I usually write it meself.” In general, it’s much better to generate ideas from your own life than from the work of contemporary writers. For Brendan Behan, “The people writing here now have as much interest for me as an epic poet in Finnish or a Lapland novelist.”

Be unashamedly competitive
It’s in the Irish disposition to be envious of other writers, so own it. “I declare to God, if I hear that name Joyce one more time,” raged Flann O’Brien, “I will surely froth at the gob.” At a recent reading, I mentioned to an eminent Irish poet that her colleague Michael Longley was there too. “He’s not my colleague, he’s my competitor,” she snippily replied.

Live to write, not write to live
We can all be a bit of a rent-a-writer, available for festivals, embassy dos, centenaries and bar mitzvahs – in fact, I would compose toilet graffiti for a small fee – but, like most writers, I find it easier writing books than balancing the books. I still believe in writing for yourself and not for money; far better to be a poor writer than a rich typer. In the end, you can always copy the immortal (take out the t) Oscar Wilde and crack open the champagne on your death bed with the witty quip, “Alas, I am dying beyond my means.”

Be satirical
Satire has a huge tradition in Irish literature stretching from Jonathan Swift to Flann O’Brien to Abbie Spallen. It’s in our DNA to sniff out irony like a pig sniffs out truffles. In Belfast our humour is blacker than Black Mountain, blacker than the Black Man statue and even blacker than a Royal Black Preceptory parade!

Love the pub even to the detriment of your career
“Just keep your arse in the chair,” goes Colum McCann’s recent advice to young writers. I totally agree, with one minor addition. Just keep your arse in the chair in the pub. Years ago I went to London as a shortlistee for the Verity Bargate Award at the Soho Theatre. I lived up to my Irish writer billing and drank so much the next morning I woke up and couldn’t for the life of me remember the name of the agent or the director who’d asked me to send work. Kicking myself, I flew back to impecunious obscurity and more pints. Professionally I’m like the Titanic – as soon as I leave this country I sink. However, it’s still important to party hard; risky living makes for risky writing. Maturity may be a desirable quality in cheese and wine but certainly not in a writer. Everything in immoderation is my motto.

Have a colourful backstory
As we all know, Brendan Behan made a big feature of his IRA background and incarceration; Borstal Boy was his breakout success. Of course, I’m not advocating becoming a bomb-maker over a theatre-maker but having a political past as your USP does help. Look, for example, at the recent success of Irish writers like Laurence McKeown, Richard O’Rawe and Robert Niblock. If another civil war breaks out due to Brexit, it might be an idea to cultivate a paramilitary connection, though, naturally, being a wordsmith is always preferable to a gunsmith, and there’s nothing more explosive than good writing.

Be wordy with brevity
Thanks to our rich dialect, we Irish tend to write like we’re suffering from the verbal skitters. It’s grand to show off, but try to keep your books short. Just because you suffer for your art, it doesn’t mean others have to!

Explore your Irishness right here, right now
Write about the Border, milk that Brexit cow, delight in the fact we’re riding high in world news. Ireland is an amazing country – sure, how could it not be with Prods and Catholics fighting so fervently over it for centuries? Do you think people would fight the same way over England? No chance. George Bernard Shaw had it down when he said, “Write about yourself and your time and you’ll be read for all time.” So, get out your pen and start writing about Ireland, about today and illuminate the chaos that surrounds us (or obfuscate it even more!).
Rosemary Jenkinson’s third collection of short stories, Catholic Boy, is published by Doire Press. She has received a Major Individual Artist Award from the Arts Council of Northern Ireland to write a memoir.

Under the Red White and Blue: Greil Marcus’s Gatsby marred by self-indulgence
4

Galway Film Fleadh online: The highlights of what to watch from wherever you are
Real news has value SUBSCRIBE