Pram in the hall? My problem’s the phone in my hand

If the enemy of art is the pram in the hall, it certainly has some stiff competition from my phone, says author Andrea Mara 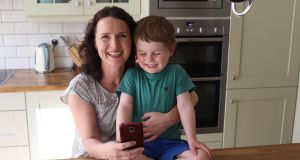 Andrea Mara with her son Matthew, and her smartphone

I’ve been writing for 40 minutes now, and so far I’ve been interrupted by one child, four Facebook notifications, two e-mails, and a WhatsApp message. If the enemy of art is the pram in the hall, it certainly has some stiff competition from my phone.

I don’t know how it is to be a writer without children – writing is something I came to after mine were born. So I can only guess at what it’s like to go from one state to the other, the carefree writer who suddenly finds herself in charge of a small child – the owner of the pram in Cyril Connolly’s famous quote. But having started after kids, I find it’s not so different to any other job – it’s fairly impossible to carry it out when the kids are around, so mostly I don’t even try.

I can’t help reaching out to tend to my phone, responding instantly like an attentive parent. I answer its cry, and for reassurance, I check on it even when there’s no cry at all

I write in the morning when my children are at school, and at night, when they’re asleep. When they’re here in the afternoons, I don’t attempt to work at all – for those few hours, the pram in our hall takes the shape of three loud children, bagfuls of homework and endless toasted cheese sandwiches.

But at night, when they’re finally asleep, I can focus – the pram in the hall is silent.

Except of course, the silence is regularly broken by the most demanding presence of all – my phone, and its incessant, needy cries.

Facebook, Twitter, WhatsApp, and Viber, all with their own distinctive little pings. Instagram with its blessedly silent but nevertheless addictive announcements. Messenger, which sounds like my microwave. Email – three different accounts – lighting up my screen. None of it critical, but often so hard to resist.

When I’m being sensible, I put my phone on silent, and turn it face down. Then as a treat, every hour or so, I sneak a look. Our brains crave newness and shiny things, and after an hour, I need that prize. And I know the right thing to do is to check notifications and swipe them neatly aside – like rocking the baby back to sleep and slipping quietly away – but sometimes I have to pick up.

Then just when I think I’m done, I spot those little numbers telling me about the new posts at the top of my feed. If I click that irresistible refresh button – just once, honest – there’ll be shiny new important (not remotely important) things for me to read.

And like the baby who whimpers in her cot, I can’t help reaching out to tend to my phone, responding instantly like an attentive parent. I answer its cry, and for reassurance, I check on it even when there’s no cry at all. And although my children may have kept me up for nights on end, none of them is as demanding as an always-on phone.

At least with my children, I can compartmentalise. When they’re home in the afternoons they get all my attention – I know they’ll be at school in the morning and in bed at night. But my smartphone doesn’t do compartmentalisation – there’s no school-time or bedtime for social media. And while I have a fairly good grasp of what my children need – education each morning and sleep at night – it seems I don’t have the same understanding of my own needs, or how to stay offline.

In its defence, the internet is now an integral part of writing and research – it can tell you if your fictional hotel name exists in real life, what music was being played in 1990, and how quickly chloroform works (an altogether disturbing bit of research – there are an astonishing number of people who know quite a lot about chloroform). It would be difficult to do research without the internet, so going offline completely can be counterproductive.

It beats the loneliness too – for the work-at-home parent who spends most afternoons listening to spellings and tables, an online chat in a Facebook group can be a sanity saver.

And as my husband has pointed out, I could turn off notifications or delete the apps, but distracting though they are, I like those notifications – those little sighs and gurgles that keep me connected. And sometimes I just need the downtime – to stand by the kettle, to stretch, to pop onto Instagram and enjoy all the pretty. Breaks are good – it’s the rabbit-hole side of things that’s a problem. And nothing else I do has the time-sucking, time-wasting power of a browse on social media.

Of course, unlike my kids, my phone has an off button – I just need to remember to use it. The traditional pram in the hall has nothing on my phone.
The Other Side of the Wall by Andrea Mara (Poolbeg Press) is in shops now and available on Amazon