Buzzing at the Sill review: marginal images of Trump’s America 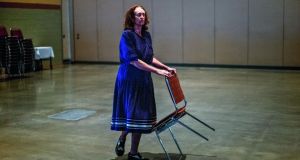 Book Title:
Buzzing at the Sill

Peter van Agtmael, now a member of the famed Magnum photographic co-operative, was a history student at Yale when September 11th brought a chill wind into his life. He became a photographer and worked as a war correspondent in Iraq and Afghanistan, one result of which was Disco Night Sept 11, a book that merged images of military conflict with ones of his troubled homeland. In his new book, Buzzing at the Sill, his camera lens focuses on the country he returned to after the years abroad: what he photographs is equally disturbing.

The book’s title is taken from a poem by Theodore Roethke, In a Dark Time, in which a simile refers to a fly wanting to get to the other side of a pane of glass, seeing where it wants to be but unable to reach the desired place: “My soul, like some heat-maddened summer fly,/ Keeps buzzing at the sill”. The soul of van Agtmael is also perturbed when he comes up close to contemporary America and the feeling that he can’t get beyond what he sees imbues his images with disquiet.

His photographs, published around the time of the recent Republican electoral victory, expose what he calls “the margins of America whose invisibility created the conditions for someone like Trump to succeed”. Part of the genealogy for such indiscernibility is rendered in a shot of a lone woman moving a chair at the annual Ronald Regan dinner for the Republican Party in Des Moines, Iowa. Sarah Palin gave the keynote speech and attacked the press as “people who are out there for the right of journalists to lie”.

Van Agtmael’s camera delivers a truth though he leaves it for the viewer to ponder what this might be. His picture, spread across two pages, is largely taken up with the hall’s empty space and the eye has little choice but to gaze at the forlorn human figure in the centre of the floor; the chair that she is shifting becoming a visual synecdoche for something far more unstable in the body politic.

Issues of race and class that hark back to segregation times recur in the book, and form a motif. In rural Louisiana a woman lines up the balls at a pool table: it’s a “White Night” at a juke joint – a place where black workers were not banned and could meet up for a drink – a monthly blues event for local whites, hosted by the black owners.

Composition is crucial when photographing group scenes and a number of these feature in Buzzing at the Sill, showing how deft and dramatic van Agtmael can be when it comes to this tricky art. One is taken in New Orleans in 2012 and the occasion is a second-line parade, an annual event with post-civil war origins when insurance companies refused cover to ex-slaves. African Americans formed their own benevolent clubs to help cover health and funeral expenses and a public parade each year.

During the parades there were brass bands called the first-line march while members of the public walking behind were known as the second-liners. Such a sense of motion is captured in van Agtmael’s terrific shot of second-liners, with the feet of human walkers patterning the hoofs of a white horse, whose rider works to calm its canter by the side of the accompanying crowd.

Another of his group shots catches a moment after a Kentucky Derby as attendees makes their way home and the viewer’s eye travels with them up and down the street. It is not overtly disquieting and yet even here, especially in the foreground where a concerned adult stoops to listen to a child, there is something that bothers the scene of a holiday’s aftermath.

The design of Buzzing at the Sill is neatly aligned with the spirit of what lies within its pages. The binding is exposed on the outside and the front cover shows a crow, more alarming than a summer fly, at a window.

A text booklet folds out from the book’s back and contains more than a title, place and date for each photo; a melancholy tale accompanies most of them. Reminiscences by van Agtmael are peppered between the body of the photographs, with one recounting a childhood experience of his. Invited to his first sleepover but becoming extremely tired, he is made the butt of jokes by the other boys.

It was, he says, the beginning of “a deep wariness of humanity . . . despite all the goodness of the world”. He associates the sleepover with his decision to become a photographer: the wariness hasn’t left him.