The Red Parts and Bluets reviews – an original author, unafraid of originality 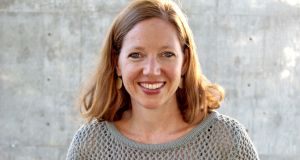 Maggie Nelson, writes symphonically, with shades of those from which she quotes, be it Gertrude Stein, John Berger, Sylvia Plath, WG Sebald

Book Title:
The Red Parts: Autobiography of a Trial

In 2015, Maggie Nelson’s ninth book, The Argonauts – described in this paper by Sinéad Gleeson as “a profound and challenging work . . . part philosophical manifesto, gender treatise, fragmented novel, memoir, love letter and art critique” – won the National Book Critics Circle Award for Criticism in the US and became an instant cult classic. On the back of its success, two of her earlier and equally difficult-to-classify books are being published for the first time in the UK: The Red Parts: Autobiography of a Trial and Bluets.

The Red Parts is, in simplest terms, an account of a murder trial. But little is simple about the case, which had been cold for more than 30 years, or Nelson’s approach to recounting it. One night in 1969, Jane Mixer – the author’s maternal aunt and a student at the University of Michigan – was shot and strangled to death, her body abandoned in a cemetery.

Over the years, Nelson developed an affinity with her murdered aunt, and late in 2004, she was about to publish a collection of poems based on Jane’s diary entries when, with uncanny timing, she discovered that Michigan state police were preparing to make an arrest in the reopened case. In the summer of 2005, Nelson and her mother attended the trial of Gary Earl Leiterman – a retired nurse and grandfather with an addiction to painkillers.

The Red Parts was written in its aftermath and first published in 2007, then again in 2015. In a preface to mark the book’s American reissue, Nelson described it as “a peculiar, pressurized meditation on time’s relation to violence, to grief, thankfully untethered from the garish rubrics of ‘current events’, ‘true crime’, or even ‘memoir’.”

What does it mean to have a murder in the family? Her mother’s lingering fear of becoming the next victim is one of many subjects the book meditates upon, and how this fear “trickled down” to the author, “an inheritance”. Nelson dreams recurrently of confronting Jane’s killer, and yet, one of her “favourite feelings” is “to be alone in public, wandering at night, or lying close to the earth, anonymous, invisible, floating”. This defiance shows itself as surely in the author’s writing as it does in her character.

Nelson balances starkness with sensitivity and salvages beauty from trauma, while also perverting every strong statement – arguing, softly, against absolutes in general and her own convictions in particular. Of Leiterman’s past life as a nurse, for example, and all the “life-sustaining” ministrations he must surely have provided, she wonders: “If he killed Jane, what happens to that care and comfort now? Does it become null and void, retroactively?”

This uncertainty and vulnerability are what is so special about Nelson’s writing. There is always another layer; she scratches them away with teeth and fingernails. The result is a victim impact statement as complex and perplexing as the case itself, as gripping as the “garish” genres it succeeds in circumventing.

In The Red Parts, the author relates how, as a child, she’d asked for her bedroom to be decorated with “everything in rainbows”. In adulthood, her affections consolidated around a single colour. For years, she has irresistibly collected “countless blue stones, blue shards of glass, blue marbles, trampled blue photographs peeled off sidewalks, pieces of blue rubble from broken buildings”, and relentlessly noticed blue scenery; “ . . . turning one’s car around a sharp curve on a precipice and abruptly finding ocean; flipping on the light in a stranger’s bathroom one presumed to be white but which was, in fact, robin-egg blue . . .”

The title of 2009’s Bluets echoes les bluets, the French for “cornflowers”, though Nelson didn’t discover this until after it became her working title. In 240 short, numbered sections – guided by her impeccable ability to discern poignancy – Bluets explores the cultural history of the colour blue. Here are the Aztecs daubing “the chests of their sacrificial victims with blue paint before scooping their hearts out . . .” and Bénédict de Saussure who, in 1789, invented the “cyanometer” to “measure the blue of the sky”. Here are jacarandas and International Klein Blue, and how, in Germany “to be blue – blau sein – means to be drunk”.

For all its peregrinations, Bluets is essentially clear and ordered. On every page, Nelson evaluates the journey of the book itself – from her extensive research and the funding applications she failed to secure (for trips to Chartres Cathedral, the lapis mines of Afghanistan), to the love affair which overshadowed the period of her life during which it was written. Nelson harvests as much meaning from the revelations of Goethe and Wittgenstein as from the passing comments of her therapist, her lost lover, her quadriplegic friend.

At the outset of Jane’s murder trial, the judge impressed upon the jury: “Questions are not evidence. Only answers are evidence.” For Nelson, questions, answers and evidence are indivisible, and she writes her way, symphonically, through them with shades of those from which she quotes, be it Gertrude Stein, John Berger, Sylvia Plath, WG Sebald.

“It does not really bother me that half the adults in the Western world also love blue, or that every dozen years or so someone feels compelled to write a book about it,” she writes. “I feel confident enough of the specificity and strength of my relation to it to share.”

By bouncing everything through the prism of her strong relations; by refusing to be intimidated by originality, Nelson is a true original.