Poetry about life’s ‘also-rans’ and the joy of nature

New collections by John O’Donnell, John F Deane and Eva Bourke have much to offer 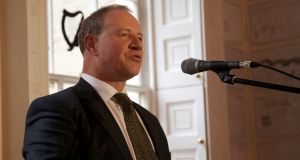 Sunlight: New and Selected Poems by John O’Donnell (Dedalus Press, 152pp) combines work from three previous collections with a selection of recent material. O’Donnell’s register throughout his work is relentlessly social: this is poetry rooted very firmly in a self that belongs, whether to a fellowship of writers, a Christian tradition, a school, a community, a family, even a golf club. There is a sympathy and compassion about O’Donnell’s vision that is winning: he is interested in other lives, and that generosity of outlook serves his poems well. Sports Day, for instance, deftly sets a familiar scene:

Suburban pastoral, this: off-white sky,
desultory screech of tannoy: medalled
winners in a swoon of bliss. Her new
partner in tow, the red-nailed mother glides
past paunchy dads consoling flat foot sons
who’ll later cheer them in the Father’s Race
as they lollop puff-cheeked towards the line…

There is an easy skill in the way O’Donnell manages to condense so much familiar life into a small space, but typically there is a sting in the tail, the sense that time, as Auden put it, “will say nothing but I told you so”: “For every boy/ breasting the tape there are, will be/ so many also-rans, who’ll prise open/ the future’s oyster-shell to find a world/ of sand instead of pearl.” O’Donnell’s work is frequently concerned with the “also-rans”, the loved others, the unnoticed, the lost; and the open, almost jaunty tone of many of these poems belies their serious intent, a vision of the world often tinged with tragedy, as in the powerful The Breaststroke among his newer poems, or Kola’s Shop from his 2002 collection, Some Other Country, which describes the plight of an African immigrant subject to racist attacks. One of the subtler pleasures of this book is the skill with which O’Donnell handles the technical aspects of his work, the adroit but unshowy way in which meter and phrasing are managed.

If O’Donnell’s is a populous literary imagination, John F Deane’s is much more a continuing dialogue between self and soul, in which the narrative voice strikes always an unabashedly high tone. Against the desiccated, hyper-ironised, and textually self-pleasuring tendency in contemporary verse, Deane’s Dear Pilgrims (Carcanet Press, 107pp) comes as something of a shock. It is serious, veering towards solemn, and given to abstract gestures and apostrophes. There is an abundant use of abstract nouns: “grief”, “joy”, “love”, “sorrow”; and the poems’ syntax is complex, as befits their generally elevated rhetoric: “Blackbird,/ on the backyard tree, is shivering his body /into startling song and a jet, high up and scarcely // audible, passes down along the stream towards Ithaca,/ Babylon, or Samarkand; you will return to yourself / let fall, repeatedly – into the well of quietness – // the name of the Source and Sustenance, and promise/ you will not flee from the love offered.”

These Jamesian sentence structures, with their subordinate clauses, their parenthetical asides, and their generous peppering of punctuation marks, are signifiers of the sacerdotal, as too are the innumerable compound words that function as physical manifestations of the intensity of vision Deane is attempting to communicate. While one never for a moment doubts this poetry’s sincerity, these formal devices, in particular the compounding of words, can verge on mannerism. Occasional compound forms, at moments of linguistic necessity, undoubtedly have greater impact than the diminishing returns of copious usage. They also, oddly, resemble the compound constructions utilised by translators of German philosophy (“out-into-the-outraged”?) and while one might argue that Deane is attempting, in his poetry, precisely to translate an elusive spiritual truth into fleshly language, I would counter that English words – especially English words – are capable of taking the strain without being continually mushed together in this way.

Deane’s work has always been distinguished by the wholeness of its vision, and the poems of Dear Pilgrims are no exception: the joy and compassion of his responses to the natural world are of a piece with his spiritual preoccupations, and gesture towards his poetic forebears, in particular Hopkins and Kavanagh. The ecological consciousness here demonstrates a profound sense of the sacredness of nature, something to which Deane’s poetry bears witness with unusual adherence and fervour. Among other pleasures in this volume, a very affecting version of the late 14th-century allegorical Pearl poem comprises its final section.

Seeing Yellow (Dedalus Press, 90pp) is Eva Bourke’s seventh collection of poetry, and within it the maturity and wide sympathy of this poet’s vision is everywhere in evidence. Bourke’s meticulous attention to detail is a frequently commented upon feature of her work, and as an approach to large or difficult subjects many poets know that it is one of the most valid: large generalisations are the death of the lyric, whereas seeing “a world in a grain of sand” is not simply a striking Blakean metaphor but also good, practical advice.

Bourke’s subjects are as varied as elegies for the deaths of close friends, reminiscences of her German childhood, intense responses to music and the lives of artists and composers, and laments for ecological despoliation. In all of these it is the vivid detail that hooks her interest, and that is carefully and deliberately built upon, so that in general the reader never feels hectored or preached at. There are one or two exceptions to this, most notably at the end of Pietà: “Can you forgive us, although we do know what we do?’ where the poet’s sense of outrage nudges the verse into sermonising, but for the most part this is a rare occurrence, and Bourke’s sensuous engagement with her subjects is one of the volume’s seductions, as in Wilderness:

Not a childhood dream, more a destiny –
my other life as a badger, otter, fox,
after I went down on all fours, a woodland demon, calloused
as Caliban, I crept from my den, earth-matted, snarling,
snuffling, to forage across the forest floor, springy
as a sponge with decay and moss; I loved its cold pliant effluvium.

The formal and tonal variety achieved by Bourke in this volume is also very pleasing; from the delicate haiku of Berlin Diary to the disjointed zaniness of Disintegrating Love Poem Found on a Coffee Table at the Berlin Poetry Festival. Warmly recommended.