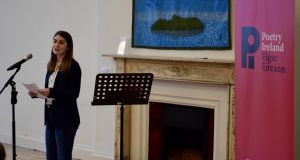 Sarah Brazil: These poems are proof that poetry is not elitist, but is by and for everyone

Rise Up & Repeal emerged out of the Repeal the Eighth referendum on May 25th, 2018, and its launch commemorates the first anniversary of the Yes vote. Much like the Yes campaign, this collection has only been possible through collaboration and generosity. All poets and other contributors have given their pieces freely. Likewise, co-editor Sarah Bernstein and Jo Walton and Sam Walton of Sad Press offered time and expertise without condition or payment.

All proceeds will go towards continuing the valiant work that abortion charities have done for many years, with Irish women having long been among the numbers in urgent need of financial assistance and emotional support.

The project began, of all places, on social media, where I witnessed an abundance of poetry posted online throughout the Repeal campaign. As a student and teacher of literature, I believe in its social and everyday importance: stories are part of what it means to be human.

These poems are proof that poetry is not elitist, but is by and for everyone. The poems compiled in this collection are from professional poets and people who did not consider themselves to be poets. In some instances, the poems were written as a spontaneous attempt to capture a feeling, to articulate something vital that ordinary language couldn’t. In some instances, contributors offered things other than poems, and we happily welcomed them.

The poems in this collection capture the years of struggle that led to the Yes vote in on the Eighth Amendment, which had made the life of a woman equivalent to a fertilised egg. They voice social disparities that have gone unspoken for centuries. They are of the utmost urgency, and put into poetic form the struggles of women and trans people for basic dignity and fundamental human rights. This collection is part of the increasing vocalisation of and fight against these and other struggles of inequality, such as sexual forms of violence, wage disparity and insufficient child care support.

This collection is a departure from the editorial and publishing teams’ daily work, and the contributors too have taken a leap of faith into the unknown. It is new ground in many senses. All have been convinced, however, of the value of what this collection can offer. It is an archive of a period in Irish and world history that is unlike any we have seen before. These poems give voice to the resistance that its writers make against the many forms of oppression they identify. They are rallying cries, they are experiences of anguish, hope, and love. They are political. They are calls to be compassionate, to care for our fellow citizens and their needs. To overcome the legacies of religious domination and abuse, and to move beyond patriarchal nationalism.

This collection is dedicated to the hundreds of thousands of women who have been affected by the Eighth Amendment. It is dedicated to Savita Halappanavar and her family, to Ann Lovett, and to all of the victims of cruel and regressive abortion laws, in Ireland and worldwide. Ní saoirse go saorise na mBan.

Spindle Pricked, the Fly Foraged for its Resin: A Fable from a Moonless Land
By Sara Crangle
Driving the old woman home with lurch and bump,
the fly does not inquire about her laundry – dirty or no –
but does stop off to sleep for a hundred years.

Awake at last, the fly hears the old woman’s twelfth
child – the one she raises for penance – partaking of toast
and tea. Thick air undulates against the window panes

and the fly rubs her eyes red trying to see the castle
in the brambles, but there is only a shred of nylon staked
out on elastic bands. Sinewy, the black bears circle,

and the fly, grown large with import, challenges one
to a duel. The bear’s gauntlet is made of slain sled dogs,
the very pups who dared howl at the midnight sun.

Dual? scoffs the bear, Sheridan’s lectures peeping from
her sleeved fawn waistcoat. First blood drawn, the fly aims to
delope, but the damn resin makes the fire stick. Just so

she rubs her jointed legs along her swollen abdomen, her
salivary glands set alight. With this softening, the body yields
at last to its chosen fate. The carrion is ready, the death

all life portends. The resin hardens, and heliotropic
trees bow low, know smiles. The old woman nods sagely,
having swallowed many flies, and the odd bear too.

thou
By Lucia Sellars
I stumbled upon myself. I gathered wholesomely into one solid being, like a clump of trees, grounded. Self-contained, self-aware. I tripped over my own reflection when he looked into my eyes. Solidness painted my/thou/soul in one thick brush stroke, across his landscape. I stumbled into my womb, suddenly with its own rhythm. Self-contained, self-aware.

When the seed was planted

I held myself against my flexed legs, containing thou skin and bones, and this breath, this breath of warmth. A human volcano, activated. The plate tectonics shifting-moving-flowing, in no order but in chaos. Initially my head was down, breathing into the crevices between my heart cage and the bend legs, as if de-guttering the channels of flow. Lastly the door of thou mouth opened towards the ceiling of the cube of the yellow of a reality. The vapour of heated shock melted upwards despite the grave gravity, a sound broke through from the tip of the alveoli, just because its distance, just because its depth, just because the strong impulse to let the sound of heated shock out of this inner world, of this inner displacement.

The situation, was. Yes, I approved first and Yes, I approved second. But to second was fearsome, no frisson involved but gutting, disjointing, deconstructing, turning the wheel of fortune backwards.

I stumbled upon my shadow, it looked whole and complete, after second happened. No holes, or gaps of see through light, no evidence of stitches of fate. We humans have several substances, not just soul and body, but temporal, timeless - substances.

I ate thou self, inside out, thoughts carved though brain lobes, feelings painted out reality, dendrites shooting pain towards sunset.

a blank new sheet. The harvest of seeds to be placed back in the ground. Fertility proved.

Peat contains humic acid, a natural surfactant,
which, when agitated by the rapids of a river, foams.

My skin is allergic to Fairy Liquid, so gentle for hands,
and I used to worry it made me look lazy.

Even if you cycle and use only paper bags,
the internet’s servers will still breathe out.

Full of asbestos, for fire resistance, the front door
opens and closes, like a poisoner’s eye.

Other women are telling me they have fallen
in love with their bodies. I cannot speak to mine.

Something is being farmed, and fed a number
of unspeakable remedies for its ills.

When I am poisoned, I want to rot, unembalmed,
until one day I form foam on dark rivers.

People will wonder about surfactants,
not about whether I am in touch with myself.