Paul Mason: The manifesto of a Marxist snowflake 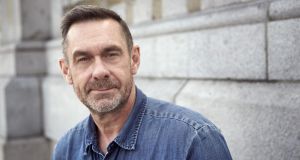 Paul Mason: ‘I want us to reclaim the word snowflake. Unique, fragile, beautiful: that describes human beings to me.’ Photograph: juergen-bauer.com

Paul Mason is a snowflake and proud of it. Not just that but a Marxist, antifascist snowflake.

“As a journalist I have always been trained to speak and write in clear, Anglo-Saxon, concrete words,” he declares in his broad Lancashire accent. “The allure of the right is its ability to do that at present. The left are constantly caveating every statement, constantly genuflecting to three or four different principles; they need to stop doing that.”

The former BBC Newsnight economics editor makes liberal use of the term “fascist” to describe his enemies, and he embraces labels that have been used as slurs against him. The word “snowflake”, he says, can be traced to the movie Fight Club, where the narrator, following a nihilistic script, dictates that each individual is “not the beautiful or unique snowflake” but worthless matter.

The son of a coal miner, the 59-year-old made his name as a broadcaster, first on the BBC and then on Channel 4 News, before relaunching himself as a freelance journalist, academic and activist. His 2015 book PostCapitalism gave historical context to the latest global financial crisis, forecasting a technological revolution that is set to sweep away old certainties. His new work, Clear Bright Future: A Radical Defence of the Human Being, builds on that analysis while lighting a path to salvation.

It’s an ambitious book, leaping from quantum physics to cybernetics to theology, and barely pausing for breath. Rarefied theorists are name-dropped as though we’ve all be up the same philosophical cul-de-sacs as this self-proclaimed ex-Trotskyist. (You know you’re spending too much time in left-wing academia if you think “the cult of Hannah Arendt” is a problem.)

The outcome is a gripping theory of everything, an attempt to explain the forces connecting Donald Trump’s election, Brexit, the HSE’s battles with the anti-vaccine brigade, and much more besides.

One of his jumping-off points is that “all economic systems are temporary”. Another is that we’re at a historical turning point – or “day zero”, to use his foreboding term – akin to the 1930s, when fascism was on the march.

“When I was working for Newsnight I used to envy the young, 30-year-old producers, Oxbridge graduates, because when neoliberalism was at its height it worked and they, as it were, lived in a world where all the problems had been solved,” he says.

“They used to shout at me across the office: ‘Paul, the middle way is best; your catastrophic predictions about capitalism have failed to come true.’ Now I pity them, because that entire generation has seen things pass by their screens every morning,” like the rise of the alt-right and Brexit, for which “they have no mental framework.

“I want this generation that grew up in a relatively peaceful, prosperous, successful neoliberalism to really understand the depths of crisis that they are now going through as the whole thing falls apart.”

Not just that, but he also wants them to resist the “mass folk religion of fatalism” that has gripped western civilisation, “where people think there is nothing they can do about stuff”. Postmodernism started the rot, with its credo that all truth is relative and, therefore, “humans don’t exist, and the word ‘self’ is just a social construct”.

Of all the airport-book people, Steven Pinker is not my number-one enemy. It’s Yuval Noah Harari

This loss of faith in humanity, he says, can be detected not only in politics but also in popular culture, from Game of Thrones, which revels in the depiction of humans as “the playthings of the gods”, to Ted Talks, with their “depressingly constant” focus on “how to take advantage of human weakness”.

“New optimists” like Steven Pinker also get a slating. “Pinker has become the refuge of the neoliberal, centrist ideology which says... it may be that liberal democracy is under threat but it’s quite resilient.” Those clinging to this view “are not looking closely enough to what actually happened in the 1930s”, Mason says.

Sure, health epidemics have become rarer, but anti-humanist forces are “quite capable of reintroducing measles on a large scale into developed societies”. This time the “lovely bespectacled men with white coats, like you probably had in the de Valera era, telling people to observe public-health messages”, will be outnumbered tenfold by people “on Breitbart, YouTube, Twitter saying, ‘This is bullshit. This is the deep state trying to kill your children’.”

However, he says, “Of all the airport-book people, Pinker is not my number-one enemy. It’s Yuval Noah Harari, with his claim that we are ‘already algorithms’. If there is a folk religion of fatalism he has become the pope of it.”

Where does Karl Marx fit into this? “Real Marxism is full of answers about what to do in an age of climate chaos, machine control and the resurgence of fascism and anti-humanism, because, at root, Marxism is a doctrine of individual liberation.”

Specifically, Marxism gives a meaning to human life – our “point” is to be free and to see our fellow humans enjoy freedom. And it offers a vision of the good life – “to hunt in the morning, fish in the afternoon, rear cattle in the evening, criticise after dinner” (or at least that was the vision in 1846).

But are there not, surely, other philosophies, both religious and secular, that can provide meaning for humankind, or a vision of the good life?

“There are of course alliances,” Mason replies. “Like the English Marxist EP Thompson, I would say for somebody like me – a humanist Marxist – there is always the fallback line of religion and liberalism.” However, “I am an atheist” and “all the secular isms are in crisis”.

I will walk on to some university campus and say, ‘Hi, I’m Paul Mason. I believe there is such a thing called human nature,’ and students will gasp as if I’d said, ‘Several thousand angels can dance on the end of a pin’

That’s not to say he agrees with Marx on everything. Mason advocates a rekindling of moral philosophy, particularly virtue ethics – which he admits is “not widely in use today… apart from among Catholics”.

“One of my arguments in the book is that businesses and governments have to become intelligent clients for moral philosophy, and not simply for an off-the-peg set of ethics designed for closed tasks.”

He adds: “Ireland is like the European capital of virtue ethics, because apart from Poland it is one of the strongest theological Catholic countries in the world… but the Anglo-Saxon world isn’t so exposed to them; it is very enamoured of utilitarianism.”

Could this be good news for Ireland? Might we see a new divinity wing opening soon at Maynooth to meet Silicon Valley’s demand for moral philosophers? Don’t count on it. Mason wryly observes that Google shut down its only artificial-intelligence ethics board earlier this month.

As for his own job prospects, Mason has “informally” advised the UK’s Labour Party front bench on policy. Would he accept an offer from Jeremy Corbyn in 10 Downing Street? “You never say never to anything,” but, “I always demanded the right to retain a critical distance.” (Indeed, he has been recently critical of the party leadership for failing to get behind a second Brexit referendum.)

Identifying scope for greater co-operation with conservatives, Mason issues them this invitation: “We, the left, want to be your allies in defending democracy and the rule of law. Even though you hate our social programme, let’s at least find unity on that.”

As for the left, he says, its infatuation with postmodernism must end. “The first thing postmodernism did was introduce a respectable irrationalism into academic thought – to the point where I am certain in the next few weeks I will walk on to some university campus and say, ‘Hi, I’m Paul Mason. I believe there is such a thing called human nature,’ and students will gasp as if I’d said, ‘Several thousand angels can dance on the end of a pin.’

“They regard the idea of human nature as a theological construct, and what’s the practical outcome? When you see some kid who has been blown to smithereens and their mother comes limping out of a shell hole in Syria and somebody tweets: ‘This is just a crisis actor.’ The preparation for that was done by postmodernism, not just the right.”