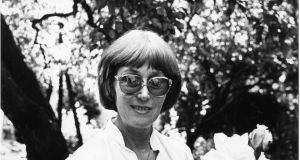 The novelist and short story writer Val Mulkerns has died. She was 93.

Her first novel, A Time Outworn, was published in 1951 to critical acclaim, and was followed by three more novels, three collections of short stories, two children’s books and a memoir.

Mulkerns was one of the earliest members of the association of artists, Aosdána, after its establishment in 1981 and was joint winner of the AIB Prize for Literature in 1984.

She worked as associate editor and theatre critic with The Bell, a literary magazine founded by Seán Ó Faoláin, and also wrote columns for The Evening Press and contributed to The Irish Times. She was a regular contributor to RTÉ Radio’s Sunday Miscellany show.

Mulkerns, who lived in Dalkey in Dublin, was married to Maurice Kennedy, who died in 1992, and had three children – Maev, a journalist with the Guardian, Conor, director of the Javelin advertising agency, and Myles, a writer and care-worker .

Mulkerns also edited a posthumous collection of her husband’s work, The Way to Vladivostok, which was published in 2000.