Judging Redmond & Carson review: It could all have been so different 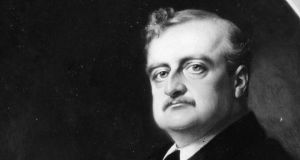 Jackson’s book shows that John Redmond and Carson and Redmond were friends. Image from portrait by artist Henry Jones Thaddeus. Courtesy of the National Gallery of Ireland

Jackson describes Redmond as “patient, careful, consensual – but occasionally capable of necessary anger” who held together, from a position of weakness, a national enterprise (Home Rule) which he brought to “the cusp of victory” in 1914.

He says Carson, in contrast, was impatient, and unhappy when away from the law courts. His histrionic qualities, so successful in cross-examination, made him a bad team player. He worked exceptionally well when he had a clear goal, but coped badly with the challenges of sustained administration, a field to which Redmond would have been more suited.

Carson was a brilliant advocate but a moderately unsuccessful minister. Redmond had the qualities to be a good prime minister but never got the chance

Carson was a brilliant advocate but a moderately unsuccessful minister. Redmond, in contrast, had the qualities to be a good prime minister but never got the chance.

Dermot Meleady, the author of a comprehensive two-volume life of Redmond, has now also edited Redmond’s vast correspondence. These letters illustrate the huge practical difficulties Redmond faced in holding together and servicing the numerous constituencies he had to mobilise to achieve Home Rule.

To exercise influence in Westminster, he had to spend a lot of his life in London. To mobilise British Liberal opinion behind Home Rule, he had to address meetings all over the rest of Britain. To bring Irish public opinion along in the compromises he needed to achieve Home Rule by constitutional methods, he had to spend a lot of time in Ireland. To raise funds and exert pressure on the UK government, he had to travel often to the United States and Australia.

All this took a toll on his health, and contributed to his death at the relatively young age of 61.

Travel and communications were much more difficult then, so a lot of Redmond’s negotiations were done by letter. The correspondence shows how Redmond was instrumental in seeking to avoid, and eventually in healing, the damaging split between Parnellites and anti-Parnellites.

In 1890, Redmond stood by Parnell, a stance that Carson admired. But he later led a united party, the majority of whom had been opponents of Parnell.

Redmond’s career is sometimes presented as a tragic and unlucky failure. This is not so. He successfully used his pivotal votes in the House of Commons to abolish the parliamentary veto of the House of Lords, a major constitutional achievement. Redmond was able to succeed in this because he had won the trust of his opponents as well as his friends, and because he used his party’s vote skilfully.

On that basis, he then succeeded, on September 18th, 1914, in having parliament enact Home Rule for Ireland, and in having it signed into law by the king. It is important to remember that previous leaders of Irish nationalism, O Connell, Butt and Parnell, had not succeeded in doing any of this. The enactment of Home Rule meant that the UK parliament had already consented to the principle of Irish legislative independence, well before the 1916 Rising and the 1918 election. By 1915, all parties in Westminster, including the Conservatives, had accepted that legislative independence for at least 26 of the counties of Ireland was both inevitable and necessary.

All this was done without taking anyone’s life.

Home Rule was not brought into effect in 1914 because of the distractions caused a month earlier by the outbreak of the first World War. Initially, this was not controversial.

But the possible exclusion from Home Rule, either “temporarily”, “provisionally”, “indefinitely” or “permanently”, of four, or six, Ulster counties was also left over and was controversial.

In the period from 1885 to 1910, Redmond and his party transformed the system of agricultural land holding in Ireland and ended landlordism. This created a rural middle class, which underpinned Irish democracy in the first half of the 20th century, when many comparable European countries, where a landlord system had persisted, succumbed to authoritarianism.

Carson represented Trinity College in Westminster, and Trinity was a major landowner which lost out under tenant right and land purchase schemes. So he and most unionist MPs opposed land reform, which led to frictions with some unionist tenant farmer interests in Ulster.

Redmond and the Irish Party also helped establish the National University of Ireland, enact old age pensions and national insurance, and, through the Labourers Acts, make provision for the first ever programme of public housing in Ireland.

During most of the 19th century, Ireland was “overtaxed”, in the sense that more was collected in taxes in Ireland than was spent by government here. Old age pensions and national insurance changed that, because Ireland benefited from them proportionately more than Britain did. Indeed Redmond expressed concern that additional insurance entitlements, proposed by Lloyd George, could not be afforded by an Irish Home Rule government, reliant on the limited Irish tax base. The Free State inherited this problem.

One of the big controversies surrounding Home Rule was about whether the Home Rule government would have power to set and collect customs duties, as well as other taxes.

Industrialised north-east Ulster argued strongly that a Home Rule government in Dublin should not be allowed to leave the UK customs union, because it might use customs tariff powers to favour other parts of Ireland, to Belfast’s disadvantage.

Alvin Jackson delves into the character of each man and allows the reader to get to know them as people, rather than as the political icons they became

Redmond wanted to avoid partition and was prepared to cede ground on the customs issue. Other nationalists took a harder line and they got their way. The Treaty of 1921 took the 26 counties out of the UK customs union, but at a high price in death and destruction, and with limited immediate economic benefits.

Jackson’s book shows that Carson and Redmond were friends.

Carson attended Redmond’s funeral Mass. They had been colleagues at the Bar, although Carson had the greater success in that arena. They were on opposite sides of most political issues. But, in June 1916, they reached a crucial agreement.

This agreement, if implemented, could have peacefully resolved the Irish question. It involved the immediate implementation in 1916 of Home Rule, but with the six counties excluded for the duration of the war, when an imperial conference would be called to consider the matter.

Carson persuaded the Ulster Unionist Council to accept this formula, although it meant abandoning Unionists in Cavan, Donegal and Fermanagh. Even more remarkably, Joe Devlin and Redmond persuaded an Ulster Nationalist Convention to accept it by 475 votes to 265, despite the opposition of the Catholic bishops.

But the UK government was persuaded not to go ahead with it by Southern Unionist interests represented by Walter Long MP and by Lords Midleton and Lansdowne. This was a tragedy, and the reasons for it deserve to be explored by historians, as do the reasons for the stance of the Catholic bishops. This failure, and the subsequent doomed attempts to introduce conscription, undermined constitutionalism in Irish public opinion, and opened the door to the wars of 1919 to 1923.

These are two excellent books, which help us to understand critical moments in Irish history. They also humanise their subjects.

Alvin Jackson writes with verve and is confident in his judgements. He delves into the character of each man and allows the reader to get to know them as people, rather than as the political icons they became. Meleady’s book deepens this in Redmond’s case. Redmond’s letters give an insight into the intense pressures under which he lived, his bereavements, his physical isolation and the progressive toll taken upon him by illness.

John Bruton is a former taoiseach and leader of Fine Gael