Week 10: Julie Parsons on her favourite books. This week, a guidebook to hell 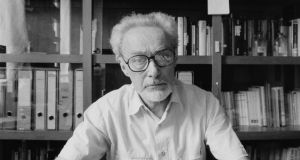 Primo Levi: the writer was 24 when he was deported from Turin, via an Italian internment camp, to Auschwitz, in the winter of 1943-44. Photograph: Gianni Giansanti/Gamma-Rapho via Getty

It’s a guidebook to hell:

“Consider if this is a man
Who works in the mud
Who does not know peace
Who fights for a scrap of bread
Who dies because of a yes or a no.”

Primo Levi was 24 when he was deported from Turin, via an Italian internment camp, to Auschwitz, in the winter of 1943-44. “We know that of our convoy no more than ninety-six men and twenty-nine women entered the respective camps of Monowitz-Buna and Birkenau, and that of all the others, more than five hundred in number, not one was living two days later.”

Levi, who had belonged to the anti-fascist resistance in Italy, learned the rules of the camp quickly. His rudimentary knowledge of German, acquired when he was studying to be a chemist, helped save his life. He could understand and respond to the Nazi guards’ shouted orders. A failure to respond was a death sentence. He learned other vital lessons: “everything is useful: the wire to tie up our shoes, the rags to wrap around our feet, waste paper to (illegally) pad out our jacket against the cold. We have learnt, on the other hand, that everything can be stolen, in fact is automatically stolen as soon as attention is relaxed.” He learned how to barter and bargain, whom to befriend and whom to avoid, how to get a ladleful of soup from the bottom of the vat where it was thicker, rather than from the watery top. On such small things is survival dependent.

And somehow he learned to hold on to his sense of self. He was sent to the chemistry lab. He was warm, dry, comparatively safe. But he came into contact with German girls, secretaries. He saw himself as they saw him. “We are ridiculous and repugnant. We have a swollen and yellow face, marked . . . by bruises and numbed sores. Our clothes are incredibly dirty, stained by mud, grease and blood. We are full of fleas, and we often scratch ourselves shamelessly.”

Levi survived. He bore witness. He gave us the chance to see the world through his eyes, to smell through his nose, to feel through his fingers, to taste through his tongue. To fear like he feared. To ask ourselves: who are we?