Migration and the Making of Ireland: a fresh and fascinating read 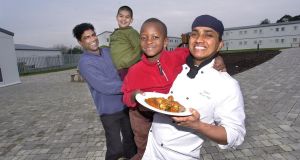 Book Title:
Migration and the Making of Ireland

The teaching of history in Irish schools used to be a simple, uncontested matter. The “native” Irish, variously referred to as Celts, Gaels and other only partially accurate labels, suffered endless invasions by various foreigners over eight or more centuries. Sometimes the solution was to absorb them – the Normans became “more Irish than the Irish themselves”. Over time, this unrelenting struggle focused on invasions from the neighbouring island. A series of catastrophes, from the Flight of the Earls in 1607 to the Great Famine and beyond, was accompanied by forced departure and exile from the native land on a massive scale. In a thousand songs and stories, the migrant looked back in sorrow at the lost paradise, vowing to return or at least to help free it from foreign subjugation.

The end of history in those primary school history books was the 1916 Rising, followed by the Treaty of 1921 and independence, of a sort, for part of the country. The Civil War and its aftermath were not mentioned. The reality, of course, was more nuanced and more complex.

Ireland and its populations were always implicated in a variety of ways in movements of people, of ideas, of culture, goods and political power between these islands and beyond. The Viking invasions were part of a wider European phenomenon. The Irish themselves invaded and colonised what is now western Scotland, bringing their language with them, and also sent missionaries across the continent. In more recent centuries the Irish were not simply a scattered people, leaving against their will in response to conflict and famine, but also sent soldiers and others to Europe as well as participating in the building of European empires elsewhere, from the Spanish to the British. The millions who crossed the Atlantic were not unique, but part of a massive European wave from the 18th century onwards. In modern times emigration did not stop with independence, but returned in wave after wave, most recently after the crash of 2008. Many who left felt there was no place for them in the new state. They included some Protestants but also generations of the less well-off who left with little as well as others who were, for one reason or another, seen as socially undesirable. The Government was in no hurry to see them return.

What of those who came here? Again, the picture is nuanced. Parts of Ireland have now been English speaking for several centuries. Settlers included English, Welsh and Scots, but also Palatines from Germany and Huguenots from France. Later, Jewish migrants from Russia and Eastern Europe were followed by people from many lands, including post second World War Italians, Chinese, Hungarians and Indians, down to the now more diverse country that includes Syrian, Nigerian, Filipino, central and western European, Brazilian and many other nationalities. Today’s largest minority is Polish. The experience of many migrants and refugees here has ultimately been positive.

The modern Irish nation is always porous, in process, always becoming but never complete. There is a constant dialogue and interplay, as well as occasional conflict, between indigenous and incoming individuals and communities (including returnees), between identities, cultures and values, between core and shifting peripheries here and abroad.

Prof Bryan Fanning’s deep knowledge and experience of researching and publishing on migration and Ireland makes him an eminently suitable author to tackle this complex topic on such a scale. His new book tackles inward and outward migration over a millennium, showing that it is one of the defining factors in the construction of Ireland both as island nation and global diaspora.

The book is aimed at a general audience but will also be invaluable for students. It adopts a chronological sequence, from earlier invasions and plantations to later groups of incomers – Palatines, Huguenots, Jews, refugees, Africans, Poles and Muslims. Two chapters concentrate on emigration, up to independence and after.

It is impossible in one book to cover every aspect of this topic. There is little here, for instance, about the Irish in the British Empire or in South America. Every immigrant group in Ireland does not receive the same degree of attention either, or the book would simply become a catalogue. But discussion of different groups and themes is constantly interwoven and cross-referenced with admirable energy. The establishment of the Jewish community and places of worship in Dublin and elsewhere, for example, has many parallels in the recent developments in Ireland’s Muslim population.

Fanning’s discussion of the treatment of certain groups of refugees in Ireland - Jews, Hungarians, Chileans, Vietnamese – is unflattering. He highlights the ungenerous response of the Irish State to the predicament of Jews in Germany and elsewhere and considers the impact of the anti-Semitic views of civil servants such as Charles Bewley and Peter Berry. The Hungarians fleeing repression in 1956 were detained illegally in the Knockalisheen camp and prevented from seeking work. The State was relieved to see the majority leave for Canada.

Fanning correctly describes the approach followed in the reception and integration of Kosovar refugees in the late 1990s as a model of its kind. The efforts made by the Refugee Agency were not only enlightened but comprehensive, providing language and support programmes and even study visits to Kosovo after hostilities ended for those contemplating return. A pity then, as Fanning points out, that the Department of Justice closed the Refugee Agency in 2000 and replaced it with the iniquitous Direct Provision system.

Fanning is equally wide-ranging on Irish emigration and settlement patterns and notably on the role of religion in the flows of Irish emigrants to North America. He reminds us of the fact, still ignored by many here, that there are more Irish Americans of Protestant descent than Catholic, and also comments, for instance, on the role of Irish Quakers in the development of Pennsylvania. He does not shy away either from considering the dark side of Irish racism in the United States.

Any consideration of today’s generation of emigrants must necessarily be framed in terms of the contrast between past and present. Compared to today’s desperate refugees, victimhood is no longer a defining feature of emigration for the Irish. More generally, Fanning notes that “compared to immigrants who came to Ireland, recent Irish emigrants have faced relatively few obstacles”.

This book is particularly to be welcomed at a time when European ethno-nationalism of the ugliest kind is making a return across the continent in such countries as Russia, Hungary, France and even England. Fanning’s book is a fresh and fascinating survey of nation-making, not as the affirmation of some kind of blood-right, but as ongoing conversation, occasional conflict, adaptation and change.