Asymmetry review: A novel that puts a refreshing trust in its readers

Lisa Halliday’s debut novel has three discrete parts, and the reward is in seeing how they connect 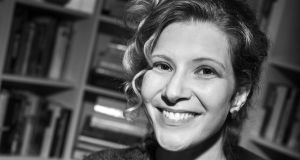 Lisa Halliday: a novel of unusual poise, with an unusual structure

In the final section of Lisa Halliday’s tripartite debut novel, Asymmetry, the aged novelist Ezra Blazer is being featured on Desert Island Discs. One of the novel’s three main characters, Blazer chooses Isaac Albéniz’s piano suite Iberia as one of his selections, “because each of the pieces builds on the last, they’re discrete and yet all the richer for being heard together, and you just ache with the mounting intensity of it”. The asymmetries of Halliday’s assured debut, its daring structure placing three distinct sections obliquely alongside each other, might be similarly described, though the experience of Asymmetry is often one of withheld rather than released intensity.

The novel’s first part, “Folly”, traces the uncomfortable, imbalanced relationship between Alice Dodge, an editorial assistant in a major New York publishing firm, and successful older writer Blazer, a character who has garnered much attention in reactions to Halliday’s novel for his close resemblance to Philip Roth. Halliday herself, in fact, has acknowledged Roth’s influence on Blazer in an interview with the New York Times. The degree to which “Folly” may or may not intersect with Halliday’s own life, however, is immaterial, especially since Asymmetry is largely a novel about fiction, about imagination, and about the possibilities and limits of empathy.

In “Folly”, Alice is quiet, apologetic, subject to the gaslighting and power-plays of her older lover, who is by turns manipulative and vulnerable. Only in a few moments do we learn that she herself wants to be a writer, that this relationship is a sort of smothering apprenticeship (at times, Alice’s voice is almost suffocated by passages from books Ezra has recommended to her), though this is in fact key to the novel. At one point, Ezra tells Alice to avoid world affairs in her writing, and to draw instead on her personal life, so that she begins “to consider really rather seriously whether a former choirgirl from Massachusetts might be capable of conjuring the consciousness of a Muslim man”.

The second part of Asymmetry, “Madness”, is Halliday’s attempt to do just that, and it is a testament to the great intelligence of this novel, and to Halliday’s trust in the reader, that she allows us to connect the parts for ourselves, placing each in oblique relation to the other, so that the experience of reading her work is one of feeling the mind gradually light up, recalling echoes, returning signals, mapping its own workings, creating a sort of metafiction of its own.

“Madness”, which follows an Iraqi-American man, Amar Ala Jaafari, who is being detained at Heathrow border control, is the novel’s most accomplished section: its prose is spare but unsparing, especially in the matter-of-fact violence it relates. It turns what might have seemed like self-indulgence in “Folly” into a retrospective meditation on empathy and imagination, adding an urgency and political clout to the asymmetries of the title – we are no longer just looking at the (substantial) imbalances of love and money, age and gender; now, these are expanded into global asymmetries of power in terms of race, violence, and privilege.

“Ezra Blazer’s Desert Island Discs”, the final part of the novel, acts as a sort of coda (in fact, it offers a blink-and-you’ll-miss-it clue to Asymmetry’s entire structure). Here, Blazer returns to his characteristic blend of wisdom and patronising arrogance (“I consider my girlfriends my children”), flirting (and eventually leering after) the female interviewer, but never attempting to conclude the novel, the loose ends of which are left tantalisingly untied.

This is a masterfully written book “about the extent to which we’re able to penetrate the looking-glass and imagine a life, indeed a consciousness, that goes some way to reduce the blind spots in our own”. It is difficult to summarise without resorting to dichotomies (it offers one thing, then quickly reverses or questions it), and becomes more fascinating after you’ve finished reading.

In Wallace Stevens’s poem Thirteen Ways of Looking at a Blackbird, the poet writes: “I do not know which to prefer, / The beauty of inflections / Or the beauty of innuendoes, / The blackbird whistling / Or just after.” Halliday’s novel gives us the joy of both inflections and innuendos, the subtlety of its prose being revived as we read by the sounding-off of echoes and memories in the mind. This is a novel of unusual poise, with an unusual structure, but more than this, it places unusual trust in us as readers, asking us to consider our own imagination, our culpability, and ultimately urging us to experiment with the reaches of our empathy.