Travelling in a Strange Land review: Grief and redemption in the bleak midwinter 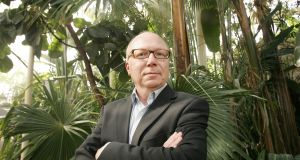 The novels and short stories of David Park, set primarily in Belfast, where he grew up, and Co Down, where he now lives, are characterised by a clarity of purpose, a nonpreachy morality and an emphasis on what he has referred to as a ‘communal healing ... [which is] not to be found in truth commissions or in institutions but is simply to be found in the renewed rhythms of life.’

In Travelling in a Strange Land, Park’s 11th published work, the significance of healing, communal or otherwise, is further explored in a deeply felt, brief (at under 200 pages) novel of personal tragedy and failure. Park uses a whited-out, almost impregnable midwinter landscape to explore the physical and emotional journey of Tom, a middle-aged father of three who is setting out from the family home near Belfast to collect his son Luke from university in Sunderland and bring him home for Christmas. The airports are closed, Luke is alone with suspected flu in his student accommodation, and the only option is the car ferry.

Snow is, of course, a hugely useful symbol in literature – Orhan Pamuk’s novel of that name, set in an Anatolian city cut off from the rest of the country during a three-day snowstorm laid bare the complexity of Turkey’s divided soul; closer to home there’s Joyce’s benchmark snowfest, The Dead; and Park’s own The Big Snow; interlinked stories set against the backdrop of an Ulster shivering under the blizzard of 1963.

Travelling in a Strange Land is in some ways an update of The Big Snow; its contemporary post-Troubles setting peopled with ghosts of both the metaphorical or more tangible variety, of which the most obvious is Tom himself. A jobbing photographer, “Not exactly Ansel Adams. Devoid of all mystery”, Tom uses the camera as a shield to reflect life back at himself without ever getting too close to it. It has served him well up to a certain point: a long, outwardly happy marriage to the selfless Lorna, two sons and the unexpected boon of a much younger daughter, Lilly. Not for him the hard, often degrading graft of his father, a manual worker who later died of Parkinson’s. Yet Tom is prone to depression and doubt, and his mostly solitary, highly anxious car journey is a pilgrimage, an opportunity for reflection, and as becomes increasingly apparent, atonement.

As with all such missions, there are digressions and interruptions, unforeseen meetings made strange by the uniqueness of and diversions caused by the weather: a young woman on the ferry “with eyes the same grey-green colour as the sea”; a stoical elderly pensioner to whom Tom gives a lift to her remote cottage; another motorist whom Tom helps, after coming across her by chance when her car veers off the icy road. Otherwise Tom’s alone, save for the voice of the satnav and the intermittence of Lorna’s, Lilly’s and Luke’s mobile phone calls.

Except there is another presence with him, a figure who appears to simultaneously exist outside time and be composed of its fragments: Tom’s elder son, Daniel, the outcast of the family, a “reckless” young man with a “poor grasp of consequences” ; a talented art college drop-out whose abject fate we learn of by slow, painful degrees.

Grief’s variegations can be muffled, even muted, much as one’s immediate surroundings are altered by heavy snowfall. The guarded anguish surfacing in Park’s novel evokes a wider historical sense of generalised trauma, even as Tom speaks angrily and specifically of Daniel, “a son so full of shit that it leaches to the surface of his skin and finds expression in pitted blemishes like some piece of bruised fruit”, then later, more wistfully, of “the half-remembered stranger” whose absence is never discussed, to be averted in the same way the eyes sharply turn from the intense glare of sun on a frozen pond. There is no false piety in this sometimes desperate, always measured novel, but a compassionately observed, manifestly flawed redemption, akin to what Emily Dickinson referred to as “the Hour of Lead”: a process of mourning that results in a final relinquishing, and an eventual thaw.