New Philip Pullman novel The Secret Commonwealth due in October 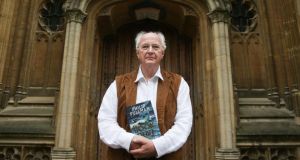 Philip Pullman: his next book, The Secret Commonwealth, is set seven years after the end of The Amber Spyglass, the concluding part of the His Dark Materials trilogy. Photograph: Daniel Leal-Olivas/AFP/Getty

Seven years after readers last saw Lyra Silvertongue, sitting on a bench in Oxford’s Botanic Garden, Philip Pullman’s most beloved heroine is set to return as an adult this autumn in the second volume of his trilogy The Book of Dust.

Pullman announced on Wednesday that The Secret Commonwealth would be published in October, just ahead of BBC One’s television adaptation of his bestselling His Dark Materials trilogy, starring Dafne Keen as the child Lyra, Ruth Wilson as the sinister Mrs Coulter and James McAvoy as Lord Asriel.

The first Book of Dust novel, La Belle Sauvage, introduces Lyra as a baby, as a huge flood hits Oxford and the 11-year-old Malcolm Polstead becomes her protector. The Secret Commonwealth is set 20 years after those events, and seven years after the end of The Amber Spyglass, the concluding volume in the His Dark Materials trilogy.

It was enthralling to remember how powerfully our minds and opinions can be turned by reading a particular book at the right time. Lyra, as a student, is finding that out

Lyra is no longer a child, and life, warned Pullman, is not easy for this grown-up version of a character readers first met as an 11-year-old running wild in the English university city with her daemon Pantalaimon. Now a student, she will travel across Europe and into Asia as she searches for a town said to be haunted by daemons.

“Things have been biding their time, waiting for the right moment to reveal their consequences for Lyra Silvertongue,” the novelist said. “The Secret Commonwealth tells the continuing story of the impact on Lyra’s life of the search for, and the fear of, Dust. I found it intriguing and deeply exciting to discover how great events can turn on a little moment, and how revenge can be nurtured and fed and watered till it grows beyond control.”

An early extract shows conflict between Lyra and Pan, as the daemon criticises her for being pessimistic. “You used to be optimistic. You used to think that whatever we did would turn out well. Even after we came back from the north, you used to think that. Now you’re cautious, you’re anxious,” he tells her, as the pair deliberate what to do after witnessing a murder. Lyra “knew he was right, but it wasn’t right that he should speak to her accusingly, as if it was something to blame her for. ‘I used to be young,’ was all she could find to say,” writes Pullman.

“It was enthralling for me to remember how powerfully and passionately our minds and opinions can be turned by reading a particular book at the right time. Lyra, as a student, is finding that out. She is also discovering a new and difficult aspect to her relationship with Pantalaimon, and other things about daemons that she never suspected,” the novelist said.

But, really, Pullman continued, “those things are background”. “At the heart of the book are Lyra, the young woman we saw first as a girl of 12 and then as a baby, and Malcolm, whose life as a boy became involved with hers and who now finds their lives helplessly entangled again; and how some emotions can last a lifetime, and others change beyond recognition,” he said. “It’s the story of some people we know, and others we’ll meet for the first time. Their journey is going to take them far from their homeland towards a mysterious desert in central Asia, where they hope to find, at last, the secret of Dust.”

The Secret Commonwealth will be published by David Fickling Books in association with Penguin Random House UK on October 3rd.

Francesca Dow of Penguin Random House Children’s compared the book to the dystopian classics The Handmaid’s Tale and Never Let Me Go, saying it “shows us a darker parallel world whose troubles echo our own”. Pullman has previously quipped that The Book of Dust should be called His Darker Materials.

Extract from The Secret Commonwealth

“It used to be you who was impulsive,” said Pan, “and me who kept holding you back. We’re different now.”

She nodded. “Well, you know, things change… This isn’t just shoplifting. This is murder.”

“And maybe by doing this we’d be helping the murderer get away with it. By interfering with the investigation. That can’t be right.”

“That’s another thing,” he said.

She knew he was right, but it wasn’t right that he should speak to her accusingly, as if it was something to blame her for.

“I used to be young,” was all she could find to say.

He made no response.

They didn’t speak again till they reached the station. Then she said, “Pan, come here,” and he leapt up at once into her hands. She put him on her shoulder and said quietly, “You’re going to have to look out behind. Someone might be watching.” – Guardian