On the Genealogy of Morals (1887) by Friedrich Nietzsche: A diabolical deal 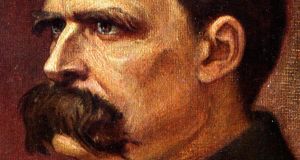 One way to think of On the Genealogy of Morals is as among the greatest horror novels ever written. Ostensibly a work of philosophical anthropology, its content is so speculative and shocking that it has more in common with Lovecraft than with Kant.

The nature of Nietzsche’s mission was staggering: cosmic regime change, a blasting of humankind out of its Judeo-Christian echo chamber. God was dead, but the assumptions embedded in religious belief ran deep into the foundations of our civilisation, beneath the cheery parades of supposed atheism. Every theistic prejudice would eventually be uprooted, even if it took millennia, and thus we are now “part of a higher history than all history hitherto”. As Nietzsche remarked with breathtaking offhandedness in one of his letters, the first thing that will have to go is our entire European morality.

Genealogy is Nietzsche’s bid to trigger moral Armageddon. In three seditious essays, he argues that everything Christians believe to be good was born of seething ressentiment, the hatred of slaves for the sanguinity of their noble Roman masters. Christianity was a conspiracy of the weak, ugly and vengeful to effect a “slave revolution in morals” and cast shame on everything that had priorly been called good: lust, power, riches, freedom of spirit. Christian “love” was spawned from infinite hate, a spitefulness that forced the world to assume its own mangled image. Life became poisoned by guilt. Moreover, the democrats and socialists who agitate for the equality of all human beings are Christians in drag: they boast of having done away with God but assume they can somehow hang on to the morality His reign ensured.

Nietzsche still reads like the most urgent headline news. He knew full well that one day great cataclysms would be associated with his name. From Genealogy onward, the battle lines were drawn. Nietzsche committed himself to total war, accepted his adversarial destiny, opened negotiations with Evil. This book could only have been written by the anti-Christ.