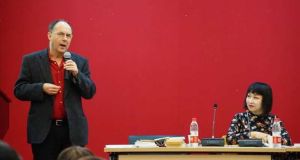 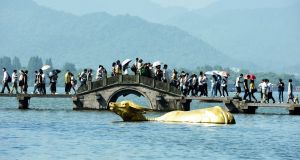 WB Yeats, though haunted all his life by ideas of China and Japan, never actually went there. Not long ago, in the old and beautiful Peking University, I had the strange experience of reading from and talking about Lapis Lazuli, his late, great meditation on history, where Chinese sages stare out from a mountainside at the ever-changing human spectacle, seeing in it neither tragedy nor comedy, but the passing of time.

“There, on the mountain and the sky

On all the tragic scene they stare.

One asks for mournful melodies;

Their eyes, mid many wrinkles, their eyes,

Their ancient glittering eyes, are gay.”

The Xinchan mountains, visible in the distance, were real. To the beautiful young students, some of the brightest in China, sitting there listening, history and philosophy were all too real, ever more oppressively so, and to my hosts Prof Tan and the poet Huiyi Bao. Yeats, that vague figure in western literary consciousness, had crystallised a moment in their own. Even as the globe shrank, consciousness itself was expanding.

Literary travel, like literary life itself, is essentially an afterlife. The real stuff has happened long ago, or it never will

The mountains, where Bao and I would go next day, already had October snow on their peaks. I spoke of another poet, St-John Perse, the French diplomat and one-time friend of Yeats, who had written, a hundred years ago, his epic Anabasis, a meditation on the rise and fall of peoples, in a monastery somewhere in those mountains, as the first World War ended. This too, they were aware of. Everything breathed serendipity, connectedness, a world psyche coming together, as another Peking resident Pierre Teilhard de Chardin had once written, before Earth itself was finally abandoned.

But the next day was still Earth, still autumn. Traffic swarmed to the Eight Great Sights while our car took a slip road into the foothills. A raucous country market, the silence of tea ceremony and gingko tree inside the walls of a 1,000-year-old monastery. That day we were to wander, Bao and I, in the flaming hush of autumn forests, in search of the lost temple Anabasis had been written in. But the ruins had long since vanished. By afternoon, as the deep blue sky grew colder, the million still and moving lights of Beijing came on in the distance, but the myth of Anabasis, of still and wandering civilisations, seemed to grow more not less real as the world in front of us grew later.

“. . . laws enacted upon other shores, alliances by marriage in the midst of dissolute peoples, great territories auctioned away beneath the inflation of the Sun . . .”

I had lived long ago in the Far East. Coming back decades later, at the invitation of Bao and Fudan University in Shanghai, felt like a last look around before death.

Unmet at the airport, luggage lost at the other end of the Earth, the internet jammed, the trash-filled canal outside the window of a government hotel – so this, one felt, was what death must be. For all its lostness though, it was not the first loneliness of adulthood, but a mopping-up of moods and places left lying about from earlier, wilder times. Literary travel, like literary life itself, is essentially an afterlife. The real stuff has happened long ago, or it never will.

All that teeming, swarming life. The whisper of a million bicycle tyres on the asphalt street, the jingling of little bells after dark. The pigtailed bobby-soxed girls on motorcycles, the tiny businesses on the sidewalks and the lights, the fiercely concentrating faces, in the language schools through the heavy-scented trees. Androgynous boys and girls in beauty parlours, grooming each other. Cooking fumes, the sizzle of great woks. The halfwild cats that lived, in their hundreds, on campus, kept alive by the students. The slung hammocks and mosquito nets in the lit, crowded dormitories after dark. If I had a quarrel it was not with China but with its non-representation by W H Auden in his Chinese sonnets, all gigantism and moralising abstraction, with the human reality lost in its shadow. I swore then and there I would try to write my own Chinese sonnets, with the life of the place inside them.

“Slowly, slowly, a black swan glides towards me

Through the green shallows of uneasy conscience

Wavering over its self-reflection, cold.

Two old women feed it, and a child

Signs are everywhere, words that make no sense

Are spelling out the essence of this place.”

But Shanghai, its leafy Fudan campus and its 25 million souls in the background, was not China. On a side-trip inland to Chengdu, the passengers asleep as the plane droned up the Yangtze valley, I entered Szechuan, the poetic heartland of a country divided, like Ireland, between its urban, rationalistic and political east and its mountainy spiritual west, the territory of its greatest classical poets, the sober government official Du Fu, and the drunkard Li Bo, drowned famously trying to catch his reflection in moonlit water. At Chengdu airport, I was met by Tan, who booked me into a room in a vast old military hotel and introduced me to the legendary Ms Zhai, a beautiful chainsmoker who ran a poet’s cafe around the corner, and was the doyenne of what was known as the “Misty” school of poets.

The “Misty” poets, it appeared, had emerged in the 1980s in reaction to the orthodoxies, pedagogical and poetical, of the Maoist era and the perfect but rigid classical Chinese tradition, passed along by generations of rote learning and classroom tyranny. Emotional, sensual, “misty” in classical terms, shot through with the violences, dislocations and extremities of war and communism, her long lines, body imagery and borrowings from the modern obscurities of western poetry, had made her a celebrity. Through Bao and the Chinese poetry grapevine, she had invited me to read at her White Night cafe.

Whatever my apprehensions, I knew by now I was not to die on this trip

This wonderfully preposterous event, involving Chinese professors, university students, joint-smoking hill-tribe poets and illiterates off the street, left me with an abiding conviction – that there is such a thing as inspired misunderstanding between peoples of goodwill comically ignorant of each other, which creates an energy that never would otherwise have existed. Beneath the flashing lights and projected texts on the walls, with Ms Zhai in her feisty hat puffing away in front of me, I realised something as old as the transfer of Zoroastrian texts up the Silk Road was happening, and with roughly the same level of comprehension.

Two days later, after rainstorms in the mountains and flight cancellations all over China, the scene had changed again to a Qing dynasty palace and a banquet of poets overlooking the famous lake of Hangzhou. Famous like Hangzhou itself for its sacredness to poets and lovers, its dream-otherness to industrial Shanghai an hour away by train. A huge revolving table endlessly replenished, the clinking of glasses as the poets, under the influence of potent rice wine, staggered around toasting each other individually, with the ferries dark against the glitter of the lake outside, and the green hills in the distance. The poets, I had noticed, had no particular work to go to. This, it was explained to me, was because they had been fired from the local media for outspokenness against the G20 summit.

Whatever my apprehensions, I knew by now I was not to die on this trip. We sped north, Bao and I, on the intercity train to Beijing, for the final dates at Peking University, and were met by students who hauled our luggage through the underground and set us up in a hotel opposite the university gates. Next day, between the lectures already mentioned, a Eurasian girl with extraordinary cheekbones, studying “to be a literary critic” showed me around the small hive of intellect, famous since 1919 and the foundation of the Chinese republic, through Tiananmen Square to the present disturbances, for its student interventions, sometimes tragic, always crucial, in the life of the country. A hospital, trysting places by a lake, a stone boat off which to jump drunkenly on graduation day, a bicycle cemetery and a dormitory for the old scholars and teachers to see out their days on campus, attending lectures by their own past students. A Greek city state within a state, with the Xinchan mountains for philosophy in the background.

Crossing Tiananmen Square the day before departure, I watched a gaggle of schoolchildren from the provinces led by their teacher, and thought of the final scene in Dostoyevsky’s Brothers Karamazov. Children at the beginning of a new era, and their mystic instructor, preparing them for the unknown Chinese century they were to be part of, long after I had gone.