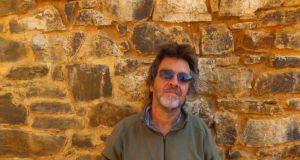 Christopher Woodall: The people in November are more real to me than all but my closest friends: there is nothing I won’t ask of them, no depths of psychological intimacy or sociological positioning that I’ll shrink from plumbing

Still new to authorship, the questions people ask me about writing frequently leave me baffled, especially the ones that at first sound so easy.

Like a political novice with no media training, I tend actually to think about any question put to me and then flail and lunge for something plausible. By the time I realise what the occasion demands, the questioner is walking away, looking short-changed.

So why do I write? In the case of November (Dalkey, 2016) and its sequels, I write because the people who interest me and constitute my subject keep me thinking and the only way for me to think at all effectively is to write. Indeed, the writing is the only place where any effective thinking occurs.

In the case of Sweets & Toxins (Dalkey, February 2019), the stories caught me off guard, like accidents that had long been waiting to happen.

And why do I write just what I write? Because if nobody else seems to take much of an interest in the individual and collective experiences of industrial workers and migrants in 1970s Europe – the ground of November and its sequels – that too seems like a good enough reason to keep on delving deeper, hoping my interest will one day prove infectious.

Why don’t I write something else? This time a flip answer is all too easy: that’s what everybody else is doing and why would I want to crowd them?

Luckily, there are other questions that interest me more than the three intractable whys. Here are a couple I sometimes ask myself:

What’s harder to write: two thousand words of November or its sequel or a two-thousand-word story? And how do the processes differ?

With any novel I might write, there’s a constant to-ing and fro-ing between, on the one hand, a background world of text that over years I’ve been writing headlong but accumulating patiently, scrappy reams scribbled haphazardly and squirreled away in innumerable files and, on the other hand, the composing of a fiction as it emerges line by line, chapter by chapter, subject to an obsessive choreography and attention to proportion, position, pitch and pace, vigilant that everything always relates to everything else.

As the novel takes shape, it feels as if at every moment there is a vast inverted pyramid of scrappy texts, ideas, voices and dialogues bearing down upon the winking cursor, jostling for attention and, suddenly, when it counts, all inadequate. Once I get the cursor to move, that’s the final draft, right there. Because whereas the slog of constant writing lets almost everything in, the final quick burn of composition shuts almost everything out.

Story-making entails an entirely different process, coming out of a central idea, a perception, a memory, a moment recorded absent-mindedly then stumbled upon months or years later in some dusty notebook or forgotten “folder” and then thrust beneath the magnifying glass of a vagrant imagination. In contrast to the novels, nothing in any of my stories needs to relate to anything outside. With the stories, there is no writing/composition split. It’s all one.

What comes first for me, character or plot?

Again, the novel and the short story seem different in this regard too – though, irrespective of form, I don’t in fact think in terms of either character or plot but really only of people and events. In the case of November and its sequels, I spend longer pondering and researching the different traits, idiosyncrasies, voices, habits and backgrounds of the Algerian Rachid and his family, the young gypsy Bobrán and his German lover, Mathieu the nightshift supervisor and his dementing wife, the Englishman Eric and his prospective girlfriend, the factory-owner Gérard and his Chilean-refugee chauffeur – to cite but a few – than I have spent dwelling on any “real” person I’ve ever known – with the exception of my partner and my son.

The people in November are more real to me than all but my closest friends: there is nothing I won’t ask of them, no depths of psychological intimacy or sociological positioning that I’ll shrink from plumbing. And, yes, increasingly, they interrogate me back. So to return to the question, with its terms duly altered, in my novels people come first, second and last, while events merely emerge from individuals or from people’s collisions and collusions, or surface like flotsam from forces beyond individuals’ control, eg from movements in history, social conflict, economic vagaries or, why not?, geophysical or climatic lottery.

In the stories I write, people play a different and almost subsidiary role because it is the original prompting situation that drives the story – the dream of a dismembered lover that brings a sense of closure and contentedness (Loved to Pieces) dictates (or casts) the kind of person I need for the part; the report of her memorial service to an ageing woman who has faked her suicide and disappeared (Dead and Alive) throws up a slew of vividly strange individuals; a gentle clochard’s shrugging-off of violence perpetrated against him (American Shades) remoulded and, as it were, repurposed the remembered portrait of a real clochard I once got to know; the slow accumulation of half-truths in polite conversations about intimate matters (Lying to be Cruel) drags into harsh focus overlapping layers of unhappy and thwarted family relations. Here the cursor feels positively weightless: since nothing in any story has to be related to anything outside the cursor is free to leap in any direction. The story seems to write itself, often from the inside out, or sideways or backwards, hardly ever from start to finish.

Why did I turn to stories after completing November?

Nobody in their right mind would complain about the privilege of spending one’s days alone at a desk spinning stories about people far away and/or long ago. I found, however, at the end of November, that I was all used up and, though eager to get on with November’s sequel, I sensed that for a long time I would be able to do nothing more satisfying than write, that is to say, accumulate background text, scribbling into new documents as I imagined my way deeper into the lives and minds of my people and subject. I began to miss the heady thrill of composition, the snatching from seeming impossibility of that first and final draft. The stories provided an outlet. In a mere matter of weeks – sometimes even quicker – a whole story would take shape, if never perfect, as good as I could get it. The process was often pleasurable and the gratification of a presentable result was almost immediate. What more could I ask? I hope and believe the stories in Sweets & Toxins are good in themselves, but they also served as a limbering up for the next novel, which is now at last under way.
Christopher Woodall is author of Sweets & Toxins, published by Dalkey Archive Press