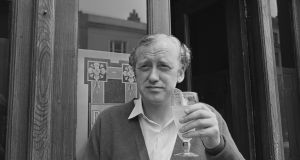 Nicol Williamson in 1968: probably the most exciting actor of his generation. Photograph: Daily Express/Getty Images

One of actor Nicol Williamson’s earliest film roles was as Gunner O’Rourke, an unhinged, alcoholic Irish squaddie in Jack Gold’s The Bofors Gun. It’s a tale of barrack-room bullying set during a freezing but ostensibly mundane night of National Service duty in 1950s West Germany.

David Warner, anticipating an imminent promotion, played the bombardier in charge. All Warner needs is just one night of calm – no boozing, no trouble and no reports. Is it too much to ask for? The answer is, in this case, a resounding Yes. O’Rourke senses Warner’s weakness and knows he can get away with anything because of his superior’s reluctance to report him.

It’s easy to see O’Rourke as a psychopath. But such is the skill of Williamson (and screenwriter John McGrath who wrote the play on which the film is based) that our sympathy occasionally shifts to O’Rourke, the Catholic private raging against “weaklings, bedwetters and hypocrites”. O’Rourke knows that Warner is only trying to placate him – not out of concern for him – but to avoid trouble. It’s the hypocrisy that riles him. O’Rourke takes off on a massive bender with his best mate (played by real life buddy John Thaw), lays into everyone in his way (including Ian Holm as a Protestant Irishman), and eventually succeeds in taking his own life. In so doing, of course, he also scuppers Warner’s chances of promotion.

Conveying O’Rourke’s self-destructiveness was easy for Nicol Williamson. He was apolitical but always a rebel. He believed that rules were meant to be broken. Tell him to “go right” and he would go left. He could smell falsity and servility a mile away. This was the guy who thumped Broadway producer David Merrick after the legendary showman ordered cuts to a production, who thrashed a fellow actor on the buttocks because he felt his performance was listless, who berated noisy schoolchildren during performances of Macbeth at Stratford. I could go on . . .

These were just the reported incidents. He’d run across the road to a pub during the interval while playing the lead during the run of The Entertainer. Theatregoers would find “Archie Rice” downing spirits alongside them.

Playing the rebel came easily to Williamson. He was born in 1936, in Hamilton, near Glasgow. The Williamsons were Clan Gunn, an old Highland clan associated with lands in north eastern Scotland. His parents moved to Birmingham when he was just 18 months old. He was then evacuated to his grandparents’ house in Scotland on the outbreak of war.

The peripatetic childhood marked him. He always seemed on the move. He married actress Jill Townsend in the 1970s and lived in London. But a combination of high tax, a messy divorce, unexceptional movie offers and his estrangement from the theatrical establishment sent him into “exile” – first to New York for stage work, then to Amsterdam where he bought a house by the Singel and, finally, to the Greek island of Rhodes.

Despite Williamson’s rebellious nature, some directors loved him, in particular Jack Gold, with whom he collaborated several times. A movie rematch with Gold (and writer McGrath) following their successful collaboration on The Bofors Gun came with The Reckoning. Nicol again played an Irish Catholic, in this case a successful London businessman (Michael Marler) who returns home to Liverpool to avenge his father’s murder. Marler is a Pygmalion-like character, transplanted to the “idyllic” backdrop of Virginia Water.

At a cocktail party, Marler, still mourning his father’s death, reverts to his true “Oirish” persona, singing nationalist songs while swigging from a bottle and mocking the “gin and tonic” upper-class business associates whose company he has always despised. (There’s a great clip of this on You Tube. If all this seems a bit “broad”, even a caricature of an embittered Irishman railing against the “imperialist” Brits, we must remember it was 1970.)

Williamson was, it seems to me, the perennial outsider. Kenneth Tynan, in his legendary essay about the actor, penned at the time of Williamson’s performance in front of President Richard Nixon at the White House in 1970, wrote that he was “proof against John Donne’s belief that no man is an island, entire of itself”.

The hellraiser tag also stuck but, unlike contemporaries such as Richard Harris and Peter O’Toole, Williamson was never a good self-publicist and couldn’t use it to his advantage. He usually shunned the talk-show circuit and the company of other actors. He didn’t bother to endear himself to anyone. And, unlike O’Toole and Harris, he Nicol seemed happiest treading the boards.

Not that movie stardom was unappealing to him. He had once sought the lead in This Sporting Life, a part that catapulted Harris to international stardom. Nicol actually followed in Harris’s footsteps on stage twice. He played Sebastian Dangerfield, the drunken Dublin law student, in The Ginger Man. And he was the deranged civil servant, Alexei Poprishchin, in Gogol’s Diary of a Madman. Both times he won better reviews than Harris. Yet he lacked a movie to make his name in America.

Williamson scored another stage hit in Samuel Beckett’s Waiting for Godot in which he played Vladimir – with the wonderful Jack MacGowran as Lucky. Beckett was so impressed by Nicol’s performance that he invited him to his home in France. Nicol’s lifelong depressions, even his obsession with death, struck such a chord with Beckett that Nicol, along with MacGowran, Patrick Magee and Billie Whitelaw, became one of the playwright’s favourite interpreters.

Williamson’s ’s death in 2011 was greeted with inadequate obituaries that even mistook his age and where he lived. By then he was the least well known of a crop of legendary hellraisers even if, to most objective observers, he was the most gifted. One of his last stage roles was as another character of Irish extraction, Jack Barrymore, in a one-man play, A Night on the Town with Jack Barrymore.

Coincidentally, his most iconic movie role was as Merlin in Excalibur, filmed by John Boorman over five rainy summer months near the director’s home in his beloved Ireland. The perpetual bad weather led to lengthy spells in the pub while they waited for shooting to resume. According to co-star Paul Geoffrey. “We’d start lunch at about 11am and by the end of the lunch – after a few coffees and brandies – Nicol Williamson and I would be arguing whether it was raining or not.”

Somehow it seems appropriate that Williamson’s most famous movie should have been filmed in Ireland, the country that gave him some of his most memorable roles.

He was indeed an extraordinary actor – “a dream to some . . . a nightmare to others”. But on his day he was probably the most exciting actor of his generation.