Free Woman by Lara Feigel review: A journey into the life of a feminist icon 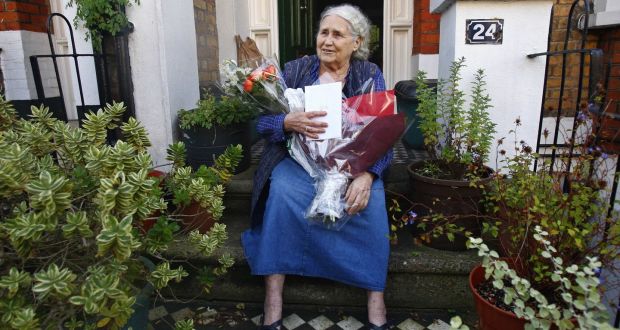 British novelist Doris Lessing on the doorstep of her house in London in 2007. Lara Feigel explores Lessing’s work and life for her novel. Photograph: Kieran Doherty/Reuters

Lara Feigel is a brave woman. As an academic, Reader in Modern Literature and Culture at King’s College, London, she might have been expected to produce a book on Doris Lessing’s work which is detached and analytical. However, she hasn’t. Her examination of Lessing lays bare not only Lessing’s life, but her own.

“There were too many weddings that summer,” writes Feigel. As she sits beneath “a hundred metres of tasteful Liberty print bunting that the bride, her sister and their mother. . . had sewn by hand” she hears the words of Anna Wulf, the central character of Lessing’s ground-breaking novel The Golden Notebook echoing in her ears. “I am only interested in stretching myself, in living as fully as I can”.

Happily married with a young son, hoping to give birth to a second child, with a job she loves, and a supportive husband, Feigel wonders why it is that none of this seems enough. As the summer passes and she re-reads The Golden Notebook, she realises that she needs something else in her life. That something is freedom. Where and how will she find it? She sets out to examine Lessing’s novels, looking for the freedom with which she says “Lessing was . . . obsessed” while at the same time turning her critical gaze on her own life, in all its intimate details.

Free Woman is a rare and unusual book. It is part literary criticism, part memoir. It is wholly engaging. Feigel sets off on a journey which takes her deep into Lessing’s work and life. She travels, both metaphorically and literally, in Lessing’s footsteps. She asks herself the big questions, the kind of questions which Lessing too asked. What do I want? How do I want to live my life? How as a woman can I be free?

Of course, freedom for a woman of Feigel’s generation was quite differently achieved than for Lessing who was brought up in colonial Rhodesia in the 1930s. Lessing was 19 when she married Frank Wisdom. Her son, John was born soon after, quickly followed by Jean. But Lessing wanted more from life than marriage and motherhood and when John was three and Jean, one and a half, she left her children and their father.

Feigel struggles to understand Lessing’s decision, particularly as Lessing’s subsequent marriage to Gottfried Lessing, a comrade from the Communist Party, brought another child. However, Feigel knows that she too wants more than just motherhood. She wants to “disentangle my consciousness from my son’s in a way the women around me seemed to find less necessary”.

And what of marriage, commitment, monogamy? Feigel watches as her friends succumb to the lure of the wedding, while her own marriage begins to fall apart under the pressure of trying to conceive a much wanted second child after a miscarriage. She turns again to Lessing for understanding. As she reads in The Golden Notebook Lessing’s vivid and sensual descriptions of orgasm, Feigel reflects on her sexual relationship with her husband. She describes her own desires, needs and wishes. There are times when the reader wants to stop her, to protect her from the gaze of strangers, but Feigel is true to herself. It is no surprise to read that although Feigel eventually gives birth to a baby girl conceived through IVF, her marriage does not survive.

Feigel travels to Zimbabwe, back to Lessing’s childhood home. She searches for the young Doris, “legs bare and brown”, in the landscape which Lessing loved, which she described as “myth-country”. Feigel brings us with her as she finds the farm where the Lessing family struggled to survive. A modern bungalow has been built where Doris’s family’s mud house once had been. Feigel spends the night in the house, as the sun sets then rises on the hills around, unchanged for millennia. It is deeply moving to feel the presence of Lessing, in Feigel’s intense descriptions of the land and the people.

Free Woman is a brave book, written by and about a brave woman. Feigel’s willingness to lay bare her own life allows the world of Doris Lessing, in all her complicated, contradictory, self-centred, generous genius, to come to life. But what of freedom? As Feigel says in the Afterword in relation to her husband, “my . . . quest to understand freedom has made painful reading for my now ex-husband and I am grateful for his forbearance.”