Kevin Barry: The belligerence and brilliance of Flann O’Brien 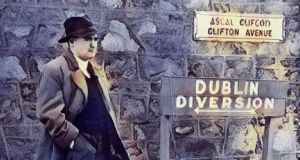 Flann O’Brien: a belligerent aspect, a savage and inky-black humour, and a default stance of blithe affront to the world

It feels like a different world. In fact, the city of Dublin, as it is presented in No Laughing Matter – and it is a character or player in its own right in Anthony Cronin’s biography of Flann O’Brien – seems to be not just of another era but of another dimension entirely.

As the pages turn we come to imagine a monochrome place in mean winter light, a place of dank streets, broad-brimmed hats, priestly glances. The wind comes in a cold sweep from the bay and the ceaseless rain that it carries defines the ambience. It’s a city where the attitudes are stiff and the licensing hours are tight. The shabby realities of the newly independent state betray the very dreams that fused it and, as a result, there is a waft of bitterness on the air, and it rises above even the stench of the usual bitternesses. Revolutionary fervour has transmuted into a new conservatism; the city attaches itself to ideas of the conventional and the respectable almost religiously; and thus it is a place where the boredom is so thick on the air that it might almost seem to have mineral properties.

O’Brien, or O’Nolan, or O’Nualláin, was a capricious character, a man whose personal music or defining note could change on a shifting of the breeze

It was just such a city, however, that happened to provide the optimal conditions for the emergence of a great fabulist, of an endlessly fiendish literary prankster, of a Flann O’Brien. It was the sort of place where, if you didn’t make mad stuff up, you’d have gone off your game altogether.

Flann O’Brien had a belligerent aspect, a savage and inky-black humour, and a default stance of blithe affront to the world, and all of these were massively influential in the Dublin of his time. His poses (if we are unkind enough to call them such) were adopted almost wholesale by a large proportion of the native literati and (if we are charitable enough to call it such) the intelligentsia.

The book is scrupulous and even-handed and it never baulks when it comes to the difficult places. It becomes clear quickly that in tracing from a Strabane cradle to a premature grave the life of O’Brien, the biographer set himself an especially tricky task. O’Brien, or O’Nolan, or O’Nualláin, was a capricious character, a man whose personal music or defining note could change on a shifting of the breeze. If he was sometimes playful and comic and light, he could be thorny and difficult, too, and he could flitter from one state to the other inside the beat of a remark. But the book radiates a warming fairness – Cronin is never blind to his subject’s faults and weaknesses, which were legion, but always he provides (or at least tries to provide) a forgiving context for them.

It should be noted that Cronin is himself a very fine stylist. That style is careful and it reaches always for the contextual overview; it is even, at times, pleasantly mandarin; but the biographer’s own voice emerges clearly in a way that feels off the cuff, and it is full of a kind of wry, sad humour.

Of course he had natural advantages when tackling this project – Cronin was himself an intimate and a confidante of the scene he described. He was a novelist and a poet of high standing, but also he was a classic literary middle-man, that quietly busy archetype whose thankless job it is to make the connections on which a literary culture thrives. He excelled in this role – indeed he can be seen as a kind of orchestrator for the Dublin literary scene of the 1950s and 1960s.

As Cronin traces patiently the life of O’Brien, he reverts always, for telling detail, to the fictions and the newspaper columns. He understands a fundamental truth in documenting the life of a writer: if you look hard enough, and if you dig deep enough, all of the clues and all of the secrets are buried in the work.

Cronin understands, too, that there is nothing mysterious about prose style. A writer’s style is a direct projection of the personality, in fact of the soul, if such a thing can be said to exist. As that style is channelled directly from the subconscious, it contains base and original truths, and it all comes out on the page. A writer cannot hide from himself or herself on the page, most especially in the writing of prose fiction. Thus Cronin uses O’Brien’s work as the sourcing depot for the details of this careful and telling portrait.

He has other and significant resources to draw on. Given the almost hysterically talkative nature of the milieu it depicts, it is natural that this biography should draw much of its energy from verbal sources. Friends, relations, even combatants of O’Brien were enlisted by Cronin to give their views, their sides and their spins, and the narrative comes together as a symphony for these voices.

Let it be said that the book is sometimes very funny. It seems a casual thing to note but in fact it is massively important – a book about Flann O’Brien that didn’t have a decent few laughs in it would be a disaster. Of course, given his quick decline and the endless frustrations of his artistic career, the humour within these pages necessarily leans towards the tragicomic variety, but as was the life, so must be the biography. As the story of that life develops here, the reader will find herself saying over and again, “Poor Flann” ... “Poor Flann”, but also, contrarily, it will be difficult not to allow the corners of the mouth fold into the upturn of a smile.

The darkness is as important to the book as the light. The narrative accretes many tiny sadnesses as it goes along. These are mostly made up of the type of setbacks and reverses suffered by every and any artist, but Flann took them so badly, in fact so bitterly, and it is an uncomfortable truth the biography springs when it shows that in effect the writer’s work knocked his life out of whack. He simply wasn’t able for the reverses, for the setbacks.

The trajectory became almost instantly a downward one. O’Brien was a star turn at University College Dublin, especially noted for his razor-blade heckles and indignant interruptions at debates of the Literary & Historical Society. Following the publication of At Swim-Two-Birds, and the subsequently expressed admiration of no less a figure than James Joyce, he became fabled, while still a very young man, around the city’s literary boozing dens. But from there on in, things began to stagnate, and he couldn’t cope with the fact of his early promise so quickly seeming to fade. He fell ever the deeper into the drink and, for public consumption, he even started to perform a kind of stage version of himself. Inevitably, when the mask slipped, there was little enough left behind it.

Cronin is dogged and nerveless in his task as he shows the decline. He recognises the cruel truth that literary ambition is never without victims, that it can destroy lives. But what this book shows also is that the literary past is never stable: it is forever shifting and rearranging back there in the murk. The resurgence of Flann’s reputation – in his stock shares, as he himself might have mocked it – came with the republication of At Swim-Two-Birds in 1960, but already – and here the defining tragedy of the story emerges – it was too late for him to fully capitalise. The drink had done its inevitable work by then, and the talent was tired. You sense from these pages, also, the way the endless column-writing for the Irish Times knocked some of the bluster and life out of him - he may have sometimes considered it throwaway work, a money-maker, but it’s the type of work that can take more out of the writer than he quite realises at the time.

Flann’s story, then, is a sad one if we consider it in its present tense, as it unfolded in the moment, and in the glow of the barside lamps. But what an excellent joke, he would have wryly noted, that his star would somehow endure in our firmament, and that it burns so brightly still.

And what great good luck he posthumously experienced in finding that most elusive of characters – the ideal biographer. This is a fabulously written and important book, and it honours the vast talent of its subject.

This is the foreword to New Island’s new edition of No Laughing Matter: The Life and Times of Flann O’Brien, by Anthony Cronin