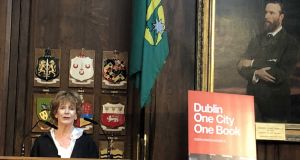 Edna O’Brien speaks at the launch of the Dublin One City One Book festival on Wednesday. Photograph: Martin Doyle

Lord Mayor of Dublin Nial Ring has launched the programme for the Dublin One City One Book Festival, which this year celebrates The Country Girls Trilogy by Edna O’Brien.

The festival, led by Dublin City Council, encourages Dubliners to read a book connected to the city during the month of April. Previous titles have included Roddy Doyle’s The Barrytown Trilogy, James Plunkett’s Strumpet City and James Joyce’s Dubliners.

Last September, The Country Girls Trilogy was announced as the Dublin One City One Book choice for 2019. The trilogy features The Country Girls and its sequels The Lonely Girl and Girls in their Married Bliss. In honour of the festival, Faber & Faber have produced a special edition of the trilogy introduced by author Eimear McBride.

This year’s programme includes a variety of public events inspired by the trilogy, including dramatised readings and a Dublin City Libraries exhibition of banned books entitled Evil Literature. There are also talks, workshops, seminars, screenings, and more.

The flagship event of this year’s festival is An Evening With Edna, which will take place in The Round Room at the Mansion House on April 24th. The evening will see Edna O’Brien interviewed by fellow scribe Colum McCann and will feature musical performances from singer Moya Brennan and Cormac de Barra. Actress Séana Kerslake will also be on hand to read excerpts from The Country Girls Trilogy. The event is free, but booking is essential.

Speaking at the launch in Dublin’s Mansion House, the Lord Mayor said: “Edna O’Brien is one of Ireland’s most talented, treasured and most read authors, so I am very proud that our capital city is honouring her talent and legacy by selecting her much acclaimed work The Country Girls Trilogy as the Dublin One City One Book choice this year.”

“Dublin City Council’s initiative is a creative and inclusive way to get all our citizens reading. With copies of The Country Girls Trilogy available to borrow for free throughout our public library network, it just remains for the people of Dublin to embrace and enjoy this great book which I know they will.”

For her part, Edna O’Brien said she was “delighted” for the book to be selected as this year’s Dublin One City One Book.

“I worked in Dublin as an apprentice pharmacist from 1948 to 1952, so it’s where I first encountered literature and set out on the very secret and profane matter of writing The Country Girls Trilogy,” she said.

“I never dreamed the Trilogy would last so long and make it to this winning post. I am delighted and hope for new readers who won’t have to hide it under the bedcovers as they did in the sixties and onwards . . . Dublin has given me longevity.”

Dublin’s acting city librarian Brendan Teeling encouraged Dubliners to take part, promising a “rewarding experience” for all who do so.

“We work hard every year to choose a book that will capture the imagination of the people of Dublin, of all ages and walks of life,” he said. “Exquisitely written, moving, humorous, full of compelling characters, and still as relevant as when it was written in the early 1960s, I know that The Country Girls Trilogy will prove a rewarding experience for all who engage with Dublin One City One Book 2019.”

This year’s festival kicks off on April 1st and continues for the entire month. All information can be found here: dublinonecityonebook.ie