Merchants of Truth: a tough-minded take on the state of modern journalism

Notwithstanding her apparent lapses on attribution, former New York Times executive editor Abramson is savvy in her analysis 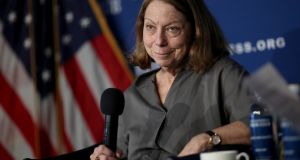 Book Title:
Merchants of Truth: The Business of News and the Fight for Facts

The brief, tumultuous life of Merchants of Truth contains echoes of its author’s career. Jill Abramson scaled the summit of US journalism as the first woman executive editor of the New York Times before being ousted in 2014; last week, her much-anticipated analysis of a news industry in crisis and transition, riding high after generally favorable notices, was rocked by plagiarism allegations seemingly sprung on Abramson, mortifyingly, during a TV slot. What to make of a book scolding loosey-goosey editorial practices in new media assailed by credible claims of unacknowledged borrowing from others itself? Topping 500 pages, there’s a lot to parse already in Merchants; the hoopla around it doesn’t lighten the load.

It isn’t hard to see why Merchants ruffled feathers (I did say generally favourable reviews), particularly those of one of its subjects, Vice: it’s a tough-minded plain-spoken account of the state of journalism in our times that doesn’t shrink from excoriating imposture. In headlong freight-train prose, Abramson chronicles the fortunes of Vice, BuzzFeed, the Washington Post plus her old paper, and, in their midst, her personal rise and fall. The line-up is all-American but these outlets have global reach and, in an age of fake news, their problems are ours.

Vice originated in Montreal in 1994 as a Gen-X ‘zine with punk attitude and bawdy humor – a kind of scuzzier, “street” version of British lad mag Loaded from the same era. Hardly the stuff of which media empires are made but, transplanted to Brooklyn, it had a beat on the coveted hipster demographic. BuzzFeed, a warmer, fuzzier creature (more like a cute internet cat), was conceived by culture jammer, meme egghead and HuffPo co-founder Jonah Peretti as a testbed for his ideas on internet virality – a “viral-industrial machine,” Abramson writes, that would extrude viral content like widgets. When Vice branched into news, brash frontman Shane Smith tweeted, “Lets f*ck news in its naughty ass”; BuzzFeed saw in news a line on more “likeable content” to spur Facebook shares (“Social Lift” – the coin of its realm). But both shared a “reverse-mullet structure,” Abramson writes – “mostly party in the front with business in the back”: parlaying their cachet and flair for captivating audiences into deals with sponsors to develop barely differentiated “native” ads mingled promiscuously with their editorial wares.

Juxtaposed against the hockey stick growth curve of these “upstarts” are the swooning fortunes of the aughties Post and Times, their blueblood owners clinging on, trying to navigate the headwinds of internet disruption but saddled with a commercially inconvenient mission – “afflicting the comfortable” – and scruples – a “moat” between business and editorial. Their story is one of upended economics: shrinking ad sales; an aging print subscription base; younger readers reared on the “information wants to be free” web.

Yet both pull out of “managed decline”. The Times finally finds a winning formula for its paywall – semi-porous (free articles as bait) rather than impervious-and reinvents itself as a “digital-first” newsroom. It also becomes a full-service media shop with an in-house ad agency (developing native ads, though more demarcated than BuzzFeed’s and Vice’s) and extends its franchise into podcasts and other products. The Post, bailed out by Jeff Bezos, an ideal suitor – internet-savvy, sufficiently busy not to become unduly meddlesome and with, for practical purposes, bottomless pockets – makes many of the same moves. But it takes off in an even techier direction: “embedding” coders beside journalists; inventing new gizmos to measure the traction of articles. Besides reinvigorated reporting, it also churns out its share of clickbait, Abramson writes. Both see a post-2016 “Trump bump” in subscriptions.

While legacy media rallies, new media stumbles. Vice and BuzzFeed fall short of earnings projections. Vice’s macho misogynistic workplace culture takes a #MeToo shellacking. And BuzzFeed finds it’s at the mercy of the internet platform it depends on for distribution. Facebook with whom its locked in an algorithmic arms race– each grubbing for ad sales – goes from friend to frenemy.

Abramson applauds BuzzFeed’s web-based investigative reporting. But her unvarnished analysis is a tonic to breathless accounts of new media companies inclined to take them at their own reckoning. And she’s no easier on herself. In the spirit of late Times writer David Carr, who in his memoir triangulated his recollections with others’, she flags where her memories diverge from colleagues in recounting her dismissal from the Times. “I was a less than stellar manager,” she concludes, “but I also had been judged by an unfair double standard applied to many women leaders.”

Abramson’s apparent lapses on attribution - six apparently bang-to-rights instances she’s copped to - are disappointing then. She’s said they were inadvertent and relayed “facts” rather than “ideas” or “opinions.” As one of the plagiarized writers noted in Rolling Stone though, this distinction seems disingenuous: they represented others’ reporting. At minimum, it suggests carelessness – doubly unfortunate in that it occurs in an otherwise sharply reported work.