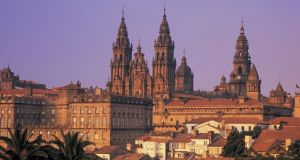 Santiago de Compostela: the frequency with which jubilee years occurred there – every six, five, six, and 11 years – is probably the best explanation for its extraordinary popularity

Today’s walkers and cyclists who follow a medieval route to Santiago de Compostela from Ireland like to believe they are adhering to a medieval tradition. Are they? The destination is still Santiago in northwest Spain, as it was for medieval pilgrims. But is there anything other than vague sentiment to connect the experience of the modern Irish walker on the Camino de Santiago with that of those who made the hazardous journey to Galicia in the fifteenth century or before?

Obviously, the infrastructure of travel is totally different. Few modern pilgrims, having walked or cycled to Santiago, turn around and embark on the journey home by the same means. Almost all international pilgrims simply book a flight home, something a medieval pilgrim could not begin to comprehend. Similarly, we struggle to comprehend some other cultural and religious as well as physical limitations on the lives of medieval pilgrims. But yet, as one walks the Camino Francés or other traditional route to Santiago today, the pull of history is incredibly strong. Pilgrimage culture has deep roots in Ireland as in Spain.

Santiago de Compostela prospered as an internationally popular pilgrimage destination from the twelfth century until the Reformation. A local archbishop, Diego Gelmírez (d.1140), vigorously promoted the cult of St James, and Santiago joined Jerusalem and Rome as one of the three major pilgrimage destinations of the Christian world. This helped balance the map of Christian Europe, giving people living on the Atlantic edge of Europe an accessible alternative to Rome and Jerusalem.

The Camino de Santiago is something in which Irish people have participated for many centuries, though the route they took differed from the well-known Camino Francés. Pilgrims could sail from Ireland or England on the normal merchant ships of the day. These ships, normally used for trade with Iberia, were sturdy three-masted carracks and caravels. Similar ships allowed Vasco da Gama reach the Indian Ocean from Lisbon in the 1490s. The idea that medieval Irish pilgrims went to Santiago in small open rowing boats is entirely without foundation.

Pilgrims from medieval Ireland almost invariably made the pilgrimage to Santiago in jubilee years, when the feast of St James (July 25th) fell on a Sunday and special indulgences could be earned. The frequency with which jubilee years occurred there – every six, five, six, and 11 years – is probably the best explanation for Santiago’s extraordinary popularity. Other major pilgrimage destinations such as Canterbury and Rome only had a jubilee every 50 years. Numerous jubilee years at Santiago would occur in the average adult lifetime. In contrast, given low life-expectancy, a jubilee year in Rome or Canterbury might not occur at a time in a medieval person’s life when it was feasible to go there.

In jubilee years ships were sometimes chartered for special pilgrim voyages from Ireland or England. Such schemes allowed Irish people travel at reasonable cost. In the 15th century each ship might carry between 50 and 200 pilgrims, although one larger 320-ton ship carrying 400 pilgrims from New Ross was recorded in 1473. The sea-journey from Ireland took between five and ten days in each direction, with A Coruña a favoured landing point in Galicia. Even pilgrims from the Hanseatic towns of northern Germany travelled by sea. It was quicker, cheaper, and no more hazardous than the overland routes followed by those from inland parts of continental Europe.

There were still dangers, and the Irish annals sometimes mentioned Irish pilgrims being lost at sea. Inadequate supplies of fresh food and water and lack of immunity from continental diseases also caused pilgrim deaths. For most, the pilgrimage was a positive experience, one that other family members opted to emulate. Margaret O’Carroll, of Ely O’Carroll in the Irish midlands, went to Santiago in the jubilee year of 1445 and returned home safely. Six years later, in the next jubilee year of 1451, her husband undertook the same pilgrimage. He, too, returned safely, happy to have gained the indulgences on offer.

Medieval pilgrims returning home to Ireland would have recounted their adventures, recalling the sights, sounds and smells of a foreign country, the food and drink, and the splendour of the city of Santiago with its impressive Romanesque cathedral. Some returning pilgrims might also have conveyed their sense of freedom at being temporarily outside the confines of the local community in which they spent most of the remainder of their lives. Perhaps the journey also gave them a sense of the equality of all humans in the face of the power of nature as they made their way across the Bay of Biscay.

The fluidity that is an intrinsic part of pilgrimage allows long-established pilgrimages evolve and retain their relevance in changing times. Adherence to traditional norms and beliefs is not necessary. For most Irish people walking the Camino de Santiago today, the journey is not even remotely about devotion to St James the Great. A connection back to the medieval world persists, however, in the inherent attractiveness of the pilgrimage phenomenon within and beyond the Christian tradition.

Pilgrimages allowed medieval people embark on a spiritual quest beyond the control of a local institutional church. It may not have been a conscious objective but the journey would have helped them come to a better understanding of their place in the world. Their eyes were opened to worlds beyond the confines of their lives to date, seeing new landscapes, new horizons, new peoples, new possibilities, while coping with the often mundane personal challenges of the arduous journey. In time, they would reflect on those experiences within the context of their prior cultural, spiritual and social understanding. Then as now, in ways that are unprescribed and difficult to define, such pilgrimages change the world, one person at a time.
Bernadette Cunningham is author of Medieval Irish Pilgrims to Santiago de Compostela (Four Courts Press, €19.95). A three-day conference on Ireland-Galicia links through the ages takes place in Santiago on  May 9th-11th. See irishsettlement.ie