Dan Boyle, author of Making Up The Numbers: Smaller Parties and Independents in Irish Politics, on the important role played by challengers to mainstream Irish parties 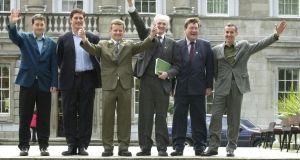 The trinity of Irish politics – Fianna Fáil, Fine Gael and the Labour Party – have dominated but have not monopolised the hearts and minds of voters since the inception of the modern Irish State in 1922.

The combined votes of others, averaging 15 per cent in all general elections, has not been insignificant. There has been a considerable anti-establishment feeling among the Irish electorate. At times one in three voters might succumb to a “plague on all your houses” tendency. At its nadir, particularly during the period 1965 to 1981, alternative voices all but disappeared, at one point collectively gaining little more than 2 per cent of the available vote.

The votes and seats won by Others represent diverse streams within Irish society. Two distinct elements exist in the category. One has been the slew of non-traditional or alternative parties, that have largely come and gone, seeking to “break the mould” of Irish politics. The other has been that been that of the peculiarly Irish phenomenon – the Independent.

Despite wanting to be seen as apart, many of these “independents” and several of these smaller parties were reactions from within the existing political system. Born-again outsiders wanting to recant their long-held insider positions.

Our system of voting – Single Transferable Vote Proportional Representation (STVPR) – has allowed, even encouraged, these rebellions to occur. It is one of the fairer systems in existence, but for the others in Irish politics the votes they have gained, through most times failing to win sufficient critical mass, have often given a greater bounce to Fianna Fáil and Fine Gael, than to elect a more proportionate number of independent and/or smaller party TDs.

Having a method of voting that allows independents and representatives from smaller parties be elected has meant little where the culture to see such representatives elected does not also exist. Malta is one of the few countries that shares Ireland’s system of voting. There only two parties secure election to its parliament. Between them the National and Labour parties win 97 per cent of the vote. Other parties and independents candidates do not get encouraged.

So the political climate in Ireland has been more advantageous for those outside the mainstream. 551 TDs who were Others have been elected since 1922. That’s 63 more than have been elected for the Labour Party. Of these, 306 have been representatives of smaller parties, with 245 being elected as independents.

The uniqueness of the independent public representative in Irish politics has been their ability, free from the shackles of internal party discipline, to be anything and everything to their electorate. Often they get portrayed as the mischievous bard of whom the chieftains live in fear, lest a well-placed barb might undermine their authority.

Irish independents tend to specialise less on bills and more on bailiwicks. The local is everything. Many Irish voters don’t want to elect legislators. They prefer to elect superannuated councillors as a reward for service given. Localism, the mechanism that powers the parish pump, which in turn waters the crop of clientelism, is the culture in which independents have thrived in Irish politics.

Having a tendency to being colourful, larger than life characters has been another characteristic that has favoured the election of many independents.

Smaller parties in Ireland have not prospered for precisely the opposite reasons. In seeking to present alternatives to the traditional parties, new parties often chose to do everything differently than their established rivals. Having policies informed by consistent political philosophies; seeking to interact with the voting public by means other than clientelism, promised many new dawns but delivered false ones.

The diffidence of smaller parties may have affected their sustainable political futures, but it created a greater culture of innovation in what for the most part has been a fairly moribund political system.

Different smaller parties at different times have managed to change political priorities. At their most successful some of these parties have helped shift the very basis on which politics has been practiced in this country.

Smaller parties proved themselves to be useful conduits in bringing politicians who had been active under the Westminster system into the political life of the new State.

Their end lives, for those parties that didn’t fade into the sunset, would be to be assimilated into one of the established parties, usually Fine Gael, sometimes Labour. These mergers, more often absorption, usually achieved no mutual benefit as the subsequent combined votes were often less than that won at a previous election.

The diversity of political choice in Ireland, particularly in recent years, has acted as an effective safety valve. Attempts at establishing extremist political parties, single focus (such as anti-immigration) or religious-based parties, have all proved unsuccessful.

The impending general election might see a slight rollback in the votes of others. It will still remain a significant vote, very much above average. A vote that will have to be considered when any future government is being formed. It has taken Ireland a long time to appreciate the concept of political choice. Let’s hope we continue to do so.
Dan Boyle is author of Making Up The Numbers: Smaller Parties and Independents in Irish Politics (The History Press Ireland, €20). He is a former chairman of the Green Party