15 years after it was published, a new edition of Irish Media: A Critical History brings the story of Irish papers and broadcasting to date 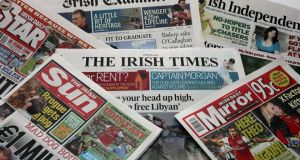 Not all is gloom and doom: legacy media remain the most trusted newsbrands and their content attracts audiences. Photograph: Eric Luke

When the first edition of John Horgan’s Irish Media appeared in 2002, the future for Irish media looked relatively bright. Yes, there were threats: an increasing level of competition from overseas newspapers and broadcasters, and looming privacy legislation and/or a state-run Press Council. But even after the dot.com bubble speedbump, the underlying economic fundamentals of the press and broadcasting sectors looked basically sound.

A growing economy meant increasing levels of advertising expenditure which rebounded to the benefit of all commercial media players (including RTÉ). Sales of the top four Irish-owned daily newspapers – the Times, Independent, Star and the Examiner – were growing: from 370,000 in 1995 to 460,000 by 2002.

There was a dim awareness that the internet theoretically represented a new challenge to the dominant position of what would come to be known as “legacy” media (print and broadcasting) but at a point when fewer than a third of Irish homes had even dial-up internet connections, that challenge seemed somewhat abstract. In any case, newspapers and broadcasters seemed well placed to exploit the potential offered by new online platforms.

Flash forward to 2017: all is utterly changed. Print sales of newspapers have persistently declined since 2008. The four papers above sell just 236,000 copies as of July 2017. Some titles have closed – the Sunday Tribune and the Star on Sunday – and those remaining occupy an increasingly precarious position. Although Thomas Crosbie Holdings emerged from receivership in 2013 as Landmark Media, it lost the Sunday Business Post in the process, and has just been acquired by The Irish Times subject to regulatory approval. The globe-spanning media conglomerate that was Independent News Media is now largely confined to Irish operations, with revenues falling to €323m from €1.5 billion in 2001. The Times itself has seen its turnover fall from €140m to €80m in less than a decade.

Matters are scarcely better in broadcasting: RTÉ has recorded cumulative losses of €87m between 2012 and 2016 and has been forced to sell off part of the Montrose site in return for a one-off cash injection. Having been launched to much fanfare in January 2015, UTV Ireland immediately struggled to become viable: by October 2015, UTV simply gave up and sold it on to ITV Plc (who would in turn sell it on to Liberty Global in summer 2016). Communicorp’s TXFM ceased broadcasting in October 2016 whilst the group’s Newstalk, which was at the centre of an internal INM dispute over its acquisition value, has never made a profit.

The second edition of Irish Media: A Critical History is an attempt to try and trace what has happened to bring us to this state of affairs. While retaining the original volume’s long durée approach to media history (indeed extending it – where the 2002 edition commenced with the foundation of the Free State, this takes the 17th century as its jumping-off point), the final third of the book focuses on developments in 21st-century Irish media. It traces the emergence of the underlying infrastructures of the internet in Ireland, from the initial piggybacking of narrowband web access on a telecommunications architecture built for voice telephony to the laying of broadband networks, optimised for digital communication (the form in which all telecommunications traffic – voice or data – now “travels”) through to the launch of 3G and 4G mobile networks. It looks at how companies which grew out of television distribution – whether by cable or satellite – have converged to bundle broadband, telephony (fixed and/or mobile) and television services in one offering.

The book suggests that it is the ubiquity of these infrastructures (fixed and mobile broadband) together with new access technologies (ie the wave of smartphones that followed O2’s introduction of Apple’s iPhone to Ireland in March 2008) that have transformed the entire Irish (and international) media landscape.

The success of new communications technologies reflects a changing social context. For the past decade we have lived through a particularly precarious period of history. Events overseas (the US election, the Brexit referendum and civil/proxy wars in the Middle East) directly shape our day-to-day existence. Work is increasingly precarious, characterised by demands for more “flexible” labour (zero-hour contracts and the gig economy). These conditions virtually demand technologies that allow us both to access up-to-the-moment information on world events but also to be permanently accessible to employers, friends and family.

Along the way this information infrastructure has been exploited by purveyors of Web 2.0 and social media to offer us access to platforms which facilitate instantaneous connections. Though notionally free, Google, Facebook and their ilk have commodified users who willingly offer remarkably detailed self-profiles. This data allows web firms to sell tightly-defined users/audiences to advertisers in a manner legacy media have struggled to compete with (despite efforts to bring print and broadcast audiences online via e-papers and on-demand web players). While legacy advertising revenues have stagnated, online advertising sales have thrived. According to PWC research for the Internet Advertising Bureau, the value of the Irish internet advertising market reached €445m in 2016, well in excess of the revenues earned by print or television. Nor is internet advertising migrating to Irish brands online: Google and Facebook alone account for fully two-thirds of all Irish online ad-spend.

Rapidly and dramatically changing market conditions have increased pressure to adopt new market structures. Notwithstanding long-voiced concerns about the threat to pluralism posed by increasing concentration of media ownership in Ireland, there appears to be a tacit acceptance that the only way legacy media can survive is through consolidation. The 2014 Competition and Consumer Protection Act promised to slow the pace of ownership concentration. In practice, the opposite has occurred: at the start of 2015, Liberty Global “merely” monopolised the Irish cable market through its ownership of Virgin Media. By the end of 2016, it owned TV3 and UTV Ireland (rebranding the last as Be3). Similarly in 2015, Rupert Murdoch’s News UK already monopolised on satellite television distribution (through its 39 per cent share in Sky television), accounted for the fourth largest share of Irish television viewers, and was second only to INM in weekly Irish newspaper sales. Following its acquisition of UTV’s Wireless Group in 2016, it also became the second largest private radio operation in Ireland. All of these acquisition occurred with the express approval of successive ministers for communication.

Irish Media: A Critical History tracks these shifts and spells out their implications for our mediatised existence. It concludes by suggesting that not all is gloom and doom: legacy media remain the most trusted newsbrands and their content attracts audiences. Social media platforms recognise that user-generated content alone will not draw in the traffic they need. There is clearly scope for mutually beneficial co-operation (indeed Facebook’s Instant Articles already exemplifies this): the question is whether this can be structured in a manner which maintains the viability of existing newsbrands.
Irish Media: A Critical History by John Horgan and Roderick Flynn is published by Four Courts Press