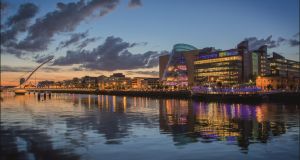 Sean Kennedy
It was about this time two years ago that the idea for Dublin Bay, City by the Sea was first discussed. I’ve been an avid photographer and active member of Dublin Camera Club for many years and was approached to provide the images for a photographic book on Dublin Bay. I met the O’Brien Press and we discussed the format of the book, the type of images they were looking for and then the question of the text was brought up. The idea of writing the text put me outside of my comfort zone but I immediately thought of my daughter Niamh, who has always been the wordsmith in the family. Later that day I announced to her that we were going to be working on a book together. Once she recovered from the initial shock she agreed with great enthusiasm!

As we have lived in Sandymount for over 30 years we were already keenly aware of the beauty and uniqueness of Dublin Bay but there were parts of the bay that were less familiar to us. We sat down together to discuss how we were going to capture this in images and words.

One of our first decisions was to expand the Dublin Bay brief to include Malahide and Portmarnock on the north side and Bray and Greystones on the south side, loosely following the Dart route. I set to work taking the photographs and Niamh started exploring the bay area on foot and by bike. In our initial zeal we planned to go out every weekend to research all that Dublin Bay had to offer. Reality soon set in, however – for me as a photographer, the light and weather conditions need to be just right and this frequently did not fit into Niamh’s busy lifestyle with a full-time job (which she kept reminding me of!) and a hectic social schedule. As a recent retiree I had the luxury of being able to chase the light when the conditions were right like the morning I dropped Niamh and her boyfriend David to the airport to catch an early flight and was able to make it to Howth for sunrise where it was such a clear morning you could see Wales from Howth Head, an image that made the final cut of the book.

When Niamh’s schedule allowed, we did some of the bay’s great walks together and she biked the cycleways with her boyfriend. About once a month we’d schedule a meeting to review our progress and discuss our next step. This meant that talk of the book didn’t dominate all family conversations. It was important to both of us to make sure that we covered each area with equal enthusiasm. This wasn’t always easy as we both have our favourite spots. We’ve had great support from the team in O’Brien Press, which was vital as neither of us had any experience working on a project like this. I don’t know exactly how many images I took but picking the 220 or so images which made the final cut was very challenging. That said, seeing the whole thing come together in the final layout has been really exciting and getting the opportunity to work on this project with my only daughter has been a great pleasure.

Niamh Kennedy
Growing up, my Dad and photography were inextricably linked, whether it was his involvement in the Dublin Camera Club or the hours spent in the darkroom back in the days when printing was an art form in itself. Family holidays in our red and white Volkswagen camper van were punctuated by regular stops to photograph whatever landscape we were passing through. At the time I found this constant stop-start tedious, infuriating even. My refrain was less “Are we there yet?” and more “How are we ever going to get there if we keep stopping every five minutes to take a picture of another bloody field?”

I’m not sure when I fully came to appreciate the talent my Dad has for capturing an image. It may have been around the time that he won a cash prize in a photography competition that helped fund a family trip to New York. Suddenly I saw his photography in a much more positive light.

When he was first approached about taking the photographs for this book Dad was flattered but hesitant to accept. It took some gentle persuasion from myself and some less gentle persuasion from my mother to encourage him to do it. I saw it as a fantastic opportunity to immortalise his skills as a photographer in print. On the day of his first official meeting with O’Brien Press I called to see how he had gotten on and was somewhat taken aback to find out that he had volunteered me to provide the text to accompany his photographs. Thinking about it though, I realised what a fantastic opportunity it was to create a great legacy with my Dad.

Undoubtedly, working together posed some challenges. Dad had just recently retired when we started this project and he’s a man who always need to be on the go, he can’t stand to be idle. He also hates to be under pressure and so always likes to be early. If I’m given a deadline I’ll work to that but I do my best work under pressure and I know he found that frustrating. My mother Mary’s mediation skills have been put to good use over the course of this project. And then there were the scheduling conflicts like the morning he arrived to pick me up for a walk around Howth Head; it happened to be Valentine’s Day and my boyfriend, just finishing a night shift, had decided to pay me a surprise romantic visit. He hadn’t even made it in the front door before Dad arrived, informing me how great the light was. As it turned out we got some great pictures that morning in Howth!

I’m really proud of the final book we have produced and am really excited to see how it will be received.
Dublin Bay, City By the Sea by Sean and Niamh Kennedy is published by the O’Brien Press, obrien.ie