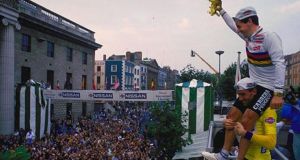 There comes a stage not long into The Ascent when it’s hard to know which rider has taken the wheel for the other; Sean Kelly for Stephen Roche, or Stephen Roche for Sean Kelly. And their rivalry, as much as their shared talent, is their driving force.

The story behind their rise as two of the greatest cyclists of their generation has been told before (Kelly has two authorised biographies, Roche three), only The Ascent tells them in sync for the first time. Cork cycling journalist Barry Ryan also provides a deep insight into the troubled Irish cycling culture from which they rose. At 385 pages and 23 chapters it is a suitable tour de force.

Ryan also provides a closer look at that Kelly-Roche rivalry, typically perceived as gracious when it was often the opposite. He also makes it clear both riders rose despite their circumstances, not because of them, defying plenty of odds and language barriers and the then shambolic political state of Irish cycling.

From this environment Kelly emerged first. Born in Curraghduff, about three and a half miles outside Carrick-on-Suir, he finished school at 13, was preparing for a life of hard work on the family farm, when his brother Joe introduced him to cycling. Within three years Kelly was junior champion of Ireland, still young enough to defend that title for a further two years.

He then began training with senior rider Tony Ryan in Carrick-on-Suir, who’d punish his young protégé on long and severe spins around the Comeragh Mountains, after which an exhausted Kelly would tell him he had to milk the cows as soon as he got home. Ryan would often wonder to himself how far Kelly could be pushed before he would cry “no more”. But each day he returned for more training.

Indeed this sort of punishment – or majorly suffering, as Kelly himself liked to say – features throughout the book, Ryan making it clear the glamour of pro cycling is nothing compared to its brutal hardiness.

In the 1975 Tour of Ireland, Kelly rode the Gap of Mamore in Donegal, described at the time as “one of the finest exhibitions of solo climbing ever produced in this country”, in what was considered an impossibly high gear.

Ryan talks with all the central characters in Irish cycling – including Kelly, Roche, cyclist-turned-journalist Paul Kimmage, and David Walsh – and there’s an early acknowledgment from Kimmage that Kelly certainly had something extra as a rider that he didn’t: after that 1975 tour, his father Christy Kimmage, himself a former rider of considerable repute, then serving Irish team masseur, invited Kelly back to their house. “Dad would have thought this guy was fucking tough, and different to what we’d got,” says Kimmage.

Banned from the 1976 Olympics for his unsanctioned cycling venture to South Africa the previous October, Kelly then fast-tracked his ambitions to make a mark on the French amateur scene, his eventual string of victories that season – 18 in total – not going unnoticed.

Around the same time Roche began his rise from the suburban Dublin village of Dundrum. Aged 19, he became the youngest ever winner of the Ras, which earned him a rookie contract in France. Here his brutal determination is also revealed, Roche spending his first night in France sleeping in the doorway of this team ACBB’s headquarters.

“I wouldn’t give the Irish cycling community the pleasure of seeing me come home with an empty bag,” he says.

In the 1981 Paris-Nice, still 21, Roche found himself dangerously underdressed for the descent off Mont Ventoux; he pulled up the team car and asked for an extra jersey, only to be told he’d get one once he caught the leaders. “I nearly broke my neck trying to get back on...”. Roche rode on for victory, the first ever first-season pro to win the race.

Now rising simultaneously, both Kelly and Roche appeared on the Late Late Show in January 1982, hosted by Gay Byrne, Roche being presented as the stronger light: again, in public, Kelly said nothing; in private he was seething.

“I was the guy who was out there and was performing, and then Roche rocks up and he wins Paris-Nice and he wins Tour of Corsica and a few races... when there’s somebody pushing in there and getting the exposure, that does definitely make you work harder, and y say to yourself ‘I have got to get butt out of the saddle’”.

Kelly went from sprinter to classic all-rounder in 1983, while Roche’s career, more than once hampered by injury, hit the zenith of 1987. At the 1987 World Championships in Villach, along Austria’s southern border, a five-man Irish team – with no manager – took on the cycling superpowers and beat them all. The plan was to support Kelly, built for a course like Villach, only it was Roche – having already won the Tour de France to go with his Giro d’Italia – who stole the show.

Roche held off Italy’s defending champion Moreno Argentin by a single second, and for the first time since Eddy Merckx in 1974 – and the only time since – a rider had won the Triple Crown of cycling. Kelly rolled across the line in fifth, still among the greatest days in the history of Irish sport.

Why this achievement isn’t hailed so instantly 30 years later isn’t so straightforward, and where The Ascent quickly gathers pace on the subject of doping. Ryan, a reporter with cyclingnews.com since 2010, is already known for raising the issue of doping with Team Sky principal Dave Brailsford (who responded by banning him from Sky’s media event on the second rest day of this year’s Tour, reportedly accusing Ryan of “writing shit” and to “stick it up your arse.”)

Ryan raises plenty of such questions in the closing chapters, and towards the end it reads more like the descent of Irish cycling – especially the legacy of Kelly and Roche. What exactly happed at the 1984 Paris-Brussels, where Kelly later tested positive for the amphetamine-based product, Stimul?

And why – long after Roche’s 1987 Giro showdown with Roberto Visintini, or the time he lost and regained at La Plange at that year’s Tour – do questions still remain about his association with Prof Francesco Conconi, and the mountain of evidence he’d doped former riders at the Carrera team, including Roche.

The Ascent doesn’t provide all the answers, but does provide some important truths behind this glorious rise of Irish cycling.