The Border by Diarmaid Ferriter review: Laying it on the line 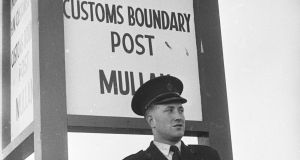 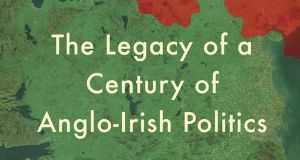 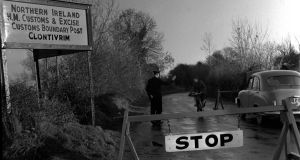 The customs post at Clontivrim, on the Northern side, not far from Clones, in 1955. Photograph: Popperfoto/Getty Images

Book Title:
The Border: The Legacy of a Century of Anglo-Irish Politics

Proving Dr Samuel Johnson’s observation that nothing concentrates the mind better than the prospect of being hanged in a fortnight, Brexit has attracted more sustained attention to our Border than it has ever had since it stumbled into being almost a century ago.

Following on from the fateful British vote of June 23rd, 2016, we have driven, flown and walked over, along and around our Border. As a consequence, that almost forgotten frontier has emerged from virtual invisibility into the glaring light of its imminent elevation from backwater boundary to the only land interface between the European Union and the United Kingdom.

We know more about it now than most ever cared to find out in all the decades it languished in obscurity, disturbed only by an occasional polemic, a cack-handed incursion or dumped corpse, and all those tales of smuggling derring-do.

We have counted, charted and even illustrated in graphic detail all its crossings; quantified road traffic and commercial trade in both directions; analysed its legacy of permutations and mutations down the decades; and we’ve even personified its imaginary musings in an ingenious and hilarious Twitter account (@BorderIrish).

Yet the Border that transmogrified from an economic and security blockade into a porous presence still stands firm against all the handy “solutions” that would allow the UK to make its way out of the European Union without crossing any of prime minister Theresa May’s red lines.

As the story continues to unfold, with the hard-fought withdrawal agreement jettisoned once more by the “mother of parliaments”, we have an invaluable new addition to the growing canon of Border literature. Diarmaid Ferriter’s The Border: The Legacy of a Century of Anglo-Irish Politics provides the bare-bones facts of the historical sequence that has led us to the current impasse.

In essence, this is a litany of duplicity, improvisation, obfuscation, bungling, misconception, subterfuge, delusions, denial and delay. Over the decades, these elements have combined to create and maintain as permanent what was originally conceived, devised and established as a temporary arrangement.

Yet this Border business didn’t go to plan from the very beginning. From the wily Welsh wizardry of David Lloyd-George through the insecurity of Ramsay MacDonald and the machinations of Winston Churchill, the British government’s expected sequence of events to reunify Ireland under Home Rule, yet firmly within the Commonwealth, came unstuck.

Irish statesmen were no less self-serving and blind when it came to copper-fastening partition. Although Ferriter does not allude to Sinn Féin’s ill-advised and counterproductive Belfast Boycott (1920-21), nor WT Cosgrave’s unilateral imposition of customs and tariffs in 1923, he deals deftly with the “hostages to fortune” left in the Anglo-Irish Treaty. They caused the Dáil’s executive president (taoiseach) to rush to London in December 1925 after the Morning Post newspaper leaked details from the long-awaited report of the Boundary Commission. Cosgrave came back boasting that a cobbled-together deal that left the Border as it was “and as it remains today” was a “damned good bargain”.

Then the obdurate refusal of Éamon de Valera to engage with, or even recognise, Ulster unionism only succeeded in kicking the can down the road. Ferriter describes Dev’s approach as “consistent and shallowly stubborn” in his insistence that partition was imposed and could only be undone by Britain, essentially a policy of “do nothing”. His protectionist measures exacerbated the divide, not least the Control of Manufactures Acts, which prevented Northern firms opening factories in the South.

In the face of such ineptitude, the unionist governments of James Craig, John Andrews and Lord Brookeborough got on with the business of a “Protestant parliament and a Protestant state”.

So ignored by Westminster, jealously guarded by Stormont and shunned by Dublin, the Border survived an economic war, the second World War and decades of bitter and bloody internecine warfare.

As detailed in the chapter Old Fantasies, New Perspectives and a Gentle Thaw, rare chinks of light penetrated the murky shadows of Stormont and its treatment of the minority in the early 1960s. These were glossed over, however, in the interests of a promised rapprochement, largely due to the work of two private secretaries, TK Whitaker for taoiseach Seán Lemass, given due credit in the book, and James Young Malley for premier Terence O’Neill, who is not. Yet even their initiative was snuffed out by politicians who wrangled and wrestled their way through another few decades of turmoil.

Over it all, the dead-weight hand of Westminster was stirred only occasionally as the North fell apart at the seams, which usually coincided with its Border. Yet finally with the 1998 Belfast Agreement, a way was found out of the morass and peace came “dropping slow”. The line was blurred as ordinary people found common cause as Irish neighbours within the European Union. For Ferriter the apotheosis was the observation of the French sports newspaper L’Équipe of the “cathartic sense of peaceful and supportive co-existence between northern and southern fans” supporting Irish teams at the 2016 European soccer championships in France. Ferriter adds, “And then, a day later, came the Brexit vote.”

The final chapter – Brexit, Backstops and Brinkmanship – might well have been written of this week’s debacle for one of Ferriter’s Irish Times columns. And while one might differ from his interpretation of some episodes, they are as grounded in contemporary historical fact as the rest of this very readable book.

Two minor quibbles, neither the fault of the author. The index conflates William T Cosgrave with his son Liam Cosgrave, both taoisigh but almost half a century apart. And the red hue on the cover image from Nasa to differentiate Northern Ireland has consumed half of Inishowen and the Cooley peninsula.

The Border has a chronological precision one expects from a historian, yet its pacy and concise narrative runs to just 144 pages and takes readers up to last week’s headlines. One can’t help wondering if it has the immediacy of a background executive summary for the next round of on-off Brexit negotiations.

Darach MacDonald is author of Hard Border: Walking through a Century of Partition (New Island, 2018)

Diarmaid Ferriter will be discussing The Border with Nuala O’Connor & Eoin McNamee at the Mountains to Sea DLR Book Festival on March 31st. Booking on mountainstosea.ie