Dracula may not be a true Northsider, but his character was certainly conceived there

Bram Stoker was a native of Dublin’s north inner city, which is why it runs in Dracula’s blood 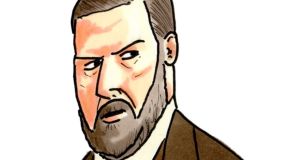 The Dracula character has an international recognition on a par with Coca Cola or McDonalds. However, its creator, Irishman Bram Stoker, is less known with few hard facts about his early life available. This is despite writing 12 novels, short stories, and fairy tales.

His parents, Abraham, a civil servant at Dublin Castle, and Charlotte, married in 1844 with Bram born at Clontarf three years later. After 10 years of moving around Dublin’s northern countryside, the Stokers returned to live at 17 Upper Buckingham Street in the heart of the city. Then, this was still an elegant street which joined the developments of Summerhill with Gloucester Street at the impressive Aldborough House, the last great Dublin mansion of the Georgian era.

This was a place steeped in Gothic tradition with ghostly apparitions, sightings of phantom body parts, and strange, unexplainable events being reported in many of its houses. A grisly murder is said to have been the source of the supernatural limbs. In addition, several suicides and numerous slayings add to the traditional list of prime candidates to return as vampires.

Within sight of the Stoker home was Mud Island, a smugglers’ lair which operated as an independent kingdom for nearly two centuries and whose gothic heritage provided source material for Stoker’s works such as The Watter’s Mou and The Red Stockade. Its banshee folklore influenced stories such as The Castle of the King and The Angels of the Portal.

The area’s ghostly figures such as Art Granger and The Soul Gatherer are clearly part of the DNA of the book. The suicide burial plot at nearby Clonliffe Road is said to have been another influence. In the 18th and early 19th century, people who took their own lives were buried at this unconsecrated site, alongside highwaymen and robbers. Legend had it that they would roam the earth as vampires unless a wooden stake, sharpened at one end, was driven through the corpse’s heart. It is highly likely that this is how Stoker was introduced to the concept of killing Dracula with a wooden stake. Whether true or not, it certainly seems to have been the prototype for the “undead” suicide graveyard in Dracula’s Guest. No one has ever built on the suicide plot which today is dominated by advertising hoardings. A rich tradition of ghostly appearances associated with it remains in the district.

During the Stokers’ tenure in Buckingham Street, a man called Pat Conway, who lived on Stoker’s route to school, took his own life, providing the platform for the narrative of Stoker’s first novel, The Primrose Path. Conway is said to have returned from the dead soon after, causing pedestrians to run quickly past the house or to stop inquisitively when on the other side of the road in search of a glimpse of the ghostly apparition. His last appearance was during the demolition of what were known as the Hutton Houses in 1966, attracting large crowds as Conway ran through the building terrifying workmen while onlookers waved crucifixes and candles in his direction.

Perhaps the single greatest influence on the young Bram Stoker was the nearby Aldborough House. It was built between 1792 and 1800 as a statement townhouse which would drive an upmarket development in the North Inner City. Edward Stratford, 2nd Earl of Aldborough, died in 1801 so the property remained unoccupied and largely unloved. Later it was used as a school, but its impressive classical statues were removed as “not decent” and hidden away in a basement. Over the years the building’s history was lost and tall tales about Bluebeard’s Chamber developed around it and its statues. Bluebeard had married seven times and murdered his wives in a basement by bleeding them to death.

Aldborough provides the prototype for Scarp in Chain of Destiny and continues in short stories such as The Castle of the Kings. The atmosphere of Aldborough was embedded on Stoker’s consciousness and it runs through every large house and castle in Stoker’s writings. While Aldborough is not Dracula’s Castle, it can be claimed to be part of its foundation stones.

An Irish reviewer recalled seeing children held spellbound by Stoker as he weaved extraordinary tales from an endless fountain of imagination. From early childhood, Stoker had been collecting these foundation blocks, all banked until required.

Dracula may not be a true Northsider, but his character was certainly conceived there and is rooted in its many folktales. Dracula is complex and impossible to simply assign to a single source or location. But the North Inner City runs throughout his DNA.
The Big Scream Halloween Community Festival is launched today and it will run until October 31st. bigscream.ie