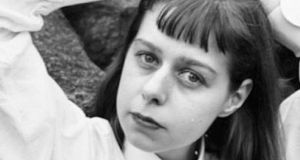 Carson McCullers in her younger years

The American writer Carson McCullers, the centenary of whose birth occurred last year, made a trip to Galway in March 1967, five months before she died. Given the poor state of her health, it was an unlikely undertaking. But she was determined to visit the film director John Huston at his estate, St Clerans, near Loughrea. And Huston, who had just the year before adapted McCullers’s novel, Reflections in a Golden Eye, was willing to attempt to make of a manifest logistical nightmare, a magical and restorative holiday to remember.

Huston brought on board the Loughrea GP Martin Dyar (this reviewer’s grandfather and namesake), who in advance of the trip received a detailed history from one of McCullers’s doctors in New York. There were numerous complications and risk factors, stemming for the most part from undiagnosed rheumatic fever in the patient’s childhood.

McCullers had had several strokes, and she’d experienced recurrent pneumonia. She’d had a fall three years before which had caused a broken hip. She was paralysed down her left side, and she had an emaciated appearance. There were questions too around alcohol, and, despite the best counsel of her carers, she was an immoderate smoker.

But the same letter included a reassurance that the patient was alert and co-operative, and it was signed off with a note of idealism. The St Clerans adventure would surely lead to a boost in McCullers’s writing: “The contemplation of this trip is assuming the proportions of one of the great moments in her life.”

To mark her fiftieth birthday and, on doctor’s orders, as a test run for Galway, McCullers spent a week in the Plaza Hotel in New York. Sure enough, this seemed to improve her energies and her confidence. At the Plaza, she told a journalist that she had at least two more book projects in mind. An autobiography, intended partly as a writer’s handbook on the complexities of inspiration and the double-edged sword of early success; and an exploration of the experiences of artists and performers who, like herself, had continued to work in the face of illness and adversity. She was at the time thinking a lot about the amputees Sarah Bernhardt and Cole Porter, and her working title was In Spite Of.

These two books would not be written, per se; McCullers lacked the energy now. But they were, on her return from Ireland, painstakingly dictated as a kind of amalgam text to what Carlos L Dews, the editor of Poems Plays and Other Writings (and a former director of the Carson McCullers Centre at Columbus State University) refers to as a corps of friends and assistants.

The result was a manuscript called Illumination and Night Glare, first brought to light by Dews in 1999, and reproduced again here. Despite its origins, Illumination is readable and indirectly beautiful. Along with the profound essay McCullers wrote as an outline of her first novel, the enduringly popular The Heart is a Lonely Hunter, it provides a wealth of happy riddles and glosses for the McCullers enthusiast.

McCullers’s undoubtable courage seems to have been partly based on a form of muse complex. Severe health upsets could strike at any time, imposing sudden moratoria on her imagination, and then she’d be sentenced to the night glare, waiting for words and images, sometimes for years. But time and again she found that she needn’t recover fully in order for her mind and her work, if not always her physical self, to be redeemed by illumination.

In this beautiful volume, no mere second fiddle to the Complete Novels (published in the same series back in 2001), the lasting fruit of that vacillating luck and gritty perseverance is very much in evidence.

The play adaptation of The Member of the Wedding is a wonderful thing, a kind of alchemical advancement of the classic novel of the same name. The project came about in 1946 when Tennessee Williams, electrified by the book, offered friendship and mentorship; he even went so far as to hothouse McCullers in Nantucket while she worked on the first draft. Illness interrupted the play, and threatened its prospects, but it was finally completed and staged to great acclaim, running for five hundred and one performances on Broadway, and bringing McCullers the biggest commercial success of her career.

Stories like A Tree. A Rock. A Cloud and The Sojourner assume here a final and much deserved canonical status. The former is a quietly visceral account of a half-drunk man explaining to a boy in an all-night café his means of transforming the regret he carries as a result of a lost love, namely, a quasi-religious system of meditation. The nouns in the story’s title have a kind of rosary function, a heart’s means of counting on the very presence of the world in the absence of understanding. In Illumination, McCullers recalls how the story came to her: “after a long period of illness, in which I’d actually picked up a stone, looked at a tree, and suddenly the magic illumination came.”

In The Sojourner, John Ferris, an expatriate returned to the States from Paris for his father’s funeral, spends an aimless last day in New York, killing time before flying back to France to be with his new partner and her son. Randomly, he sees his ex-wife on Fifth Avenue and follows her for a time, each step a provocation to memory. McCullers is on a thematic home ground of yearning here: “He could not understand the wild quiver of his heart, nor the following sense of recklessness and grace that lingered after she was gone . . .He knew only that his clouded heart was oddly dissonant with the sunny, autumn day.” It has been eight years, and the separation is remembered as traumatic, but Ferris quickly yields to poignancy and phones his ex-wife, who invites him to her apartment for dinner. The intermittent gusts of self-doubt and self-knowledge that are worked into the awkward visit, the energy and the lies that Ferris musters when regaling his ex-wife and her new husband, the effects of the encounter, and the burnished efficiency of the telling, are McCullers at her unbeatably probing best.

There is genius in the imagery and in the cool syntax of McCullers’s poetry. When negativity eats into unity, there’s still a lovely finished strangeness to the writing. But she revered the form more than she was possessed by it, and seems to have approached poems more as comforts than as instruments of expression. Her book of poems for children, Sweet as Pickle, Clean as a Pig, has not been included.

If not quite restorative, McCullers’s time in Galway brought her joy. Though bedbound, she was immersed in a kind of retreated Hollywood extravagance, in a fantasy of Irish country living, in visits and kindness and talk. Memories of her time in lesser splendour with the novelist Elizabeth Bowen in Cork years before, and her love of Joyce and Beckett, helped to bolster the dreamscape, and enhance what Terence de Vere White, interviewing her at her bedside for The Irish Times, thought “an expedition of almost reckless courage.”

The following month, when she was back in New York, Huston urged McCullers to be brave and go through with a proposed leg amputation. He tried to boost her spirits by telling her that their shared horse, Busted, had won another race, with a £50 prize. Dr Dyar sent his own good wishes, and remarked on his patient’s accepting nature: “She is still very much captain of her soul.” The prospect of creating a “phantom”, he advised, was in this case no grounds for fear.

Martin Dyar is the author of the Piggott Prize shortlisted poetry collection ‘Maiden Names’ (Arlen House). He holds the 2018 Arts Council writer in residence fellowship at the University of Limerick