In Praise of Older Books: Primary Colors by Anonymous (1996) 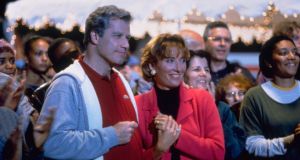 “The handshake is the threshold act, the beginning of politics,” says Henry Burton, campaign manager for Governor Jack Stanton, presidential candidate in waiting, and the maypole around which the novel Primary Colors dances.

The book, whose author is still officially anonymous but was revealed soon after its publication, in 1996, to be the American newspaper columnist Joe Klein, is the ultimate manual on how to run a political race, warts and all.

Stanton and his wife, Susan, are a power couple. He is charming, emotional, lecherous. She is clever, cool, committed. (Any similarities to Bill Clinton and his wife, Hillary, are entirely uncoincidental; John Travolta and Emma Thompson look rather like them in Mike Nichols’s film of the book, from 1998.)

Henry, chosen, he suspects, because he’s mixed race and the grandson of a renowned civil-rights leader, is initially sceptical. But he too falls for Jack. And that handshake. “He’ll share a laugh or a secret then – a light secret, not a real one – flattering you with the illusion of conspiracy . . . He’ll flash that famous misty look of his. And he will mean it.”

What Stanton means, in political terms, is never particularly clear. He wants power. He wants to be the candidate. He wants to win. And, all around him, Henry, Susan and his other disciples want it too. So how far will they go to destroy his rivals?

This is the nub of the story. Forget Susan’s hairdresser, Cashmere McLeod, with whom Jack “allegedly” had a dalliance. Forget Loretta McCollister, the teenager “allegedly” pregnant with Jack’s child. But don’t forget Libby’s test. Libby Holden, friend, political genius, “a manic, six-foot, 250-pound lesbian who knew where all the bodies were buried”. With scruples, ethics and morals to boot. Governor Freddy Picker, Stanton’s nearest rival, is gaining ground, sneaking up the back straight. Until Libby finds out. Cocaine addiction, gay sex. Something to destroy him. But will they use it? “THIS IS A TEST . . . The question is, what are Jack and Susan going to DO with it?” Will they reveal who they really are?

Twenty-sixteen: Donald Trump versus Hillary Clinton. Handshakes abound. But did either candidate pass Libby’s test? Does anyone care? Primary Colors shows us: fail to care at your peril.