Plus: an agreeably quirky Roman murder mystery; and an appearance by Arthur Conan Doyle 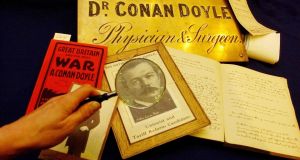 Stephen King’s The Outsider (Hodder & Stoughton, €17.99) opens with little league baseball coach Terry Maitland being arrested for the brutal murder of 11-year-old Frank Peterson. With Terry positively identified by a number of witnesses who saw him in blood-spattered clothing, his DNA and fingerprints all over the victim and the murder weapon, Det Ralph Anderson believes it an open-and-shut case. Trouble is, Terry has a rock-solid alibi – he was 70 miles away at the time of the murder, asking crime writer Harlan Coben a question during a filmed Q&A. The first half of The Outsider sets up an intriguing variation on the classic locked-room puzzler of the mystery genre’s golden age (Agatha Christie is referenced on a number of occasions), but soon King is also referencing Edgar Allan Poe (“The professor said people had the mistaken idea that Poe wrote fantastic stories about the supernatural, when in fact he wrote realistic stories about abnormal psychology”) and reminding the reader that Arthur Conan Doyle, the creator of the logic-championing Sherlock Holmes, was himself influenced by the supernatural. The concluding half of the novel is less persuasive as a crime novel than its opening, as King draws his inspiration from the realms of horror fiction and gothic mythology, although the tale as a whole is never less than deliciously readable.

Henrietta McKervey’s third novel, Violet Hill (Hachette Books Ireland, €16.99) also features Arthur Conan Doyle, who turns up in an investigation into spiritualism, fraud and fakery being conducted by the eponymous heroine, a private detective working London’s mean streets in the immediate wake of the first World War. Meanwhile, in a parallel contemporary narrative, Susanna is a London Metropolitan Police “super-recogniser” with a phenomenal memory for faces who finds herself at a loose end while recuperating from a work-related injury. As she explores the history of the Victorian house where she and her boyfriend live, Susanna stumbles across a long-buried investigation that the reader already knows is haunting Violet Hill … McKervey is brilliant at evoking the sights and sounds of Edwardian London, and is particularly good when it comes to conveying the disorienting sense of an entire nation struck numb by the catastrophic losses on the Western Front. Despite sympathising with those who find themselves haunting the realms of the supernatural in desperate search of comfort, Violet pursues her relentlessly logical pursuit of explanations and answers, even if she is ultimately forced to conclude that “facts don’t create truth, they shadow it”.

When an old woman is shot dead in her New York apartment on the floor below his, coke dealer Jack Price takes steps to inform anyone attempting to mess with his business that Jack Price is The Price You Pay (Serpent’s Tail, €13.99). Aidan Truhen’s debut – the name is a pseudonym of “a writer gone Awol”, apparently – is a parody of the “one-man army” thriller, as Jack, discovering he has been targeted by an assassination outfit called the Seven Demons, cuts loose and wreaks a terrible revenge. It’s all wildly over the top, such as when Jack takes out a Finnish torture specialist during a performance marriage proposal by using liquid nitrogen sprayed from a wedding confetti drone, but while it’s impossible to take seriously, it is terrific fun – Jack is a good-naturedly irreverent cynic when it comes to truth, honesty, morality et al, the story progressing by way of a rambling, illiterate and largely unpunctuated shaggy dog tale.

Memento Mori (Bloomsbury, €12.99), Ruth Downie’s eighth novel to feature the Roman empire sleuth Gaius Petreius Ruso, opens in Aquae Sulis – modern Bath – with the discovery of a young woman, Serena, drowned in the spring sacred to Minerva. Serena’s father, the retired centurion Pertinax, believes she was murdered by her husband, Ruso’s friend Valens, but Ruso discovers that a number of the respectable citizens of Aquae Sulis could well have been responsible for Serena’s death. Set against the backdrop of the tourist-friendly town, with various interests seeking to benefit from the expansion of Aquae Sulis as Romans and Britons visit the health-giving waters in ever-growing numbers, Memento Mori offers a vivid depiction of a bustling spa full of soldiers and priestesses, hucksters and charlatans, slaves and noblemen. As always with a Ruth Downie novel, one of the chief pleasures is the relationship between Ruso, a Roman medicus, and his Briton wife, Tilla – as a medicus, Ruso is obliged to pour scorn on the love potions, curses and magic spells that proliferate in Aquae Sulis, while Tilla is far more open-minded when it comes to all things mystical and supernatural. Funny, smart and agreeably quirky, Memento Mori confirms Downie’s reputation as one of the genre’s finest historical crime novelists.

The President Is Missing by Bill Clinton and James Patterson (Century, €13.99) opens with President Jonathan Duncan informing a House Select Committee that the United States is confronted with “a threat like none we’ve ever faced”. Duncan, however, as one of the very few people aware of a doomsday scenario dubbed Dark Ages and concocted by “an all-star team of cyberterrorists” determined to “reboot the world”, is in no position to reveal the truth to the American people. With the clock ticking down, and a traitor at large in the White House, Duncan goes off the grid as he races against time to prevent an apocalyptic meltdown. An ex-Special Forces US president who isn’t shy about using a Glock is something of a novel concept, and the tale benefits from nuggets of White House local knowledge (“Finally we reach the subbasement, where there’s a one-lane bowling alley, a bunkerlike but well-furnished operations centre that Dick Cheney occupied after 9/11 …”), but for the most part The President Is Missing is a briskly paced but unremarkable high-concept thriller.