The Butcher’s Daughter review: a compelling tale from Tudor England

‘With the dissolution of the monasteries the nuns were cast adrift’ 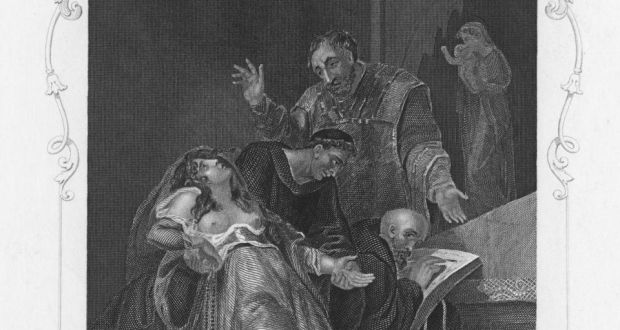 The imposture of the Holy Maid of Kent, a depiction of Elizabeth Barton, (1506-1534) receiving a prophesy while in a trance, circa 1534. Barton was an English Catholic nun, known as the ‘Maid of Kent’. She was executed as a result of her prophecy that the marriage of King Henry VIII to Anne Boleyn would lead to Henry’s death. Engraving by J Rogers after a painting by A Tresham Photograph: Kean Collection/Getty Images

Victoria Glendinning is best known as the multiaward winning biographer of such literary icons as Vita Sackville West, Anthony Trollope, Elizabeth Bowen and Leonard Woolf. There are several reasons for her enormous success in the biographical genre; her scholarship is impeccable, her unsentimental empathy for her subjects is palpable on the page and she vividly brings to life the era in which each of her subjects lived.

Her ability to be absorbed by the minutiae of previous ages – the gloves people wore, the lace that encircled their necks, the views from their windows – is almost an act of conjuring. We, her readers, are there with her and with her subjects. We know the smell of their skin and can taste the dust on their roads.

Glendinning brings all of these admirable skills with her to her latest creation, a work of literary fiction entitled The Butcher’s Daughter which is set in the Tudor era during the dissolution (by Henry VIII) of the English Catholic monasteries and abbeys. We have all been fascinated by this epoch; Henry VIII and his various lusts and beheaded wives are enough to infatuate us for another couple of millennia, even without the brilliant literary work of Hillary Mantel, which, with its focus on Thomas Cromwell and Henry VIII, has increased our infatuation to the point of obsession.

But Glendinning has done something entirely different. She has taken a young woman from one of the struggling classes and examined her life, and her feelings about life, during that troubled time. After reading this book I became very aware that, even if you don’t go looking for politics, that won’t stop politics from marching up and knocking on your door.

Which is exactly what happens to Agnes Peppin, Glendinning’s young protagonist from the West Country. Although she did not receive the annunciation of a vocation, Agnes nevertheless joins the sisterhood of Shaftesbury Abbey after giving birth to an illegitimate child. This is not an altogether bad thing. Agnes can read and write, as a result of being taught by two young canons in nearby St Mary’s church, and she loves books – or at least the idea of books.

In 1535, not much of a life of the mind would have been available to her outside of the abbey walls. As a result of her literacy, she is made a sort of executive assistant to the Abbess and is therefore witness to all of the opportunistic moves, and desperate measures that precede its demise. It is an entirely believable way of bringing the reader inside the walls of not just the abbey, but the minds of both the perpetrators and the victims of the purge.

One line in a Catholic encyclopaedia made Glendinning want to create Agnes: “With the dissolution of the monasteries the nuns were cast adrift.”

Agnes is the character with whom we become most intimate, but there are other women as well that, through Agnes, we come to know and cannot help but for whom we feel sorry. More than 2,000 nuns were dispatched to an uncertain fate when Henry made his move; this when the population of England hovered at about one million. As always, the men – monks and priests – fared better. It was a difficult time for anyone connected to the Catholic Church, but these unprotected women who watched the only world they knew disappear, were particularly vulnerable.

Glendinning’s rendering of their reaction to the cessation of their community is heartbreaking and unforgettable. In the beginning, when the Abbess makes the terrible news known to her flock, there is just silence. A few days later there is madness and sorrow. Some sisters actually lose their wits altogether, others wail out their terror and disbelief.

What follows in the second half of the book is a by times humorous, by times tragic but always compelling picaresque tale. Agnes meets the love of her life as well as many and various other characters as she follows her particular road. She reunites with other members of the community, some of whom are involved in very interesting and risky trades. And, in the end, she makes a surprising decision.

The distant past always seems to us to have no history of its own. But at the time of its downfall, Shaftesbury Abbey had been in existence since 800 AD and that is more than 700 years! It is one of the many accomplishments of this marvellous book that Glendinning animates the solidity of the abbey, and the landscaper and world that surrounded it, to such authentic and convincing extent, that we can honestly say that we understand the dimensions of it, both physically and emotionally.