The troubled Lucia Joyce gets an intellectually uncompromising fictional biography 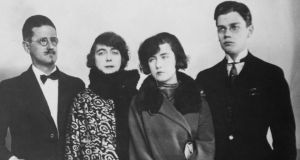 Ripe for mythologisation: Lucia Joyce with her father, James, mother, Nora Barnacle, and brother, Giorgio, in Paris in 1924. Photograph: Archive/Getty

In 1934, at a party held to celebrate the 50th birthday of her father, James, Lucia Joyce picked up a chair and threw it at her mother. Her brother, Giorgio, subsequently escorted her to the sanatorium of Dr Otto Forel in Nyon, Switzerland, and Lucia spent the remaining half-century of her life in various mental-health institutions.

In 1988, at the International James Joyce Symposium, Lucia’s nephew, Stephen Joyce, caused much shock when he announced that he had destroyed all his letters from Lucia Joyce, and had destroyed the correspondence between Lucia and Samuel Beckett at Beckett’s request. Stephen Joyce, who is at the end of the family line and the executor of the Joyce estate, maintains a strict level of privacy about the family papers, and academics who have tried to publish on the Joyce family have often been followed by lawsuits.

A gifted dancer in the bohemian Paris of the 1920s, Lucia is ripe for mythologisation, especially by those prone to sensationalism, because of her mental health, alongside rumours of incest and lesbianism, and the pressure of a litigious estate. The burning of Lucia’s letters, creating an effective gap for speculation, has only added to her allure. In just the past 15 years she has been the subject of numerous novels, including Alan Moore’s Jerusalem (2016) and Annabel Abbs’ The Joyce Girl (2016); a graphic novel, Mary and Bryan Talbot’s Dotter of Her Father’s Eyes (2012); a biography, Carol Loeb Shloss’s Lucia Joyce: To Dance in the Wake (2003); and a play, Sharon Fogarty’s Lucia’s Chapters of Coming Forth by Day (2015).

The novel itself begins with Lucia’s funeral, in Northampton, in 1982, and homes in with an unsettlingly close gaze on her body

With publication set to coincide with Bloomsday today, Alex Pheby’s Lucia treats Lucia with an unusual degree of critical nuance and empathy, setting the standard not only for intellectually uncompromising fictional biography but also for rigorously questioning narrative experiment. Pheby’s second novel, Playthings, published by Galley Beggar, also focused on a true case, this time of Daniel Paul Schreber, a 19th-century German judge who was struck by a sudden onset of paranoid schizophrenia in middle age. In Lucia his engagement with such a controversial history, and such a controversial case of male appropriation, has prompted a searching and fascinating book.

The novel is broken between chapters, or fragments of narrative, by an account of the discovery of an Egyptian tomb, and the funerary rites of ancient Egypt. This unsettling and detached account of the discovery of a female body and its dissection, dismemberment and preparation for the Duat (the Egyptian “realm of the dead”) works as a slant commentary on the ethics of the male gaze, being made even more uncomfortable by the clinical, matter-of-fact manner of the account, in which the body is entirely passive.

The novel itself begins with Lucia’s funeral, in Northampton, in 1982, and homes in with an unsettlingly close gaze on her body: “Lighter. Bony like a bird. Swan. Long neck. Three and six on the box and half a crown on silk. Save on the wood – no reinforcement. Save on the wadding – no need, can’t weigh more than a child – halfway to a skeleton.” This is a stark opening. Lucia is almost absent; she is there but hardly even acknowledged – she is the subject of other people’s lives, their jobs, their gaze but not their empathy.

Lucia also probes at the litigious nature of the Joyce estate. In an early scene, during the infamous burning of the letters, Pheby writes, “There were words in a row, but they were meaningless. How many, he thought, would break the law against reading? What makes meaning?” Pheby’s talent is for prizing open the ethical, literary and philosophical matrix of Lucia’s case and resituating her at the centre of both an emotional and intellectual sympathy.

The novel deals with the rumours of incest, and invents an episode in 1917 in which Giorgio tortures Lucia’s pet rabbit, but then inverts these falsities, with Pheby turning the gaze back on to both the reader and himself. In a remarkable passage the author seems to step into his book and examine both its project and the canon of “Lucia” literature it addresses: “ If one has secrets, and then burns the evidence of those secrets in a pyre, one invites speculation, and speculation is infinite in a way truth is not [. . .] Why shouldn’t Giorgio have tortured Lucia’s rabbit to prevent her from speaking? All things that are possible are, in the absence of facts that have been destroyed that might have proved them incorrect, equally correct.”

An emotionally powerful and constantly questioning novel, Lucia probes speculation, truth and the fraught ethics of history, biography and narrative itself.