I’m a Belfast Protestant but I’m an Irish writer

‘I love coming over the border just to feel the cultural buzz, but am I really regarded by the Southern Irish as Irish?’ 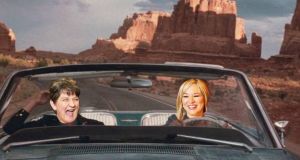 Rapid Response: Michelle and Arlene by Rosemary Jenkinson imagines the North’s Sinn Féin and DUP leaders on a Thelma and Louise-style road trip

I like to call myself an Irish writer but being born a Northern Protestant presents some problems. In those writers’ lists of Brennans, McCanns, O’Connors, a plantation name like Jenkinson sticks out as much as if it were Polish. Even an Ulster Scots name would have been better than one from Ireland’s old enemy, England. My ancestors arrived in Co Armagh from northern England in the early 1600s, like today’s immigrants in search of a better economic life.

I grew up culturally British in east Belfast, moving at 11 to Dundrum, Co Down. I filled my royal family scrapbook as a child and went to the parades on the Twelfth.

It was expected that if you were academic you would go to university on “the mainland”. England to Northern Protestants was the equivalent of America to the Southern Irish – the land of opportunity. All the teachers encouraged us to go. Ironically, I often think that our teachers did a better job of ethnic cleansing a generation of young Protestants in the eighties than the IRA ever did.

I remember, though one day, while I was doing my A-levels, my two friends and I missed our bus from Downpatrick and decided to hop on the Catholic school bus. The boys began booing us and singing The Soldier’s Song. The bus driver was so fearful of what could happen he stopped on a country road and told me and my friends to get off. We made light of it afterwards, but we were glad that we’d all soon be leaving.

When I got to Durham University, my Northern Irish vowels were frequently mimicked. English people also didn’t understand the “slagging”, our way of teasing, and sometimes were offended by it, so I had to modify that. I remember an English girl once saying that I had no right to be in Ireland. “It’s their country, get out of it,” she told me. Of course, the only response was to ask her if she told every immigrant who arrived in England to get out of her country too.

I think the girl’s negative reaction to me is why, unlike the Catholic Irish, Ulster Protestants don’t hold on to their identity when they emigrate. It is weird but our identity is primarily predicated on what we aren’t rather than what we are. It’s also down to the spirit of stoic Presbyterianism that we just get on with things and adapt. I think our settler history makes us believe that settling elsewhere must be easy.

The culture of industry here has always revered a shipyard hammer more than any pen; the DUP would far rather construct buildings than plays

Personally, I didn’t settle well in England at all. After I left university, my parents moved from Dundrum to Berwick-upon-Tweed, a border town that sits uneasily between England and Scotland, so I didn’t feel comfortable there either. I moved about to Dundee, Newcastle-upon-Tyne, Gillingham and Keele, and I kept trying to write over the years but I couldn’t identify with anywhere. That’s why I escaped abroad to teach and, after all that drifting, I knew I had to go back to Belfast.

It was the best feeling to return. It was 2002 and there was peace. I started from scratch as I hadn’t stayed in touch with old friends from school and, in any case, half of them had never come back. When I wrote, my stories felt plugged in to the city’s live wire; there was an electric buzz in the words. My plays were as Irish as a pint of Guinness – froth on top but dark underneath (Arthur Guinness was a Protestant himself). The difficulty in Northern Ireland then, and even more so now, was the lack of arts funding and, while that’s partially down to the British government, it’s also down to the Ulster Protestant ethos. The culture of industry here has always revered a shipyard hammer more than any pen; the DUP would far rather construct buildings than plays.

One thing I really admire about the South is the esteem it has for its writers. However, Ireland has so many great writers I’m surprised it should rely so much on James Joyce in terms of its tourist brand. Joyce and Bloomsday? Sure why not Behan and Boozeday?

Fortunately, most of us barely notice the border now

I love coming over the border just to feel the cultural buzz, but sometimes I do feel a slight awkwardness – in terms of politics, the media I watch, my culture, my experiences, am I really regarded by the Southern Irish as Irish? I recently read at the Dalkey Book Festival at Borders, a great event run by the Keep the Border Open initiative, and I mentioned then that things have changed radically, both north and south. My great-grandfather, Andrew McMullan, was from Cork but due to lack of jobs and discrimination he was forced to move up to Belfast before partition. Fortunately, most of us barely notice the border now, but the past does at least explain the fear in the Northern Protestant psyche at Sinn Féin’s desire for a border poll.

The truth is that Northern Protestants envy how Irish Catholics are loved and accepted throughout the world. I think the new uncertainty of Brexit makes us feel as precarious as an infant in care. We’re like the problem child of Europe, feeling disowned and unloved by England and Ireland, yet at the same time we’re incredibly proud to have survived. It’s impossible to tell if a united Ireland is in the offing. All I can say for sure is that, whatever the case, I’d like to be considered as an Irish writer.

Rosemary Jenkinson is artist-in-residence at the Lyric. Her latest play, Lives in Translation, about Somali asylum seekers, will be produced by Kabosh. A short story appeared in The Glass Shore and an essay will be published later this year in Female Lines by New Island. Rapid Response: Michelle and Arlene will premiere on August 24th at the Accidental Theatre at 12-13 Shaftesbury Square, Belfast