From Ann Lovett to Savita Halappanavar and Katie Taylor, Paula McGrath traces the threads that form the fabric of her new novel 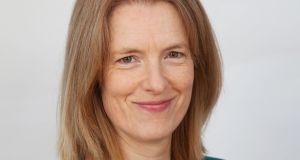 Paula McGrath: The novel-writing process is about this constant play between critical thinking and creative writing, figuring out when to direct and when to take a back-seat. Photograph: Paul Sherwood

A History of Running Away started with a vivid image: a teenage girl, with hair back-combed into a halo of black spikes, pale face, heavy eye make-up, multiple piercings and layers of black clothes. I knew her; she was a school friend who had died in a car crash when we were 17. We were simply devastated, while the adults grieved not just for her death, but for all the possible futures which had died with her, something I did not understand until many years later. I hadn’t thought about her in a long time and when she appeared so clearly to me after all these years I knew that I would have to write one of those possible futures.

This was the summer of 2012 and Katie Taylor was fighting for Olympic gold in London. I was surprised to learn that it was the first time women’s boxing had been included as a category. A quick search revealed that boxing for women had been outlawed until as late as 1999. Taylor’s achievement was all the greater for the progress it represented for women, and seemed to offer reasons for optimism.

While a ban on women’s boxing is a relatively minor restriction, it came from the same source: a State and a Church, top-heavy with men, wanting to control women’s bodies

I knew then that my teenage character would want to box. She would have to run away from her midlands home to do it. And she would be called Jasmine, having decided that her own name, Rosemary, was too ordinary. After all, beyond her physical appearance she was fictional; she could do anything. I wrote the first draft in a couple of fevered months, then put it away while I worked on another project.

A novel is fed by scraps – a conversation overheard, a memory, an object, a book, an historical event, an image, a feeling, a news story, and so on – collected both consciously and unconsciously over the lifetime of the author, overlapping with that of the work in progress. As I was writing the book, two events occurred which, unbeknownst to me, would become part of its fabric: the death of Savita Halappanavar in October 2012, and the 30th anniversary of the death of Ann Lovett in January 2014. When I took the novel out again I knew it would not be one I had imagined.

I went back to the beginning, this time focusing on what Jasmine was running from. An interrogation of her relationship with her mother led me back to the fifties, to mother and baby homes and State-enabled American adoptions, and this opened up the novel. It gave me the characters I needed to proceed: Ali, living in Maryland, who runs away from grandparents she didn’t know she had, and the Dublin-based gynaecologist who struggles to do her job within the constraints of Ireland’s strict abortion laws.

By looking to the past, I could see the direct connection between a society which devised mother and baby homes and the ongoing debate around women’s reproductive rights. Taylor’s Olympic gold and the death of Savita Halappanavar had happened within months of each other but it was only by putting the two events into a wider context that I was able to make sense of the seeming-disparity between them. While a ban on women’s boxing is a relatively minor restriction, it came from the same source: a State and a Church, both top-heavy with men, wanting to control women’s bodies.

While there is no scientific formula to describe the to-ing and fro-ing between conscious and subconscious minds, sometimes the story takes matters into its own hands

The power of fiction lies in the story it tells (whether it’s plot-driven or plot-lite). While there is no scientific formula to describe the to-ing and fro-ing between conscious and subconscious minds, between free-style, trance-like sessions at the keyboard and cold, hard analysis, suffice it to say that sometimes the story takes matters into its own hands. When I reread that first draft, I found that I had included several references to the contentious abortion debate that formed the backdrop to that era. In other words, before it had dawned on me that there were more concerning restrictions on Irish girls in the eighties than the boxing ban, my subconscious had already written it.

The novel-writing process is about this constant play between critical thinking and creative writing, figuring out when to direct and when to take a back-seat. Thus, when a character tries to leave the mother and baby home in which her brother, the school master, has installed her and is escorted back by a Garda to the nuns, it perfectly illustrates Church-State collusion. But it was written without conscious intention on my part. I was not thinking about Church or State, but about my character, who had decided she couldn’t stay there a moment longer.

It could be argued that these characters are merely playing out the parts history has written for them, but as I wrote about a girl who wanted to box when she was not allowed to do so, the story took turns I could not have predicted. The resultant novel follows three women who, at different stages of their lives, each fall foul of the Irish State’s difficult relationship with women’s bodies.
A History of Running Away by Paula McGrath is published by John Murray, at £13.99