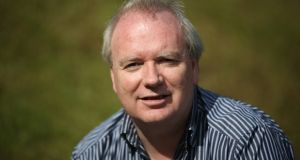 Sean Doran: ‘We hope to see the Northern Literary Lands as something that is adopted by both tourist boards – Tourism NI and Fáilte Ireland – as a joint initiative. Photograph: Daveth Fox

The flow of ideas from Seán Doran and Liam Browne is so fast that it can be hard to keep up, especially when the two of them get excited and start talking at the same time. But then coming up with ideas – and making them happen, in the form of festivals, arts events and more – is what this pair do best.

Doran and Browne are the twin forces that created the Happy Days International Beckett Festival and the Wilde Weekend Festival, both in Enniskillen, as well as the Lughnasa International Friel Festival in Donegal and Derry. Now they are turning their attention to a new initiative, Arts Over Borders, honouring the remarkable literary lineage of Ireland’s 11 Border counties.

Beginning with three of Ireland’s Nobel laureates – Samuel Beckett in Fermanagh, Seamus Heaney in Derry and WB Yeats in Sligo – they trace a broad geographical and chronological sweep across the island, taking in a constellation of major writers along the way, such as Jonathan Swift, Patrick Kavanagh, John McGahern and Brian Friel. These are the Northern Literary Lands, and Doran and Browne have plans for them. They want to present an annual multi-arts summer festival across the Border counties, celebrating the authors’ lives and work and putting these giants of literature back on the map. Ultimately, they envisage a world-class literary cluster, which could attain Unesco World Heritage Status as a designated region of literature.

This is one of the charms of Doran and Browne: they never think small or pedestrian. The dull plod of the touring circuit is anathema to them. Whether it’s bringing Homer’s Odyssey to windswept Donegal beaches, as they will this August as part of the Friel festival, or enacting Dante’s Inferno in the bowels of the Marble Arch Caves in Fermanagh, their vision is always ambitious.

“We do not see it as being ours to own, more as something given over to being shared by everyone including ourselves,” says Doran. “We hope to see the Northern Literary Lands as something that is adopted by both tourist boards – Tourism NI and Fáilte Ireland – as a joint initiative and to stand equal to what the Wild Atlantic Way and Ireland’s Ancient East created for their respective geographic areas.”

Brexit means that it is a timely moment to be examining the meanings of the Border. Seán Doran and Liam Browne want people in the region to unite to celebrate what they have in common rather than focus on what divides them. “Our view is that people living in these regional rural environments have the moral right to access international arts as those living in capital cities, and it takes an intervention of this nature to redress in practical terms the imbalance of access and participation,” they say.

“There has always been a social and cultural fluidity with regard to the Irish Border,” says Browne. “We don’t want to celebrate borders per se but rather the way in which those living in the Border counties have refused to allow the Border to inhibit their lives and relations.

“Derry/Donegal or Fermanagh/Leitrim are examples of counties living on opposite sides of the Border which have a natural closeness and relationship. The politics that desires to enforce and harden borders threatens the social and cultural fabric of the 11 counties of the Northern Literary Lands, which we wish to celebrate through Arts Over Borders.”

Browne describes a “rural interior that just naturally gets forgotten or ignored in our contemporary cultural climate of urban centres and contemporary tourism emphasis on coastlines. It’s about placing some weight on the other side of the scales.”

The pair recently formalised their series of collaborations as DoranBrowne, but have been working together, on and off, since they first met at the Impact festival in Derry in 1992, where they were squeezed together in the same office because of a shortage of desks.

Their connection is intense and intuitive. “It’s completely equal,” says Browne. “One of us has a germ of an idea, and then it gets elaborated in the course of conversation. We have this huge synergy, and there’s not much we disagree on. That sharing of the creative element is a real pleasure, because it can be isolating if you’re working by yourself, especially if your ideas are audacious.”

With the Beckett festival, Doran and Browne used a “bio-fest” model. Every event has to lead back to the artist’s life and work, even when the connection might seem obscure or whimsical. For example, at the opening concert of the first Beckett festival, the Moonlight Sonata was performed twice, in a very particular reference to the “same again” of Acts 1 and 2 of Waiting for Godot. Another aspect of the bio-fest model is that it is rooted in place; the geographical location of the festival is as important as the content, or rather the two are so interwoven as to be indistinguishable.

DoranBrowne’s special way of doing things caught the eye of Liverpool City Council chiefs, who were contemplating how they were going to mark the 50th anniversary of the Beatles’ Sgt Pepper’s Lonely Hearts Club Band album. “They didn’t want to end up with just another nostalgic music festival. They liked the unlikeliness of what we were doing with Beckett. So we put a proposal together,” says Doran. The result was Sgt Pepper at 50: Heading for Home, recently performed in Liverpool.

Taking the album itself as their source, DoranBrowne curated a programme of 13 commissions in response to the 13 tracks on the record (they included Strawberry Fields and Penny Lane, which were originally on the track-list), with performances at unexpected venues such as the Anglican Cathedral and Aintree Racecourse. As Doran says, they used the whole city “as a turntable for the album”.

It seems right that these two men from Derry were chosen to celebrate the Beatles’ most influential album, since the pair have a rather Lennon and McCartney way of working together. No divas themselves, they would no doubt deny the comparison. But the depth of the partnership, and the instinctive, organic way that they collaborate with one another, often leads to similarly surprising results.