Bernard MacLaverty: 'My life has been a seamless piece of laziness, work, and thoughts'

A wintertime trip to Amsterdam in 2001 inspired the Belfast-born writer’s new novel, which took 16 years to finish 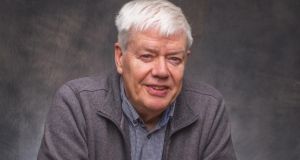 Bernard MacLaverty: “My life has been a seamless piece of laziness, and work, and thoughts, and all the rest of it over the years.” Photograph: Robert Burns

When Bernard MacLaverty answers the phone in his Glasgow house, I can hear a bit of a kerfuffle in the background. Is everything all right, I ask? “Ah, we’re just babysitting my son’s boy,” he says. “He’s a great wee fella. Two and a half. And we’re also babysitting a cat – so it’s a kind of home for strays, today. Strays and weans.”

Glasgow has been home to the Belfast-born writer for more than 30 years. But it was another northern city – Amsterdam – that inspired his new novel, Midwinter Break. The book brings the reader away on a long weekend with a married couple, Gerry and Stella, whose affectionate, bickering banter conceals the potentially catastrophic fault-lines in their relationship.

The story grew out of a trip MacLaverty made to the Dutch capital in the winter of 2001. “I had stumbled into this place in the centre of Amsterdam and was astonished by its silence and intimacy,” he recalls. He had discovered the Begijnhof, a medieval courtyard that once housed a community of lay religious women. “All the houses were pulled up like wagons in a circle. It just had a wonderful feeling. It’s a kind of intangible aura that surrounds the place. In the novel, Stella is much taken with it – as much as Gerry is taken with getting himself a drink.”

It’s interesting that Midwinter Break has its genesis in 2001, because that’s when MacLaverty’s previous novel, The Anatomy School, was published. I’m trying to think of a polite way to raise the subject of the 16-year hiatus when he brings it up himself.

“My life has been a seamless piece of laziness, and work, and thoughts, and all the rest of it over the years,” he says. “When somebody asks me, ‘What have you been doing for 16 years?’ I would say: ‘A whole lot of things that have not appeared for journalists’ inspection.’ There have been eight grandchildren, who all joyfully live in the same postcode in Glasgow, and who come for meals and visits. This is a kind of central place. It’s a good place. That is important to me.

“And there have been other things that have happened. Creative things. I’ve written opera libretti; that was something that was completely new to me.”

MacLaverty doesn’t mention that he was nominated for a Bafta best short film – and won the best first director award from Bafta Scotland – for Bye-Child, his adaptation of a poem by Seamus Heaney. Nor does he bring up the witty “doodles”, many of them created on his iPad, which grace his website, bernardmaclaverty.com. He does, though, recall his delight at being invited to host a two-hour programme on Radio Scotland every Sunday, playing music, talking to fellow writers and musicians and . . . well, just talking, really.

“I became a classical DJ,” he says. “A very oblique kind of DJ, mind you. When you listen to BBC Radio Three and stations like that, they tell pieces of informations about Mozart, and Beethoven’s string quartets, and this that and the other.

“But I told them about my grandmother, and how she fled Belfast during the war and lived in the countryside, and she had a wee banty hen. It used to go up and down the stairs every morning. There was lino on the stairs, so she could hear its wee feet scrabbling, and it would come down – and it would have laid an egg in her bed. I would tell them that; and then I would play Haydn’s The Hen symphony.”

Just as his grandmother fled Belfast during one war, so MacLaverty fled during another. The horrors perpetrated in the North during the Troubles have always haunted his fiction; but Scotland has provided both a refuge and a sense of perspective. “When I left the North, what politics meant to me then was the Orange and Green thing. To live in Scotland added a completely new dimension of left and right. I met people who had working-class, anti-conservative attitudes and theories and philosophies. I found that very refreshing and stimulating.”

Scotland, of course, is not a monolithic place. “To live in Glasgow is, in many ways, to live among your own. There’s a great long green DNA here – which would not be the case in Edinburgh.”

MacLaverty spent three years in Edinburgh, having landed a teaching job there after graduating from Queen’s in Belfast. “Then one day Madeline had washed the kitchen floor. Now, I don’t know whether anybody else does this or not, but Belfast people used to put down newspapers on a wet floor to absorb the damp.

“I had just come in from school exhausted, and was teetering on a stool in the kitchen. I looked down and there was this job advertised between my feet: head of an English department at the high school on the island of Islay.”

The family spent eight years among the mists of the western isles before returning to the mainland and settling in Glasgow. All the while, MacLaverty was making a name for himself as a writer. His bittersweet tale of two disturbed young men, Lamb, was published in 1980; Cal, his study of sectarian violence, followed in 1983. Both novels were successfully adapted for the big screen: Cal starring Helen Mirren and John Lynch, Lamb with Liam Neeson and Hugh O’Conor.

MacLaverty’s five books of short stories have seen him hailed as a master of the form. When he goes back to writing a novel – Midwinter Break is his fifth, neatly evening up the score – does he have a sense of familiarity with the scale, the rhythm of it, as with a piece of familiar music?

“I think they’re all different,” he says. “At some point I said to an interviewer that writing prose is like building a dry-stone wall – you don’t get better at it. But maybe you do. I don’t know. But I know that the story you just finished is no use whatsoever to the story you’re about to start. It needs to be a unique event. To have a formula is not a good idea: each narrative, each story, is to be approached and told differently.”

Looking back over the years, he adds, he has realised just how different each of his novels is from the next. “Lamb is a very different item to Cal. Then there was the switch of gender to Grace Notes. The Anatomy School was a lot lighter, with elements of comedy and humour in it.”

Midwinter Break is different again – though it’s a difficult novel to talk about, without giving the game away. What can be said is that it feels astonishingly real. As a reader you’re right there in the airport with Gerry and Stella, fuming after the security guy has confiscated your shampoo and conditioner.

Critics have remarked more than once that accuracy is important to him as a writer: how does he achieve it? “It begins, I think, with trying to be accurate about physical details,” he says. “If a reader believes the intimacy and truth of the world described, then they’ll believe in the inner accuracy of what you’re trying to do.

“I’ve been reading a wonderful writer called Elizabeth Strout. In her novel the main character encounters a woman called Sarah Payne, who says that her job as a writer of fiction is to report on the human condition. To tell us who we are and what we think and what we do. I thought that was lovely and clean – and, using the word you used to me, accurate.”

And to allow us to laugh at ourselves as well, perhaps. There’s a scene in Midwinter Break where Gerry gets a night-time cramp, which is as painful as it is comical. I’ve had that cramp. I’m sure many readers have.

“Yes,” MacLaverty agrees. “It comes and goes, doesn’t it? Madeline seems to have great faith in bananas. A banana before bed will cure you of the cramp.”

Midwinter Break by Bernard MacLaverty is published by Jonathan Cape