This historian’s delight is a reviewer’s nightmare 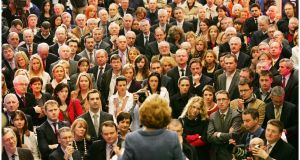 The Cambridge Social History of Modern Ireland should be greeted with rejoicing as a landmark volume in modern Irish historiography. Unfortunately, the historian’s delight is the reviewer’s nightmare. No brief review can do justice to the range and richness of the 33 chapters, some written jointly, by the more than 40 contributors recruited by Profs Biagini and Daly, both themselves contributors, and climaxing in brief but challenging epilogues by Guy Beiner and Eunan O’Halpin on Remembering and Forgetting in Modern Irish History. So rich is the content that the collection will doubtless stimulate the considered responses it deserves in the form of review-articles, for a brief review like this can proffer no more than a tasting menu.

One thing that must immediately be said, however, contrary to the publisher’s description on the very first page, is that this is emphatically not a textbook. On the contrary, it is anything but. That is no disgrace. Good textbooks are rare enough, demanding their own skills of design and composition in order to scale the highest common factor permitted by the genre. But far from being a textbook distilling consensual positions, however skilfully, this is a collection bristling with provocative questions and conclusions, with page after page demanding and challenging agreement or disagreement. As such, it seems safe to predict that it will be long before it is in danger of being superseded.

The editors have chosen their contributors well, blending established, indeed renowned, authorities with exciting younger scholars of a rising generation. Nearly half of them are located outside Ireland – it would be interesting to explore how far location influences perspectives on Irish history, and why – while several, like Kevin Kenny of Boston College, are also widely respected for their global standing on subjects including, but transcending, the Irish experience. Indeed Kenny’s chapter in this volume, Irish Emigrations in a Comparative Perspective should be required reading for anyone interested in emigration – and not only Irish – in global history, showing how illuminating comparative history – so regularly invoked, and so rarely practised – can be in influencing our perspectives. Disciplined comparison can help locate all histories – including of course Irish – in a wider global perspective, relating the unique to the universal and impressing on us that however distinctive the specific modes of expression of individual cultures, human nature shares much in common. But simple though it sounds, it is much easier said than done.

An excellent example of fruitful comparison in this volume is Bronwen Walter’s delicately nuanced account of English, Scottish and Welsh responses to Irish immigrants in locations as distant from one another as Newfoundland and New Zealand. This raises numerous questions about generalisations based on loose assertions about intrinsic Irish “character” or “values” often derived from evidence relating to one place of settlement only, and applied uncritically to the Irish “elsewhere” as if all emigrants were assumed to conform to one standard model. In fact one of the great lessons of the totality of the Irish emigrant experience is how malleable and adaptable Irish personality could turn out to be in changing locations and circumstances – and in that respect, it is very human, contrary to some caricatures.

So much is packed into this volume, readable though it be, that virtually every chapter deserves a separate review, and will doubtless receive it from appropriate specialists. If the reach occasionally exceeds the grasp this is at least partly because the reach is so ambitious that, chapter after chapter, like Gearóid Ó Tuathaigh’s finely calibrated analysis of the fortunes of the Irish language or David Dickson’s magisterial distillation of vast erudition on the history of urban Ireland, could be easily expanded.

There are some odd omissions too – at least if I read correctly – in that, for instance, class does not appear in the index, despite illuminating reflections on the topic in several papers, not least those of Peter Solar and the renowned Joe Ruane/Jennifer Todd partnership. Let me add, while in censorious mood, that the indexing, especially important in so heterogenous a collection, is a shade arbitrary.

Ample scope remains for conceptualising comparison more rigorously in Irish historiography. The editors have assembled a volume of such distinction that it deserves the application of their integrating intelligence to enable it add up to more than the sum of its parts. The editors in fact, having doubtless expended a great deal of time and trouble, in bringing the volume to fruition – as is bound to be the case with such a substantial cast of dispersed contributors – do themselves an injustice in refraining from putting us further in their debt by composing a substantial introductory chapter pondering the meaning of it all, and where we go from here.

When the editors have done wonders in eliciting so many stimulating contributions, it is of course churlish to ask for yet more from the comfort of the reviewer’s chair. But as they are the ones most qualified to deliver it, one might hope that they will elaborate in appropriate manner on their challenging three-page introduction, which certainly deserves ample extension. Their crucial contentions compressed into so pithy a presentation need to be elaborated as arguments rather than obiter dicta conclusions. Otherwise there is a danger that the full value of even so rewarding a volume will not be realised until the editors’ pungent observations on what social history is, and what it is not, are fully elaborated. Who better qualified than they themselves, who have brought this splendid volume to triumphant fruition, to contribute to the reaping of the full harvest?

But that is a sour note on which to end. Rather should the editors be congratulated on the colossal effort that must have been involved in mobilising and guiding so much energy and intelligence to achieve so impressive a product in this major contribution to Irish historiography.

JJ Lee is professor of history and Glucksman professor for Irish studies and director of Glucksman Ireland House, at New York University