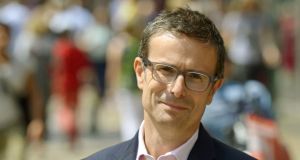 Robert Peston: ITV’s political editor sees the Brexit crisis as a delayed reaction to the recession

Book Title:
WTF: What Have We Done? Why Did It Happen? How Do We Take Back Control?

There’s been a lot of hand wringing in media circles about how metropolitan types missed the twin trains of Trump and Brexit. Robert Peston, political editor of ITV, has added his voice to the throng with his new book. And what a voice it is. “WTF?” he declares in his calm, reasonable title, and then “What have we done?” “Why did it happen?” “How do we take back control?”

A key to understanding this book is what he means by the “we” in that last question. This “we” is, I think, the London media elite. Peston is self-confessed member of this group. As he describes it, he literally hugged a Financial Times columnist for comfort when Trump’s victory was announced. If that isn’t the rock bottom that sends you to Elites Anonymous, then I don’t know what is. And so there he is, standing in the wreckage of old certainties. “It turns out I have not really been living in the United Kingdom,” he writes, “but in a privileged metropolitan bubble or ghetto.” (Add a slow handclap at this point if you want this review to be interactive.)

So how does he respond? With a commitment to hearing the concerns of that much sought-after philosopher the man on the street, followed by a lot of rereporting of last year’s news and a lot of analysis that you’ll have heard if you’ve been buying the papers.

Some of it bears repeating, to be fair. He sees the current crisis as a delayed reaction to the recession and a further delayed reaction to rising inequality in the west. Inequality, he says, was tolerated by the people until the past 10 years of low productivity and stagnation. And then the UK’s adoption of austerity and quantitative easing ended up exacerbating the problem when old-fashioned Keynesian borrowing and spending would have been fairer.

So that’s where the anger came from, says Peston, but how did it spread? His most interesting chapters examine how tech monopolies like Google and Facebook farm our emotions in order to better extract our delicious data. His analysis of how the UK’s official Vote Leave campaign, overseen by Dominic Cummings, weaponised such data to stir up the culture war and win the Brexit referendum is fascinating. Indeed, the most terrifying part of the book is his conclusion that self-interested billionaires with algorithms will soon swing all our elections and referendums.

And it’s here that you can see a more idiosyncratic book struggling to get out. If the malevolent demagogues to whom the disgruntled masses have turned in their anger are no less elitist than those they rail against, isn’t Peston being disingenuous when he dons sackcloth and ashes? Isn’t he really making a case not for dismantling elitism but for trusting his branch of the elite over the others?

He even seems to be slightly envious of the populist millionaires’ more cloak-and-dagger approach. He lets his hand show later in the book when he toys with amping up his “shy” patriotism in order to “nudge loud Brexit-loving, self-proclaimed Englanders to embrace their place in European history, encourage Scots to be proud of how they have always been the brains of Britain and Empire and persuade migrants to steep themselves in the culture of their new home”.

If Peston had called the book How to Be a Member of an Out of Touch but Benevolent Liberal Elite without Anyone Else Noticing I might have found this compelling if a little wrong-headed. Instead he retreats from this clear subtext into more self-flagellation and analysis of recent news. There is a chapter about the rise of austerity politics under New Labour and another about the very recent UK election (possibly a bit premature in its analysis).

In his penultimate chapter, “This Is How We Fix the Mess”, he considers ways of making the disenfranchised feel like they have a stake in the system. It’s all solid stuff. He rails against educational inequality and insecure working conditions. He observes that alarmism about immigration often hides anxieties about failing social infrastructure. He suggests that central banks should roll out different monetary policies for poorer regions, that there should be a wealth tax (albeit a tiny one) and that “apps” might empower better collective bargaining than traditional methods of unionisation.

For all Peston’s empathy for the working class I don’t think he once talks to or quotes a working-class person in the course of the book. Instead he bookends his treatise with moving letters to his recently deceased father, the economist and Labour peer Maurice Peston, whose family evidenced the social mobility of an earlier time. He also punctuates his ideas with daft pop-cultural references, to show, I guess, that he is down with the people. He quotes the grime musician Skepta, names a chapter on Corbyn by torturing a Monty Python joke (“He’s not the Messiah, But Not a Very Naughty Boy”) and refers to “infrastructure and skills” as “the Emerson, Lake and Palmer of improving national competitiveness”. Slang terms like “obvs” and “FFS” sporadically turn up in his prose like cries for help. He even opens one paragraph with an Eagles reference. “We are all just prisoners, of course, of our own device,” he opines, which resulted in an additional “FFS” from this reader.

Peston’s ideology ultimately amounts to enlightened kinder-world Keynesianism wrapped in untrammelled Alan Partridgism. He is the postwar consensus with a Twitter account and a subscription to Mojo. He’s got a good handle on the problems, but the solutions aren’t convincing just yet. Obvs.