The story of a Donegal village, the history of modern Ireland 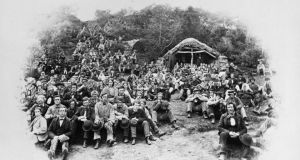 “England,” Bishop Patrick McGettigan told his radical parishioners in 1857, “has conquered the Russians” and “conquered the Chinese”; “do you mean to tell me that you, a small corner of a parish in the County of Donegal, mean to stand up and say you will oppose the law of England?”

In the years after the Famine some of them were doing just that. In a land “steeped to the lips with poverty”, reeling from the unimaginable horrors of the 1840s, a secret society, “the Molly Maguires”, were perpetrating what the state called outrage. They attacked and intimidated those whom they felt had grabbed land, overcharged for food, neglected their elderly, or evicted the vulnerable. They sat in summary judgement of what John B Keane’s Bull McCabe later called the law of the land, and it was enforced brutally: people in Donegal long remembered a priest describing how he stood “ankle deep in blood and milk” in the kitchen of an old man left fatally injured.

Yet by the late 1850s outrage was waning, and by charting its decline in his own home place of Beagh, Breandán Mac Suibhne offers a provocative perspective on post-Famine rural Ireland. In 1856 the ire of the Mollies turned on James Gallagher, the biggest landowner in the townland. Before the Famine the “squaring” of farms had brought a “scarifying transformation” of both the physical and the moral landscape. In place of the rundale of patchwork plots and communal land, everyone was now “only accountable for his own portion”. Amid those changes and the struggles of his neighbours during and after the Famine, Gallagher had adapted and thrived.

No stone in Beagh is left unturned. There are maps of fields and tables of valuations, official records and local seanchas, as the archival shards are painstakingly assembled

When he ignored a threatening letter telling him to stop evicting his subtenants and look after his aging father, the Mollies decided that Gallagher and his wife should be severely beaten. Afraid that he might become embroiled in a murder, an indebted schoolteacher named Patrick McGlynn (who had written the letter) betrayed his fellow Ribbonmen to Constable Daniel Cruise, who set about ending outrage in Donegal.

Not green or orange but grey

In the saga that the informer sparked, Mac Suibhne shows the rise of “the world the Famine made”. This was, of course, a colonial society with “brooding sectarian animosity”, but there were also priests who shared drinks with rectors, anti-establishment Protestants fighting injustice, and “Castle Catholics” forging careers in the “grim, silent castles of authority”. For Mac Suibhne nothing is simple; no one is purely victim or villain; the dominant colour is not green or orange but grey.

There are dramatic events and extraordinary characters: Richard Pennefather, a blind judge weighing handwriting evidence; William Glacken, an alcoholic curate raging against the “savage cruelty” of state and squireen; and Joseph Prost, an Austrian Redemptorist bringing (alongside the aptly named Fr Furniss and Fr Coffin) fire and brimstone to the chapels of Donegal.

No stone in Beagh is left unturned. There are maps of fields and tables of valuations, official records and local seanchas, as the archival shards that fill the footnotes are painstakingly assembled. Mac Suibhne examines a pub’s architectural plans to see if there was enough room for constables to hide, and digs up auction advertisements to reconstruct the drinks – “claret, port, and sherry”, “Guinness’s porter in bottle” – in Daniel Cruise’s cellar. Through it all there is imagination, a commitment to showing people as “more than shadows cold and wan”.

Clerical co-operation was reimagined as defiance. People remembered that James Gallagher had left his father to the workhouse but not that he had evicted his subtenants

McGlynn’s treachery (“the people hate the very name of informer,” he told Cruise) put dozens on trial, but an “aristocratic priest”, Fr Pat Gallagher (no relation of James), brokered a compromise: the accused could renounce their radicalism and swear an oath of allegiance to Queen Victoria. As in the national schools where McGlynn had worked, “Christ and Caesar were now hand in glove”. In the coming decades the Ribbonmen would march towards respectability, joining the growing nationalist coalition.

Yet how it was is not how it was remembered. Clerical co-operation was reimagined as defiance: “I am the judge between God and man,” Fr Gallagher was said to have told her majesty’s court, frightening the authorities into freeing the Mollies. People remembered that James Gallagher had left his father to the workhouse – that he “had not shouldered his burden” – but not that he had evicted his subtenants. Indeed even the existence of those landless families “faded from memory” in an emerging “age of infidelity”.

By the later 1800s people in Beagh were rearing their children in a language not their own, living and farming in ways radically different from their parents: Mac Suibhne argues that 1890 was closer to 1970 than to 1850. People “exchanged themselves for the future” and did not talk so much about the past. “To remember everything is a form of madness,” Brian Friel wrote about the same part of Donegal. It was better to forget, and so the living “walked away from their dead”, abandoning much of what had been dear to them.

A world ended for a generation who became like immigrants in their own land: what bothered a woman known as Máthair Phádaí John Thaidgh on her deathbed was that the next generation “had none of her songs”. The boat to Britain, the United States, or Australia became an inescapable fate for many, leaving behind the “beneficiaries of emigration”, “the chosen ones” who would inherit the squared farms.

Yet many of the left behind ended up feeling trapped on land where “melancholy rose like damp”. The revolutionary narrative of shared national suffering papered over the cracks of the past: who had done what, who had left or been forgotten, what alternatives never came to be.

This is an uncomfortable story. Did “acts of betrayal” make the people and the place? Did we all become heirs of James Gallagher, reaping and sowing in a world where everyone is accountable only for their own portion? Mac Suibhne worries that the shrewd might say that “the boy should have known better than to make a history of the homeplace”, that he has become the informer or made himself the judge; that the people of the past might have told him “níl coir san fhocal nach ndeirtear”.

Yet silence became modern Ireland’s malignancy, its inescapable infidelity to itself, and asking awkward questions remains a vital task. It is impossible not to be moved by the humanity with which Mac Suibhne writes of his ancestors and their neighbours, or to be provoked by his unconventional epic. From a local row he has crafted an extraordinary work of history that makes its own importance.

Dr Christopher Kissane is a historian at the London School of Economics and Political Science; you can read an extract from The End of Outrage here

Film-maker Pedro Costa: ‘There is no Beckett or Joyce in cinema’
Real news has value SUBSCRIBE